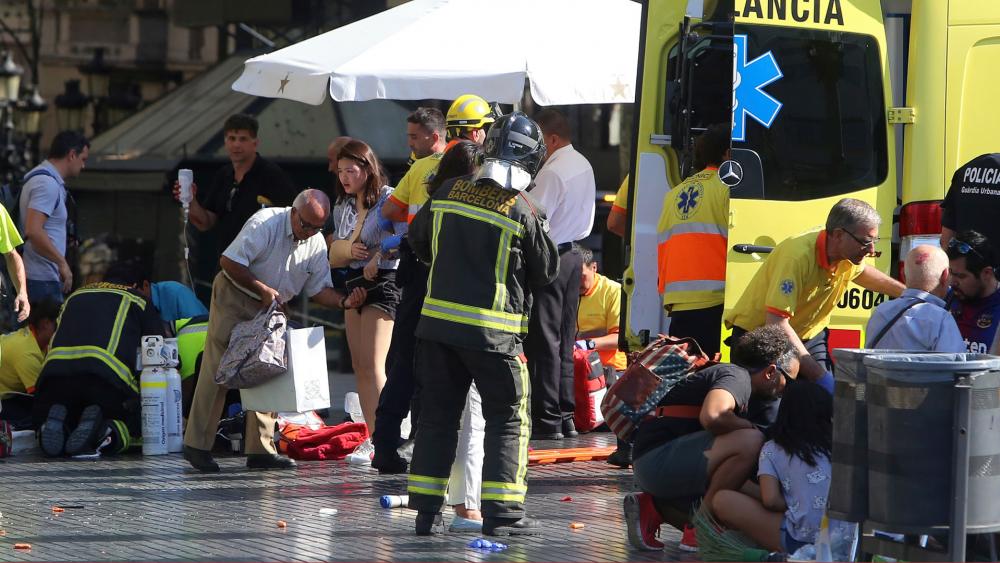 Chuck Holton in Barcelona: 'People are not afraid'

One American is confirmed dead among the 14 victims in Spains three terror attacks in the last two days. Five terrorists were shot dead Friday after the third attack. Police there are still searching for other suspects in the attacks.

U.S. Secretary of State Rex Tillerson told reporters Friday in a state department briefing that an American was killed in the attack in Barcelona. However, he did not release a name.

It all began with two vehicle attacks that came within hours of one another on Thursday.

The first one occurred late Thursday afternoon in Las Ramblas, a popular tourist spot in Barcelona when terrorists plowed a van into pedestrians, killing at least 14 people and injuring more than 100 others.

"I didn't see any of the bodies or anything, or the driver, but I caught it out of the corner of my eye and heard it right behind me," explained one witness.

Police later arrested two men. One of them was Moroccan Driss Oukabir, who allegedly rented the van used in the terrorist act. The driver of the vehicle was still at large.

A second attack came early Friday morning 70-miles away in Cambrils with another pedestrian attack along a boardwalk. This time, six people were injured before police gunned down the terrorists. All five of them were wearing fake suicide vests and investigators say they were also planning some kind of gas attack.

One witness to the Cambrils attack said he saw a man running down the road shouting something.

"Within 30 seconds the police was already there there, jumped out of the car, started shouting at the guy, the guy then saying something else again and then 'pop, pop,' did a couple of shots and fell down," the eyewitness said.

The CIA reportedly informed Spain two months ago that Las Ramablas was a target. The warning came  after jihadists said they planned to spread terror to popular Mediterranean tourist spots.

Police say the two incidents may have been linked to an incident in another Spanish city on Wednesday.

In Alcanar, two explosions at a house caused the death of one person and injuries to 16 people. Police originally thought the explosions were the result of a ruptured gas line, but later discovered that the residents had been preparing explosives.

Spanish authorities say some of the injured in the Barcelona attack are in critical condition, so unfortunately the death toll may rise.

The Islamic State has claimed responsibility for the Barcelona attack and International terrorism experts say many jihadists who joined ISIS have been chased out of Syria and Iraq and are now returning home.

That means more Barcelona style terror attacks may come to Europe and elsewhere in the days ahead.