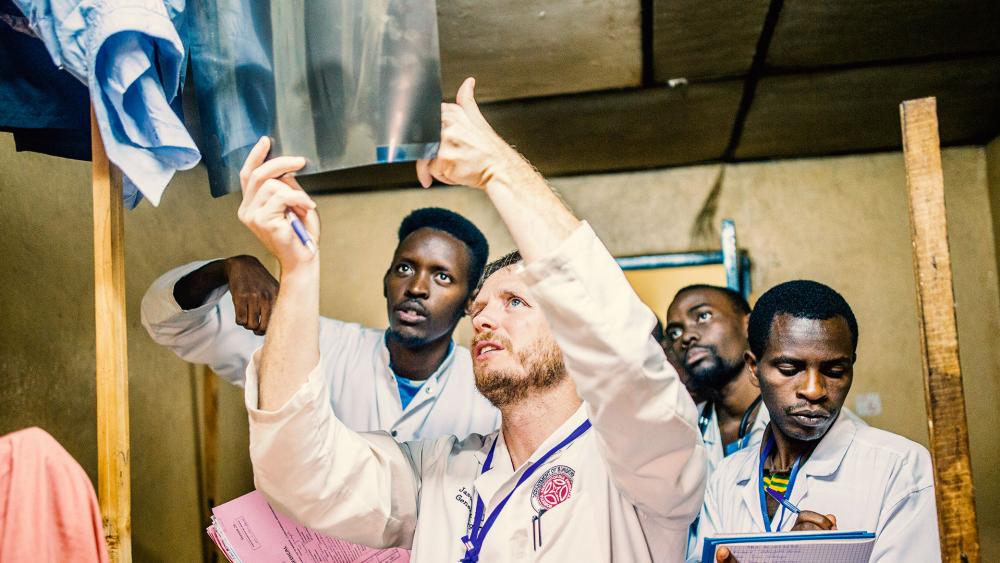 It's poor, hungry and recently declared the world's unhappiest country.

But now there's hope as a wealthy Jewish philanthropist and Christian doctors work to help some of Burundi's most vulnerable.

This landlocked nation in the heart of Africa is easy to miss on a map. Roughly the size of Maryland, Burundi is one of the continent's smallest countries. It used to be the third-poorest in the world. Now it's number one.

In 2013, American Jason Fader moved his wife, Heather, and their two kids to Burundi to serve as a missionary doctor in a remote part of the country.

Fader's home away from home is Kibuye Hope Hospital, a Christian facility located in the central part of Burundi. Kibuye was a ministry of the Free Methodist Church in Burundi since the 1940s but is now under the care of Hope Africa University. Fader is the assistant medical director at Kibuye Hope Hospital.

14 Surgeons in a Country of 10 Million

"Kibuye Hospital is about three hours outside the capital city. Between here and there there's no surgeon. The majority, all except for me, of the surgeons in Burundi work in the capital city," Fader said.

And for a population of 10 million people, there are only 13 surgeons, with Fader becoming number 14.

CBN News was granted exclusive, behind-the-scenes access to Kibuye's operating rooms as Fader and other physicians prepared for surgeries. "I typically schedule one or two surgeries a day," Fader told CBN News as he scrubbed his hands preparing for an operation. "{More often than not} We end up doing 10 surgeries a day."

Like many other medical missionaries serving across Africa, Fader raises his own support.

"It would be difficult to find a place in the U.S. where I could have even a smidgen of the impact that one surgeon can have here in the middle of Africa. There are 2 million people in this area that have no surgeon and I'm happy to be here to care for them," Fader said.

Half of Burundi has no access to potable water. Some 70 percent of the nation lives below the poverty line. There's no healthcare to speak of, so as you can imagine, this small Christian hospital here in a remote corner of Burundi acts as a lifeline for tens of thousands of people.

Eric and Rachel McLaughlin, John and Jessica Cropsey and Alyssa Pfister also joined the Faders in Burundi as missionary doctors. John Cropsey is one of only three ophthalmologists here.

"You've got cross-cultural conflict going on; you've got stressful work, limited resources," Cropsey described to CBN News. "During dry season, we can have as little as two hours and even sometimes no power during the day."

Rachel McLaughlin says she's one of just 20 OB-GYNs in Burundi.

CBN News was in the operating room with McLaughlin as she prepared for a C-Section.

As is customary at Kibuye Hope Hospital, all the missionary doctors begin each surgery with prayer.

"Lord God, I thank you for this chance to be here today," McLaughlin prayed while holding the hands of woman about to deliver her fourth child. "We lift this woman and her baby. I pray for a safe delivery in your name I pray, amen."

Following the Call of God

Faith in Christ and the opportunity to help the less fortunate are just some of the reasons that compel these doctors to serve in less-than-ideal conditions.

McLaughlin admits that at times, "It really feels like we are on our own out here and that can be hard."

She and the other medical missionaries serving at Kibuye are confronted daily with just how limited resources they have to work with.

"In a typical America hospital, where you have so many resources at your disposal, to be here with so little can be a huge challenge," McLaughlin admits. But she says the challenges are worth it.

"People say that in missionary medicine, your highs are higher and your lows are lower; We really experience that to the extreme here in Burundi," McLaughlin said. Dr. Alyssa Pfister is a pediatrician at Kibuye Hope Hospital.

"We thought the opportunity was really great to come to Burundi to disciple and train medical students and hopefully residents in the future, in order to be physicians who can care compassionately for their people in Jesus' name and provide excellent healthcare," Pfister said. So here's an interesting angle to this story: Thousands of miles from the hospital, in downtown New York City, Mark Gerson, a Jewish businessman, has decided to personally get involved in helping these Christian medical missionaries change the destinies of some of Africa's poorest.

Gerson is the co-founder and chairman of Gerson Lehrman Group .

"The Torah, the Bible, tells us 36 times, more than it tells us anything else, to love the stranger and who in the world is more of the stranger than the African poor in need of medical care," Gerson told CBN News from his office in Manhattan.

For several years, Gerson and his wife, Erica, have given millions of dollars to support missionary doctors across Africa. "It's been an honor and a privilege for my wife, who is a rabbi, and I to partner with these -- and I chose this term carefully -- these 'sacred people,' these Christian medical missionaries, who are sacrificing everything, to deliver medical care to the poor in Africa who otherwise would simply be without it," Gerson said.

Fielder says through his friendship, Gerson has seen first-hand the dedication of these missionary doctors.

"Medical missionaries tend to come for years or decades and stay and learn the language and learn the culture and develop deep relationships in their communities," Fielder told CBN News. "He {Gerson} sees how far his generous giving can go here in Africa and he sees the return on his philanthropic investment." "When I first saw that this prize was from a Jewish entrepreneur I certainly did a double-take," Dr. Fader admitted.

But soon he knew there was more to Gerson than just his generosity.

"I think it also speaks to the depth of Mark's faith; he sees the care for the poor, the care for the stranger as part of his faith tradition and I have a lot of respect for that," Fader said.

Fielder says a prize of this magnitude, to one African hospital, is far reaching.

"The L'Chaim prize will provide half-a-million dollars to Kibuye Hope Hospital which will help it complete a new surgical building, start an internship -- the first in the country for medical school graduates -- renovate a laboratory in the capital, and help about 350 people walk again with orthopedic supplies," Fielder explained. “The King will reply, ‘Truly I tell you, whatever you did for one of the least of these brothers and sisters of mine, you did for me.’

Gerson insists there's no one better who delivers a higher return on investment than Christian medical missionaries serving in Africa.

As an example, he points to what Dr. Fader and his team at the hospital did in 2015.

"He {Dr. Fader} enabled 35,000 in-patient and out-patient visits, he enabled 1,200 surgeries and he enabled 800 cataract operations all for half-a-million dollars," Gerson explained. "That to me is the most extraordinary ROI {Return On Investment} that anyone deploying capital, commercially or philanthropically, can expect."

Fader says Gerson's generous gift will continue to touch and heal the lives of countless people across this nation.

"Kibuye Hospital, you know, is not like a hospital in the U.S. Sometime we struggle with running water and electricity and basic infrastructure," Fader said. "And yet, it's amazing how much you can do with so little. You know we are not doing laparoscopic esophagectomy, but we are helping people walk. We are saving lives at the rate of sometimes, thousands per a year."