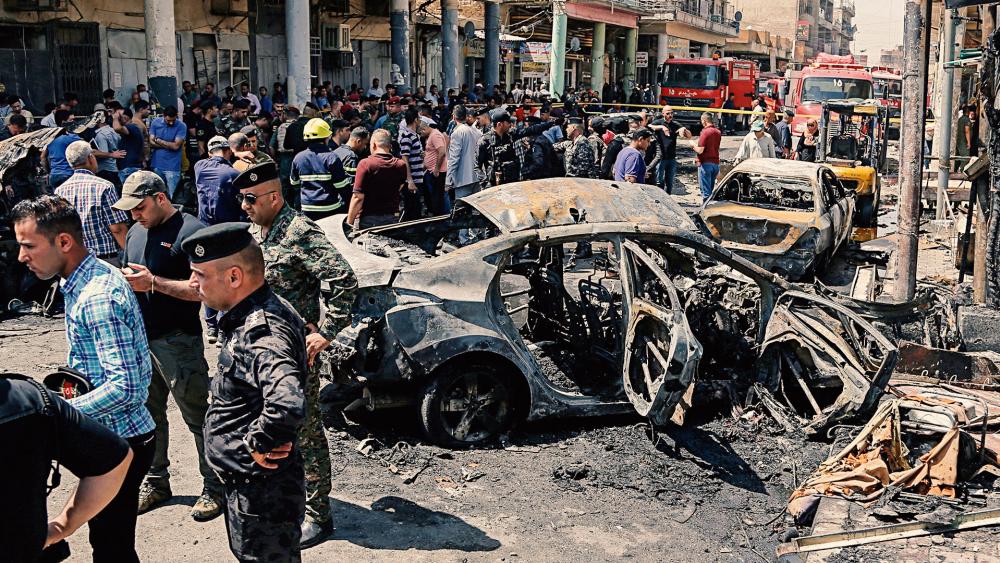 The Islamic State is claiming responsibility for one of the attacks, which took place just days after the start of Ramadan, the Islamic fasting month.

A closed-circuit camera captured the moment a bomb detonated on a busy downtown avenue outside of a popular ice cream shop.

Ice cream and blood stain the floor. But ISIS underestimates our resolve. Iraqis will be back on these very streets tomorrow night pic.twitter.com/i83YoDZXMe

Videos posted to social media show wounded people crying for help on the sidewalk outside of the shop.

At least 15 people were killed and another 27 were wounded.

The second attack happened in the downtown area of the city during rush hour.

A car filled with explosives went off near the state-run Public Pension Office in Baghdad's busy Shawaka area, killing 14 people, a police officer said. At least 37 people were wounded.

The attacks happened after sundown when most families break their fast for Ramadan and go to the city's restaurants and cafes.

Iraqi Interior Minister Qasim Mohammad al-Araji told authorities they would "track (ISIS) down wherever they may be."

"They targeted a group of civilians; families, women, and children in these nights of Ramadan and this is clear evidence that this organization is a terrorist one trying to kill civilians by any means," he told reporters.

Last year during Ramadan, close to 300 people were killed in a massive suicide bombing in Karrada. It was considered the deadliest single attack in the Iraqi capital in 13 years of war, The Associated Press (ITALICS) reports. The Islamic State also claimed responsibility for that attack.

Tuesday's attacks come as ISIS jihadists are steadily losing more territory to U.S.-backed Iraqi forces in the battle for Mosul.