Toronto Blessing: 'The Greatest Thing that's Happened in the Church in the Last 100 Years' 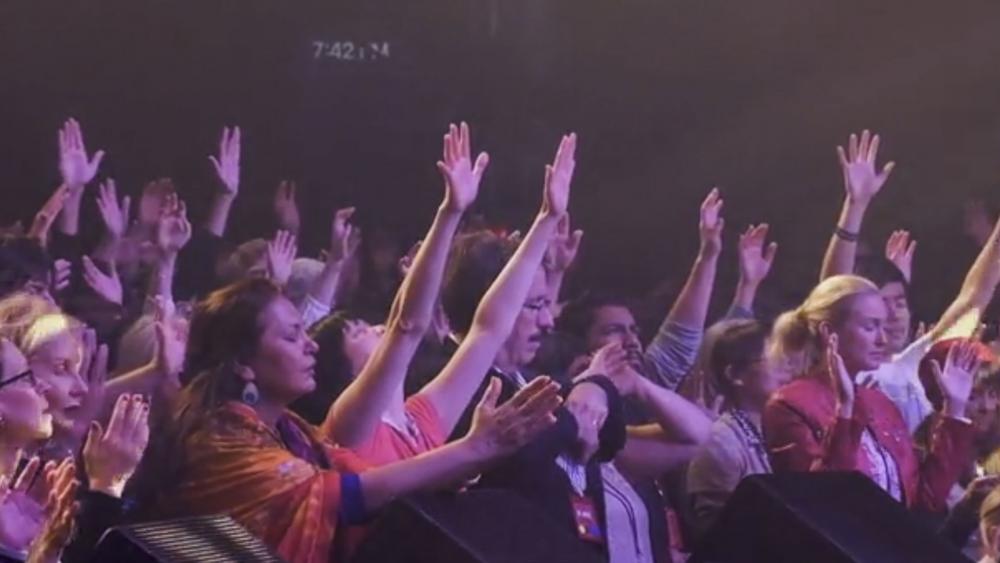 TORONTO – The Christian world is crying out for a revival so great, it will transform the world. But a once small church on the outskirts of this Canadian metropolis showed a possible path there starting in 1994 with one of the most powerful revivals of the past few decades.

There were some critics sniping from the sidelines, but God rained down many miracles, signs, and wonders and millions of lives were transformed.

This revival known as the Toronto Blessing began at Pastor John and Carol Arnott's church next to the Toronto airport, where guest speaker Randy Clark was ministering. Suddenly the Holy Spirit took over the service. This happened again powerfully day after day for more than a dozen years, drawing curious and spiritually-hungry people from around the world.

When Heidi Baker was So Burned Out, She Wanted to Go Work at K-Mart

Heidi Baker came from Mozambique, where she was a worn-out missionary, and she saw her life radically transformed in the Toronto church.

"I was so burned out, even though I have a Ph.D. in Systematic Theology, I didn't want to teach theology," she told CBN News. "I literally wanted to work at K-Mart. I was that tired."

She arrived at the Arnotts' church both spiritually and physically sick.

"I had double pneumonia. The first thing that happened: I was completely healed," Baker stated.

Right after that healing, she had a vision.

"Then I saw Jesus – burning eyes of fiery love. God crashed in on me."

Now this former missionary burn-out and her husband lead IRIS Global, a ministry which has started some 11 thousand churches.

She said of that time in Toronto with Jesus, "He ripped the 'no' out of me – the eyes, the fiery eyes of Jesus. Now I've been to 109 nations, preaching this glorious Gospel."

Controversial Signs & Wonders, but They Made People Fall More in Love with Jesus

The Toronto Blessing was certainly lively.

As Pastors John and Carol Arnott describe it in their book Preparing for the Glory, "Laughing, shaking, crying, falling down, speaking in tongues – these were the things that would happen when the Holy Spirit touched people. There were reports of a gentleman roaring like a lion. Others had visions, and many were so overcome under the power that they couldn't get up off the floor."

John Arnott told CBN News that before the revival, "We were used to seeing people receiving the Holy Spirit and maybe falling down one at a time. I'd never seen a whole room fall out like…boom!…they're all out."

But Arnott saw great fruit coming from this "carpet time," as Jesus often did a loving work in people's hearts while they were down.

"People came and they didn't care – nor did we – whether they were Pentecostal or Catholic or Methodist or Baptist or charismatic. Whatever they were, they all just seemed to get leveled. The anointing is a great leveler. And so, people were on the floor together and they just fell in love with Jesus," Arnott explained.

Some Said it was the Devil; Those in It Said Test the Fruit

As some judgmental religious leaders heard of these events, they warned the signs and wonders were of the flesh…or maybe even of the devil.

Such condemnations irked both Arnott and Dr. Randy Clark back during the revival, and still irk them now. But both admit the signs and wonders were certainly extraordinary.

Clark recalled, "John Arnott and I would sometimes see something happening and I'd say, 'Ever seen that?' And he'd say, 'No, I haven't. Have you ever seen it?' 'No, I haven't.'"

Arnott remembered praying, "'I'm pretty sure this is You, Lord, but what's going on here? Because it seems like it's chaos.' But then we started hearing the testimonies."

Those testimonies were always about God healing, touching or transforming lives for the better in this revival.

Clark said to Arnott at the time, "'I don't know what it all means. Let's just not try and kill it. Let's just wait and see if there's good fruit that comes out of it.'"

And much fruit did come, as many of those experiencing the signs, wonders, and miracles of the Toronto Blessing found those same signs, wonders and miracles followed them home and burst out when they returned back to their own congregations. That led to millions around the world having their faith built up or restored and a contagious love growing in their heart for God.

Arnott said of the critics, "You cannot make your mind and your current experience the final arbitrator on whether something is God or not. Because He's always doing something new. However, it will always glorify Jesus and the fruit of the encounter will always be good."

Prophets Predicted the Toronto Blessing to the Very Day it Started

As it was all happening, Clark recalled he wasn't really worried because his Christian education showed him amazing happenings like he was seeing are typical.

"I learned in seminary about the phenomena and manifestations that almost always occur in times of revival," explained Clark, founder of the ministry Global Awakening.

This author of Eyewitness to Miracles: Watching the Gospel Come to Life, also had the assurance of prophets in the Body of Christ.

"This was predicted by the prophets before it ever happened, even to the day, even to the year," Clark insisted.

As critical Christians sniped at the revival, Arnott was a bit shocked.

"The surprising thing to me was that not everyone liked it," he said. "Some professing Christians didn't like it."

He was particularly hurt some other spiritual leaders were saying it was ungodly.

"You get respected leaders that you honor saying, 'Have nothing to do with it. It's not God,' it puts a fear of deception in the heart of people," Arnott warned.

"I think we need to have the common sense to realize that God's a lot bigger than we are. And therefore, He's going to do things we don't understand," continued Arnott – now an overseer in the Partners in Harvest Network of Churches. "So when He does things we don't understand, you don't automatically reject it. You say, 'Huh, I wonder if God's doing something new that's beyond what I know?' And if you take that approach and say 'Lord, where is this in the Bible?' He'll show you."

As the revival grew and it became more obvious the Holy Spirit was indeed in it, Arnott recalled he found himself saying to critics, "'Go get yourself a bigger God. You need to have a God who is able to do exceeding abundantly above all that you can ask or think. And don't put everything down that you don't understand as the devil all the time.'"

In Preparing for the Glory, Arnott writes of God, "His order is different from ours. When a man plants trees, he plants them in nice, neat rows, like an orchard. When God plants trees, we get a jungle or a forest, wild and not very 'neat.' Which order would you prefer? I mean, I like orchards just fine. But there's just something about the wildness of the forest, isn't there?"

Even for Jesus: the More Miracles, the More Persecution

Arnott found some peace in the midst of the controversy and miracles when the Lord said to him, "'The more Jesus did those kind of miracles, the more they persecuted Him.' So I thought, 'Well, okay, let there be controversy.' And the final thing was He said to me one day, 'John, even Jesus could not please everybody. Don't worry about it. Just keep going.' So that settled it for me. We just kept going."

While doubters may have questioned the reports of miracles, Heidi Baker, co-author of Training for Harvest, was certain that her Toronto Blessing experiences moved her much closer to God.

This missionary from Mozambique recalled at one service during her first visit, "I ran to the altar. I lifted my hands and I began screaming, 'YES!' And the fire of God hit me. There was no altar call. And Randy Clark, who I'd never met and didn't know who I was. said, 'God wants to know do you want the nation of Mozambique?'"

Baker continued, "And I screamed 'YES!' Then fire hit me. Power hit me. I started vibrating with power, power, power. I screamed, 'God, I'm going to die!' He said, 'Good, I want you dead.' You see, you've got to die to self to really live, to really carry the Glory of God."

Left Her Limp Like a Rag Doll for a Whole Week

And that's not even the wildest thing God did to Baker.

Right after that, she said, "For seven days and seven nights, He left me incapacitated. I had to be carried. My husband carried me. All these people had to carry me. If I needed water, they had to bring me water."

Folks would have to roll her in and out of her Toronto hotel in a luggage cart.

She said, "Then they'd have to carry me to the restroom. It was the most humbling, powerful time of my whole life."

Why would God do such a thing? Baker said she had to learn to love and depend, not just on Jesus, but His people as well.

"He said, 'You can do nothing without the Body of Christ.' And He allowed me to be so completely incapacitated that I had to learn for seven days and seven nights that not only did I need Jesus, I needed His Body," Baker explained.

Don't Judge what God Can or Cannot Do

She said of that week, "It was completely, totally life-transforming. And I've never, ever been the same."

In the face of such miracles, Arnott suggests people not judge what God can or can't do…will or won't do.

Because the pastor believes an even more powerful move of God with even more extraordinary signs and wonders is coming, and harsh critics will miss out on what could be an amazing blessing in their own lives and those of the people they influence.

"I'm sorry that not everyone liked it, not everyone wanted it," Arnott said of the Toronto Blessing. "I'm sorry about the guys who spoke against it. They missed the greatest thing that has ever happened in the church, in my opinion, in the last 100 years. And so…if you want to miss it, miss it. But I don't want to miss it."