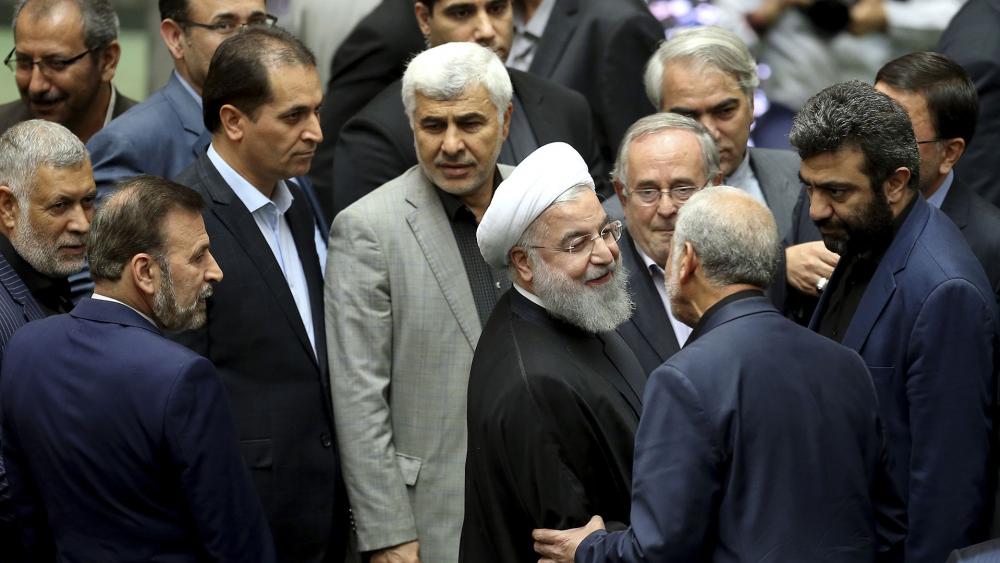 Hours after the United States slapped Iran with some of the toughest sanctions ever to hit the Islamic regime, residents of the capital city of Tehran, already facing economic dire straits, are bracing for even more pain.

"The sanctions have greatly affected our lives a hundred percent," said Mostafa Bavafa, a resident of Tehran. "Devaluation of the currency has endangered my life and the people's lives. The psychological pressure has made people stand in lines to buy dollars."

Everything from food and transportation to housing and medical costs has risen dramatically.

"High prices negatively impact every individual and every family," said Sanaz Gharibi, another resident of the capital. "People used to be happier, but now for everything they want to buy they have to calculate carefully to make sure the spending is appropriate."

Mina Sholeh, who is visiting Tehran, fears this second round of sanctions will lead to more unemployment and hyperinflation.

"Prices for clothes and shoes have gone up very high, and a lot of people are not able to buy these things anymore. The prices have multiplied," said Sholeh.

Some hope the economic pain will bring Iranians to the streets to protest the Islamic regime and call for its end, as they did last year and in 2009.

The White House says the aim of the economic penalties is simple:

"Our objective is to starve the Iranian regime of the revenue it uses to fund violent and destabilizing activities throughout the Middle East and, indeed, around the world," Secretary of State Mike Pompeo said Monday. "It is completely clear the Islamic Republic of Iran is the destabilizing force in the Middle East today."

The US Treasury Department, in what it said was the largest single sanctions designation, levied penalties on more than 700 Iranian individuals, entities, aircraft and vessels, including major banks, oil exporters and shipping companies.

"We are watching the Iranian regime with laser focus. If they try to evade our sanctions, we will take action to disrupt their activity time and time again," vowed US Treasury Secretary Steven Mnuchin. "The maximum pressure exerted by the United States is only going to mount from here. Companies around the world need to know we will be strictly enforcing our sanctions."

In all, the US government has sanctioned more than 900 Iran-related targets in the last two years. Secretary Pompeo says the Islamic regime has a clear choice:

"It can either do a 180-degree turn from its outlawed course of action and act like a normal country or it can see its economy crumble," Pompeo said.

CBN News Senior International Correspondent George Thomas weighed in on why the latest round of US sanctions against Iran is the most significant.

Meanwhile, Washington gave 180-day exemptions to eight countries to import limited amounts of oil from Iran. Brian Hook, an official at the US State Department, said China, India, South Korea, Japan, Italy, Greece, Taiwan, and Turkey will have waivers that expire after 180 days.

"Every 180 days we will assess our progress of getting to zero (oil imports) while ensuring a stable oil market," Hook told the Financial Times. "That gives us more freedom to reduce the import of Iranian crude without increasing the price of oil. We are very focused on a path to zero as quickly as possible."

White House officials say the president's aim is to exert maximum pressure on the Islamic regime.

"The aim is to drive Iranian oil exports to zero," John Bolton, national security advisor, told "Fox Business News." "We're working with other countries to get alternative supplies for countries that are buying and I think that's critical over an extended period of time. But let's be clear – we're going to have sanctions that even go beyond this. We're not simply going to be content with the level of sanctions that existed under Obama in 2015."

Thousands of Iranians responded to the new sanctions by chanting, "Death to America – Death to Israel" and burning US and Israeli flags.

"The US administration appears to believe that imposing illegal, draconian sanctions on Iran will bring about such pain to our nation that it will force us to submit to its will, no matter how absurd, unlawful or fundamentally flawed its demands are," Foreign Minister Mohammed Javed told reporters.

Iran even squeezed in military drills in the northern part of the country in defiance – as the government vowed to circumvent US sanctions.

"We have weathered difficult times in the face of 40 years of American hostility, relying solely on our own resources and today we and our partners across the globe will ensure that our people are least affected by this indiscriminate assault in the economic warfare that directly targets the Iranian people, notwithstanding hypocritical claims by the Trump administration to the contrary," Javed said.

Iran's Supreme Leader Ayatollah Ali Khamenei, speaking on the eve of the anniversary of the November 4, 1979 takeover of the US Embassy in Tehran, used the occasion to accuse Washington of waging military, economic and propaganda wars.

Khamenei told the crowd that America's influence was in decline.

But it is America that's putting the squeeze on the regime at the moment and the White House says that pressure will be relentless unless Iran changes its revolutionary course.

Iranian President Says Regime Will Neutralize Effects of US Sanctions