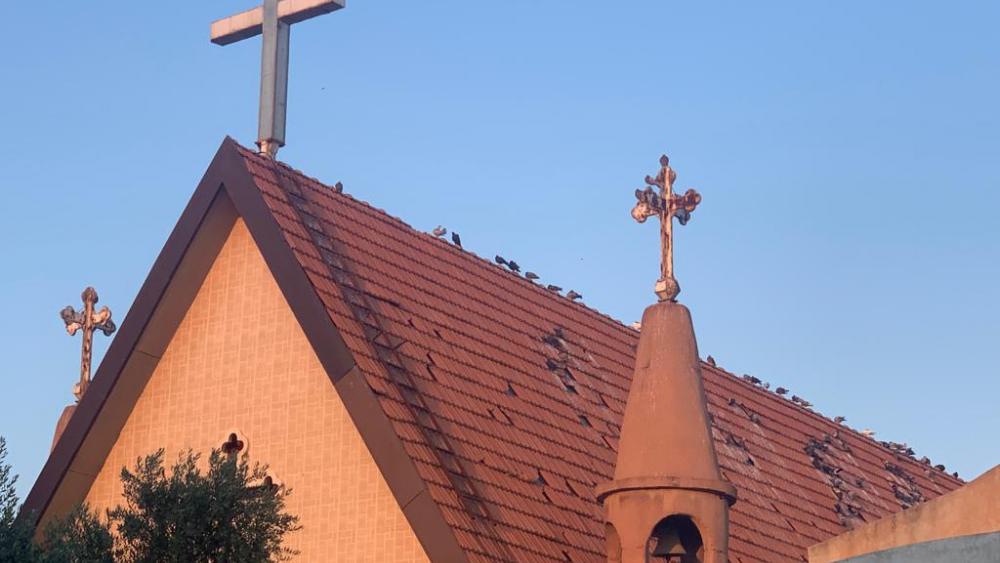 You may never have heard of a town called Tel Tamer.  But right now it’s at the epicenter of a battle by world powers for control of Northeast Syria. It’s also the home to many Christians.

Here are some pictures of what these Christians look like and what one of their churches looks like.  It’s called the Virgin Mary Church of Tel Tamer.  The church and the people are pretty much like you and me and any other Christians who go to church, receive communion and pray. Here are some videos taken by Dave Eubank of the Free Burma Rangers. He introduces us to one of the Christians in the town and shows us a couple of videos of a church service.

In the video below, Eubank introduces one of the Christians of Tel Tamer, Syria and also shows the Virgin Mary Church building.

Eubank quietly shares about the ongoing service in the church.

Even with war raging a few miles away, these Christians in Tel Tamer are practicing their faith.

They look a lot like you and me and Christians who could be from Poland, Italy or Chicago.  But they’re in Tel Tamer, Syria, that epicenter of a global battle.

That means unlike you and me these Christians are directly in the line of fire of a NATO army from Turkey and their Jihadi allies who go under the banner of the Syrian National Army.  When Turkey invaded Northeast Syria on October 9th, they didn’t seem to use many of their own troops but these Jihadist soldiers who some call ISIS 2.0.  You would have to ask Turkish President Recep Erdogan why but they are his front line troops in the invasion.  It appears he reserves his military to conduct airstrikes, drone attacks, and artillery.

But it's these Turkish backed Syrian rebels and jihadists who are planning to “cleanse” Tel Tamer of its people and its Christians.

They’ve already done it to Tel Tamer’s sister town up the road called Ras al Ain that they captured several days ago.

Bassam Ishak, the US Representative of the Syrian Democratic Council represents a new democratic government in Northeast Syria.  He explained to CBN’s Faith Nation how these jihadists  “cleansed” Ras al Ain of Christians.

"They were told by the pro-Turkey rebels that they have orders not to kill the Christians, but you have no land here anymore.  So they are not able to go and collect their harvest.  And what this amount to is soft ethnic cleansing.  Because if you lose your source of income, you lose your land, you leave.  This is what the pro-Turkish jihadis are doing."

Ishak added the Syrian National Army is "… similar to ISIS, (with) the same mindset as ISIS, those pro-Turkish jihadis who are coming and now threatening their town (Tel Tamer) … We need the US to step in.”

Now they are on their way to Tel Tamer.

Two days ago, the Syriac Union Party who speaks on behalf of these Christians issued a press release describing their plight and pleading for help.

You can hear the quiet desperation in between the lines

Barsom wrote “A few days ago, Turkey and the armed groups associated with it launched an attack on the areas of Tel Tamer and the surrounding villages.  These areas are majorly populated with our Assyrian Syriac (Christian) people.  The situation is now serious.”

He called on the US and Russia:

“We call on the United States and the Russian Federation, which have concluded a cease-fire agreement with Turkey, to put pressure on it to stop its attack and its progress towards those areas.”

“We also consider that the silence of America and Russia on this will encourage Turkey and contribute to what will happen to the Christians there from extermination and displacement by these terrorist groups.”

He also called on the “international community” which includes the European Union, NATO of which Turkey is a member and the United Nations.

“We also appeal to the international community, in general, to move against the Turkish policies and plans, which are the main supporter of terrorists in Syria … the best proof of this is the presence of senior ISIS leaders in their areas of influence and under their protection.”

What will the Vatican say?  What will Evangelicals in America do?  What about the Christians of Europe, Asia, and Africa?

The world is waiting … and so are the Christians of Tel Tamer.