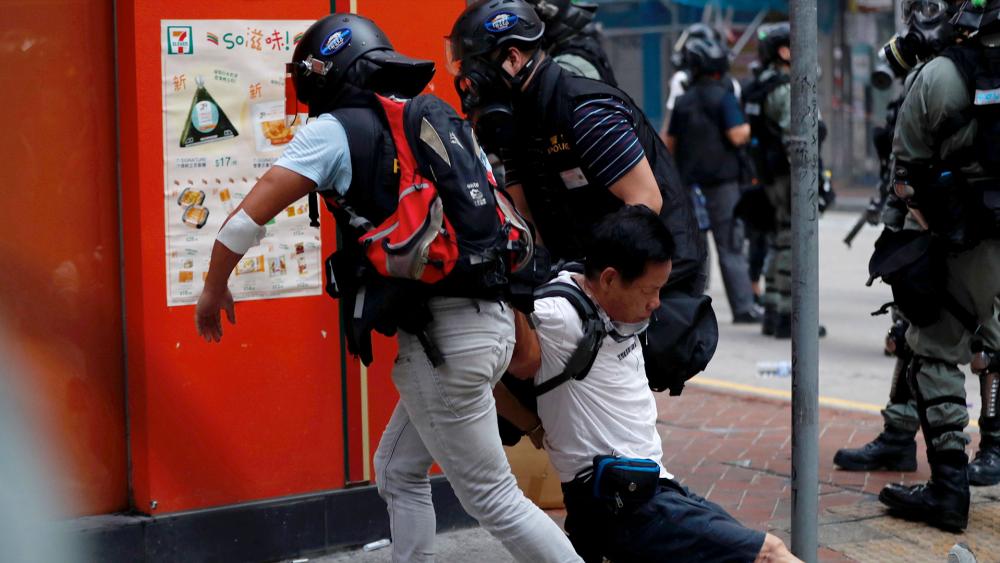 An injured anti-government protester is aided by others during a clash with police in Hong Kong, Oct. 1, 2019. Thousands of black-clad protesters marched as part of multiple pro-democracy rallies. (AP photo)
6090964426001

HONG KONG – China celebrated the 70th anniversary of its communist revolution by showing off its military power Tuesday. It comes after violent clashes erupted over the weekend here in Hong Kong and protests continued today against Beijing's communist regime.

The military parade showcased China's growing emergence as an increasingly ambitious global power, highlighting China's rapidly developing advanced weapons technology, including missiles that reportedly can hit the US in 30 minutes.

Rows of soldiers marched in lockstep past President Xi Jinping and other leaders in Tiananmen Square. China's "People's Liberation Army" is the world's biggest military with two million men and women in uniform.

President Xi said no force – neither Hong Kong protestors nor a US trade war – can stop China's rise. He also vowed a better relationship with Hong Kong, but democracy protestors say they want to see China take steps in the right direction by granting the right to universal suffrage among others.

As China's government celebrates communism, Hong Kong protestors are determined to counter the celebration with calls for freedom.

One protestor was shot and critically wounded during demonstrations Tuesday. The weekend also brought violent confrontations for the pro-democracy protests as the peaceful commemoration of the Umbrella Movement five years ago ended in chaos. Protestors threw bricks and petrol bombs at the government headquarters while police dispersed them with water cannons and tear gas. Protestors even set fire to a Metro station entrance.

The show of rage and anger is their attempt to overshadow the grand celebration of China's 70th Foundation Day.

What may concern Beijing is that even very young secondary students are willing to leave their classes to show defiance towards Hong Kong and Chinese government leaders.

These kids are shouting "Revival in Hong Kong! Revolution of our times." They are serious because they know that they are the ones who are affected the most when their rights and freedoms under the one-country two-system agreement are being eroded by China and their leaders.

But pro-democracy student leader Joshua Wong is optimistic especially after giving testimony before the US Congress where the Hong Kong human rights bill is close to gaining approval.

That has angered the Chinese Government.

Wong told CBN News, "When the human rights and democracy bill has already passed both the Senate and the House committee level, we can just make Hong Kong people be aware how international community stand with Hong Kong. I hope our movement can move with victory. When we face difficulties we are still optimistic to realize that God will make a way."

In the midst of the danger and chaos, a group of Christians have come out of the four walls of the church to minister to the young protesters.

Pastor Roy Chan, leader of Good Neighbors Ministry, says, "There's the spirit of sacrifice and love. They don't want the children to get hurt. Just like what Jesus has done."

The members, mostly the elderly, stand in the gap. They brave the tear gas and rubber bullets and form human chains just to protect the young people from police brutality.

Pastor Chan says the youngsters are beginning to like the church more because they see and experience the love of God in action. They know what God is doing and what the church has done. Pastor Chan, adds, "I think I see God's hand. A big love hand."