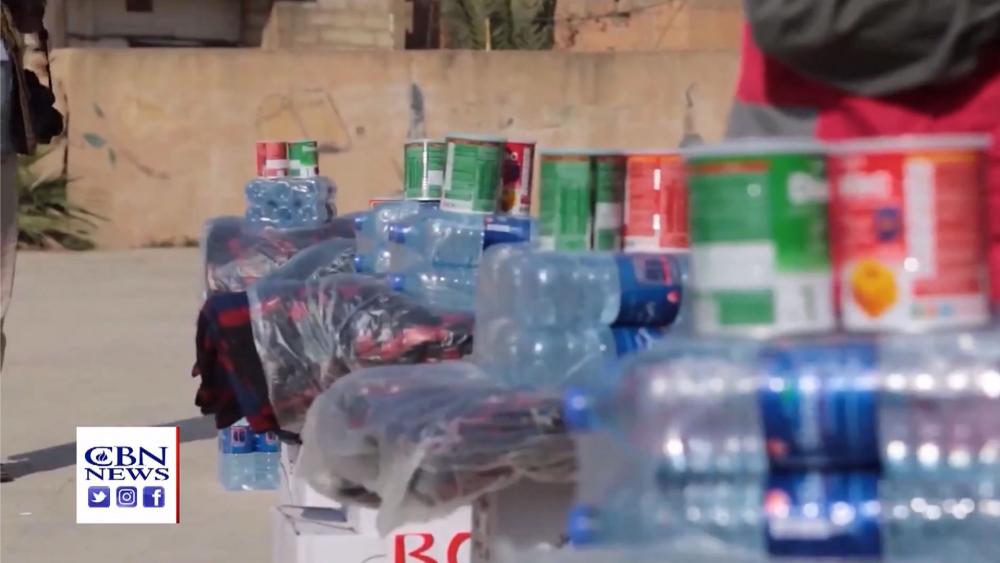 HASAKA, Syria - The Turkish invasion of northern Syria has caused a huge humanitarian disaster with up to 160,000 people displaced and in need. But some relief organizations have been able to get into the war zone to help refugees.

CBN News Senior International Correspondent George Thomas has made it into Syria with CBN's Operation Blessing and its partner, the Barzani Charity Foundation, a Kurdish relief agency.

He reports the charity aid organizations have chosen the Hasaka area due to the thousands of Syrian refugees who have taken shelter there from all of the fighting that's occurring to the north of the city.

"Today they're distributing close to about 20,000 blankets," Thomas said. "They have about 5,000 boxes of food. They have thousands upon thousands of bottled water and other essential supplies."

"This is all very critical. The estimate is that they'll be able to use these materials at least for a month," he explained. "And that way to sort of getting through this difficult transition. And this is only going to be one of many convoys that Operation Blessing and Barzani Charity Foundation are partnering together."

Operation Blessing is on the ground in #Syria working to bring relief to Syrian and Kurdish refugees fleeing the Turkish invasion.

You can help those facing crisis and disaster by texting "OBRefugee" to 71777 or by going to https://t.co/LPaRGGYYeI pic.twitter.com/lJcS7JeMGE

Operation Blessing reports it is working closely with the foundation and providing essential aid kits. The kits include food, hygiene items, milk, blankets and more to provide for the refugees' immediate needs.

The Kurdish relief agency greatly appreciates OB's support, according to the Operation Blessing website. Musa Ahmed Agha, president of the Barzani Charity Foundation, said, "This is an important partnership. We've worked together in the past to help protect the lives of the people in this region, so I am always happy when dear brothers who care for us want to help again."

"It was a big mistake to withdraw the army. It really doesn't help us out especially the Christian people over here. If I had a message I would say if there's anything else they can do try to get back here it would help a lot," one refugee said. "Prayer helps a lot, financial support, any kind of aid... Pray to Jesus."

CBN News Contributing Correspondent Chuck Holton is also in Iraq and Syria working on the humanitarian efforts. In addition to his reporting, he's posting updates to his Facebook page.

In a post on Tuesday, Holton wrote he had crossed the Iraq - Syrian border three times.

"An unbelievably crazy day. I crossed the Tigris between Iraq and Syria three times today. Once on a bus, once driving an ambulance and once on foot. After being told all three were prohibited. At one point we were ruck-marching away from the border into Syria with only half our team and no idea where we were going to sleep. But all's well that ends well. We are safe and have all our stuff. Watch the Hot Zone podcast to find out more. Thank you very much for every single one of your prayers," he wrote.

In one of his journeys across the Iraq-Syrian border, Holton wrote in another Facebook post about how he met Janda, a Syrian Kurd who works as a nurse in the area affected by Turkey's invasion. After offering to pray for her, he had the amazing opportunity to tell her about Jesus Christ.

"This is Janda, a Syrian Kurd. She works as a nurse in the area affected by Turkeys recent incursion. She told me most of the casualties they are seeing are civilians," Holton wrote.

"The children are the worst," Janda told him. "Why do we have to go through this after we finally got rid of ISIS?"

"I offered to pray for her and she gave a sober nod," Holton wrote. "When I finished praying in Jesus' name, she said, 'Perhaps Jesus will answer our prayers. Because Allah has not.' This opened the door for us to share more with her about the living Savior."

"Please pray for her, he asked. "And BTW, her name in Kurdish means 'Sacrifice.'"