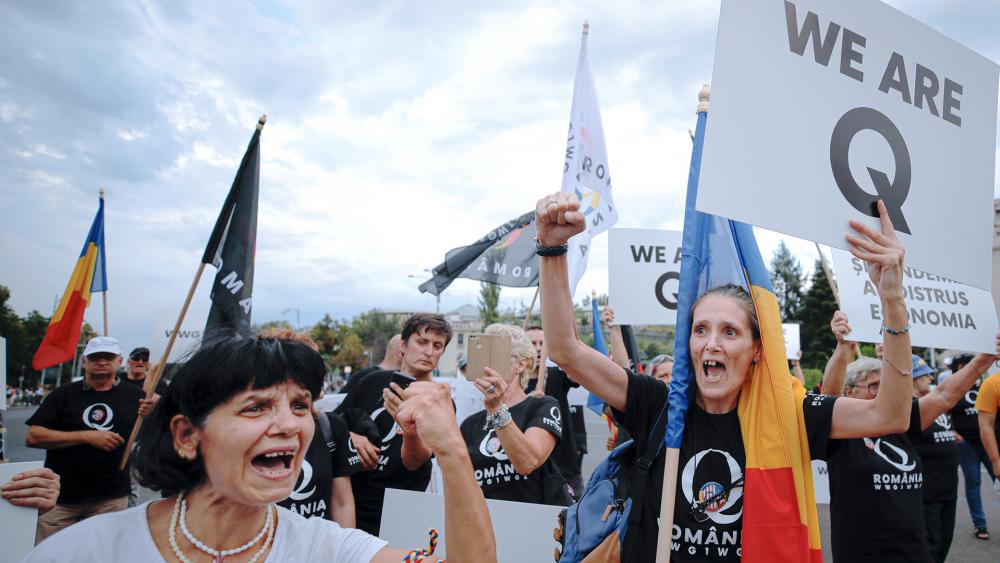 Supporters of QAnon shout slogans against the government's measures to prevent the spread of COVID-19 infections during a rally on Aug. 10 (AP Photo/Vadim Ghirda)

Christian leaders are speaking out against the conspiracy theory known as QAnon, proclaiming that the movement is trying to infiltrate the church with its disturbing beliefs.

QAnon began to build its foundation in 2017 with an online figure who claimed to have top-security clearance within the US government, according to the BBC.

The mysterious person posts cryptic messages on the board "4chan" and alleges to have direct involvement with secret political investigations.

Followers of the conspiracy theory believe that President Trump and military officials are working to expose a "deep state" pedophile ring with links to showbusiness, the media, and the Democratic Party.

Since its inception three years ago, the theory has drawn supporters who are searching for an explanation to connect recent, global events.

But church leaders say these conspiracy theories are gaining support within their congregations as some believers are turning to QAnon for the truth rather than the Bible.

Mark Fugitt, the senior pastor of Round Grove Baptist Church in Missouri, told Religion News Service (RNS) that the list of theories being shared is long and that it's still growing.

"You don't just see it once," said Fugitt. "If there's ever anything posted, you'll see it five to 10 times. It's escalating for sure."

Jon Thorngate, who is a pastor at LifeBridge in Wisconsin said church members shared a short film on Facebook called "Plandemic" that depicts COVID-19 as a tactic by government officials to make money.

Thorngate told RNS that the current fascination with conspiracy theories stems from a distrust in people of authority which can even lead them to discount the truth of the ultimate spiritual authority – Jesus Christ.

"That part for us is concerning, that nothing feels authoritative right now," Thorngate added.

And Pastor Jared Stacy of Spotswood Baptist Church in Virginia said the spreading of conspiracy theories within his church is affecting its younger members.

"My fear is that Jesus would not be co-opted by conspiracy theories in a way that leads the next generation to throw Jesus out with the bathwater," Stacy said, "that we're not able to separate the narrative of taking back our country from Jesus' kingdom narrative."

In an article he wrote for The Gospel Coalition, Carter said QAnon is a "political cult" and "satanic movement" that "poses a threat to the global church."

Dru Johnson, director of The Center for Hebraic Thought said the Bible talks about how Christians are supposed to address conspiracy theories.

"The biblical diagnosis, the biblical impulse here, is not that you have to be afraid of someone lying to you," said Johnson. "It's that somebody will always be interpreting your world for you. And you have to lean into the wise practices that God has given us as people to discern what is worth listening to and what's not."

Even the FBI believes that conspiracy theories, like QAnon, are a new domestic terrorism threat.

As church leaders continue to cope with the challenges of lecturing to their congregations online, now they are faced with the test of teaching members to avoid theories and seek truth in the Gospel.

"Conspiracy theories thrive on a sort of cynicism that says, 'We see a different reality that no one else sees'," said Pastor Stacy. "Paul says to take every thought captive - addressing conspiracy theories is part of that work."