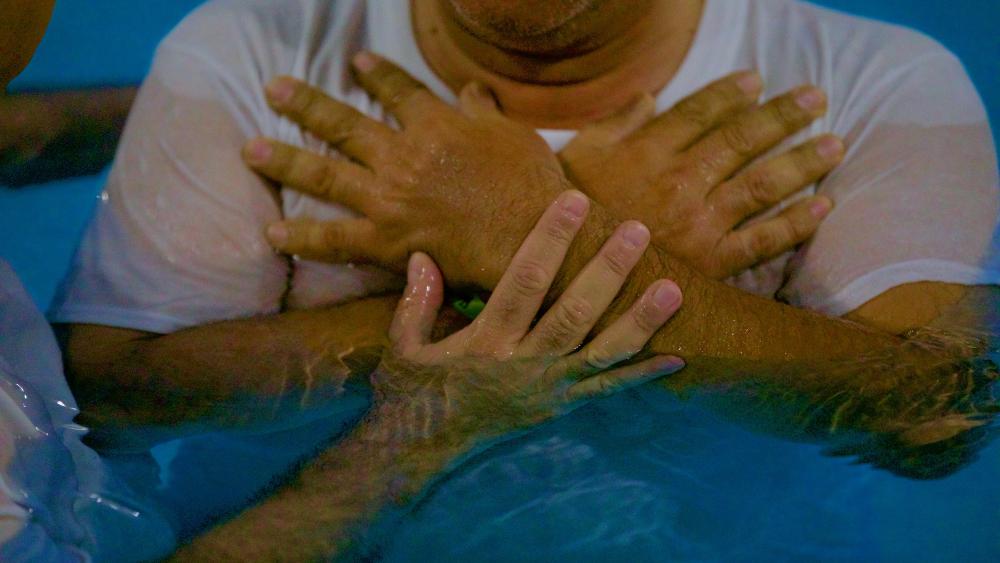 Iran is one of the world's most dangerous places for Christians. Yet this Muslim nation is seeing an unprecedented explosion of Christianity. Muslims fed up with Islam are becoming followers of Jesus Christ in record numbers. A group of converts secretly left Iran to be baptized.

On a recent Thursday afternoon, 20 Iranians took a flight from their country's main international airport in the capital city of Tehran and flew to an undisclosed city. The journey was filled with danger, but each one of them was willing to take the risk for the chance to experience a life-transforming moment.

For security reasons, we have concealed their identities, changed their names and their voices.

One-by-one 20 Iranians descended the steps of an indoor swimming pool.

Some were single. Others married and joined by their spouses. Moms and dads with children also were baptized.

In the water waiting to baptize them – fellow Iranians Amir and Sasan, who escaped persecution in their homeland.

"Most of the people at this gathering are artists, musicians, some are TV producers, they are very educated people, they are specialists from different fields of Iranian society," Pastor Amir told CBN News.

The Long Road to Baptism for Iranian Believers

27-year-old aspiring actor Reza was among those being submerged.

"I was waiting for this day for a long time," Reza said. My heart was beating so fast with excitement."

Reza had a difficult childhood. He told CBN News that today was an important part of his healing journey.

"I felt the presence and unconditional love of Christ that I was always thirsty for, and that moment when I was in the water, I just screamed and thanked God."

25-year-old Mariam was joined in the pool by her sister and brother.

"This is an amazing day for us," exclaimed Mariam. "It is really nice that we are all together as siblings."

Hamza was in the water minutes after the siblings. The former alcoholic and heroin addict gave his life to Christ while in rehab. He's been clean eight years.

"The pain and darkness in my past life are no more," Hamza told CBN News. "Those days of homelessness and loneliness are all behind me. When I closed my eyes, prayed, and went underwater, the light of God was more visible in my life than ever before. I always felt I wasn't a real Christian because I wasn't baptized. I now feel like a complete Christian."

Mohabat TV – The Path to Christ for Thousands of Iranians

All 20 Iranians were once Muslim. Many, like Leila, deciding to follow Jesus Christ after watching Mohabat TV, one of the most popular Christian satellite channels in Iran.

"I grew in my faith watching Mohabat TV," Leela said. "I didn't know any other Christian person. I would call the TV hotline and phone counselors would pray for me. This is how I grew in my faith."

Mike Ansari, an Iranian by birth, is director of operations at Mohabat TV.

"20 people who have joined us in their journey of faith from the beginning, watching Mohabat TV and then growing and then giving their hearts to Christ and then coming here and saying, 'I would like to be baptized, I would like to be sent out, give me more.' It is an anointed moment that words cannot describe," Ansari told CBN News from an undisclosed location in the Middle East.

Ansari says Christianity is growing fastest in his native land than in any other country of the world. More women are coming to Christ than men.

As a result, women are now in key leadership positions within Iran's underground church movement.

40-year-old Azar is one of them. She used to follow the laws and tenants of Islam to a "T."

"I was a very strong Muslim, a very devout follower from a young age. I prayed daily to Mohammed, I wore the full hijab, I didn't want any man to ever see my face. I never wanted to cause a man to sin by looking at my body," Azar said.

Still, Azar says 30 years of devotion to Islam left her restless. Like many women in Iranian society, she felt less valuable and on the edge of despair.

"I always questioned why Mohammed gave us a religion to follow that didn't allow us to be free and happy as women. There were so many restrictions on what we can and cannot do."

Then, 11 years ago, she watched a movie on the life of Christ and she was changed.

"I realized that I was following a lie, that Islam was a lie, and at times felt those 30 years I spent being Muslim were wasted. But Jesus said he would restore those lost years," said Azar.

She now runs a network of secret underground home fellowships.

"Because we don't have a church to gather in we have to keep our groups small, not more than five or six people. We constantly change days, times, and locations to avoid getting caught."

When he's not busy baptizing fellow-countrymen, Sasan is co-hosting a popular show on the channel showing Iranian Christians how to operate house churches and spread the gospel inside the Islamic country.

"It's one of the greatest resources we can offer the church inside Iran, a church that doesn't have any access to any educational institutions, any theological schools, any church buildings, established Christian institutions; So through these programs, we are mobilizing and resourcing the house church movement in Iran," Pastor Sasan told CBN News.

The kind of persecution taking place in Iran today has been going on for 2,000 years of Church history.  In the Fifth Century, St. Patrick endured persecution, imprisonment, and torture as he spread the gospel of Jesus Christ to Ireland. Now CBN Films is releasing a powerful new movie about his life. "I Am Patrick" hits theaters March 17 and 18 only. You can get your tickets HERE.

Mohabat also has a virtual church platform giving undercover Christians the opportunity to connect with others scattered around the country in a safe and secure environment.

"We are realizing that a lot of isolated believers in Iran, they do not have any chance to have fellowship with anybody else, so we are using the virtual church as a bridge," said Ansari, head of Mohabat TV.

Sheema is a Mohabat phone counselor. She says many recent callers to the channel expressed anger with Iran's government leaders.

"People blame the regime for all their problems because they know the country is wealthy, we have oil and other riches, but the government doesn't care about people's suffering and they are fed up," Sheema said.

The Iranians told CBN News how devastating the sanctions have been on their lives. More than a year after the Trump administration put crippling sanctions on the Islamic Republic, the nation is in deep recession, there is high inflation and the country has lost most of the value of its currency.

After a few days of Bible training, worship and prayer, the 20 Christians headed back home to Iran carrying with them Bibles, Christian literature, and hundreds of micro SD cards containing evangelistic material used to share hope and the love of Jesus Christ during these uncertain times.

They knew it was a risky mission – but worth it.

"Hopefully, when you see these images of people getting baptized and hear their testimonies, you are drawn to pray for Iran and the whole Islamic world, because they are lost and need Jesus," said Amir.

**This story was first published in February 2020.