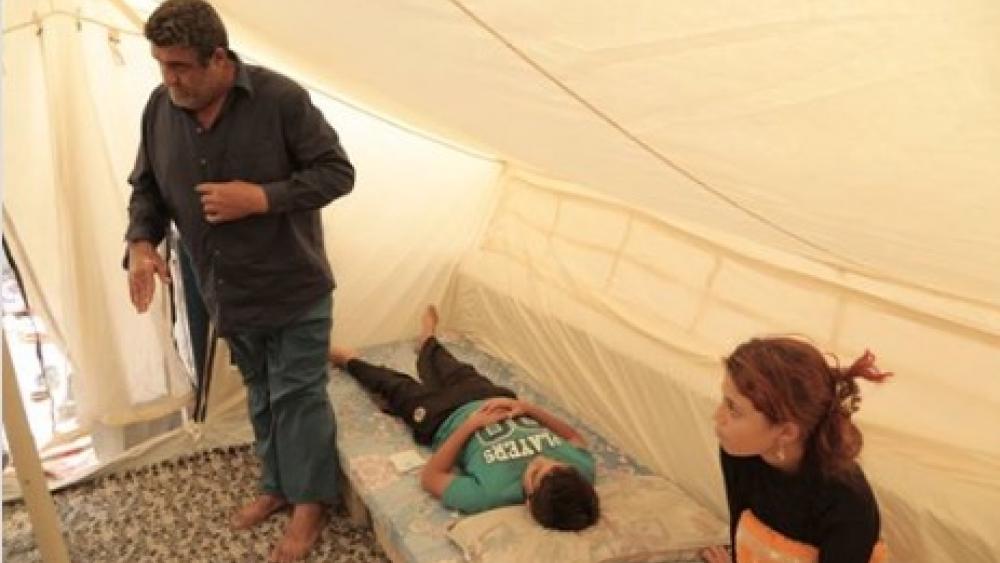 Image source: Faithwire
6120391106001
I Saw Qasem Soleimani's Brand of Evil Firsthand — It's Worse Than You Could Possibly Imagine

Just how evil was Tehran’s former top terror chief, Qasem Soleimani? While reporting in Iraq in 2015, I came face to face with his brand of terrorism and it’s been seared in my mind ever since.

How evil was Qassem Soleimani? While in Iraq in 2015, I met this family. The boy laying down had been tortured by Shia militias from Iran. They drilled holes in his legs, among other things too horrific to mention. pic.twitter.com/Zj6b95JArU

In 2015 I went to Iraq to report on the state of ISIS after one year had passed since they unleashed a murderous reign of violence against the Iraqi people.

I met the family in the above picture at an IDP camp outside of Erbil, Iraq. The father explained their desperate situation, homeless because of the latest ISIS reign of terror.

His body was severely burned, his son lay silent on the cot in the tent. When we asked about these things, he explained how Iranian Shia militias had killed his wife, tortured him and his children, including his young boy. The militias, who would have been under the control of Qasem Soleimani, proceeded to drill holes in the boy’s legs as a means to further threaten the father.

The boy stared silently at the ceiling, seemingly void of all emotion. Dad explained that he still has nightmares daily, and often soiled himself because of them.

Listening to the details of such horrific violence and seeing the results of it face to face was hard enough to go through. One can only imagine what it was like to actually live it.

Qasem Soleimani was in charge of about 15,000 in Iran’s Quds force, which is mainly responsible for “military” operations that take place out of the country.

According to an extended piece in The New Yorker back in 2013, Soleimani’s Quds Force was responsible for thousands of American casualties in Iraq (emphasis mine):

In 2004, the Quds Force began flooding Iraq with lethal roadside bombs that the Americans referred to as E.F.P.s, for “explosively formed projectiles.” The E.F.P.s, which fire a molten copper slug able to penetrate armor, began to wreak havoc on American troops, accounting for nearly twenty per cent of combat deaths. E.F.P.s could be made only by skilled technicians, and they were often triggered by sophisticated motion sensors. “There was zero question where they were coming from,” General Stanley McChrystal, who at the time was the head of the Joint Special Operations Command, told me. “We knew where all the factories were in Iran. The E.F.P.s killed hundreds of Americans.”

Suleimani’s campaign against the United States crossed the Sunni-Shiite divide, which he has always been willing to set aside for a larger purpose. Iraqi and Western officials told me that, early in the war, Suleimani encouraged the head of intelligence for the Assad regime to facilitate the movement of Sunni extremists through Syria to fight the Americans. In many cases, Al Qaeda was also allowed a degree of freedom in Iran as well. Crocker told me that in May, 2003, the Americans received intelligence that Al Qaeda fighters in Iran were preparing an attack on Western targets in Saudi Arabia. Crocker was alarmed. “They were there, under Iranian protection, planning operations,” he said. He flew to Geneva and passed a warning to the Iranians, but to no avail; militants bombed three residential compounds in Riyadh, killing thirty-five people, including nine Americans.

While it is perfectly understandable to be concerned about what happens next with Iran, it’s hard to look at it as anything but positive that Soleimani is no longer walking the face of this planet.

Soleimani’s Quds Force was a designated a terrorist organization by the United States and Canada, as he was in charge of committing acts of terror outside of Iran’s borders.