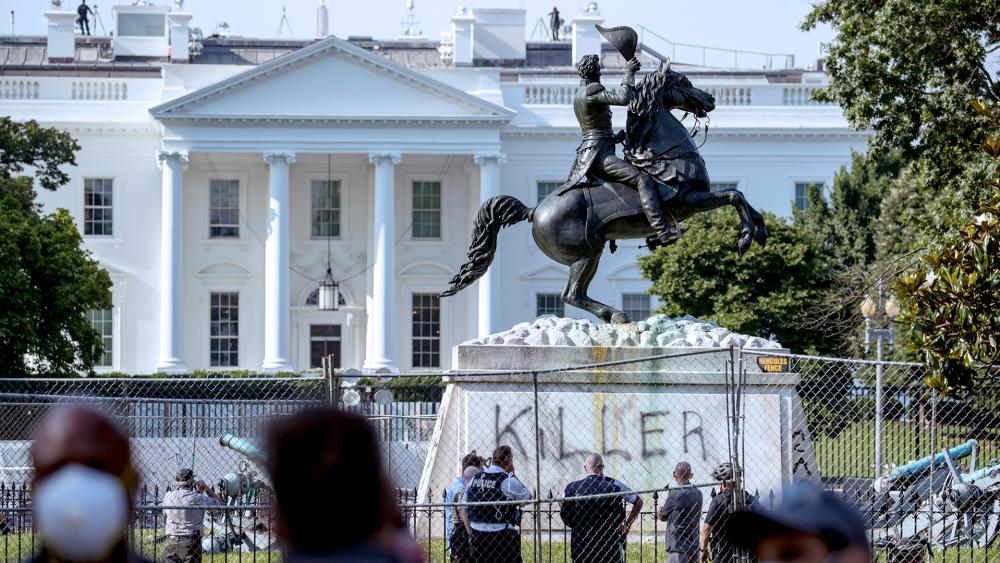 Protesters tried to topple a statue of President Andrew Jackson across from the White House, June 22, 2020, in Washington (AP Photo/Andrew Harnik)

A Venezuelan activist is warning Americans that the torching and toppling of historical statues could be a sign of what lies ahead - loss of our country to a devastating idea like socialism.

Activist Elizabeth Rogliani shared her warning online, pointing out that she experienced a similar situation as a teenager growing up in Venezuela.

"Why do I even worry about some silly statues coming down. Because the last time I didn't care about this I was a teenager," Rogliani said. "I have already lived through this thing when I was living in Venezuela. The statues came down...Chavez didn't want all that history displayed and then he changed the street names, then came the school curriculum. Some movies couldn't be shown on TV channels and so on and so forth."

Venezuelans recognize signs of a communist takeover better than almost anyone

(p.s. that accent is )pic.twitter.com/UJSjmfDXCo

Venezuela has been devastated by socialism, even though it was once a stable democracy and the richest country in Latin America.

"We didn't believe it could happen to us. Cubans warned us, yet it happened. And there's clearly a lot of people wanting to destroy the US."

During an interview on Fox News Channel's "The Ingraham Angle," the activist reportedly told host Laura Ingraham that all historical and religious symbols are in danger of defacement.

Rogliani noted that this destructive behavior toward some of the world's most significant figures – like statutes of George Washington, Christopher Columbus, and Abraham Lincoln – is an effort to destroy a national identity.

"It's an attempt to change the identity of the country. That's my opinion. And, that's what they did to us," she said. "Of course, it was different. At that point, they already had taken the government. But, at this point, they're trying to change the national identity and they're trying to destroy the system. And, if they get to the government, they'll do it. They certainly will do it."

In a tweet, President Trump indicated that he stands against oppression and supports the people of Venezuela.

"Unlike the radical left, I will ALWAYS stand against socialism and with the people of Venezuela. My Admin has always stood on the side of FREEDOM and LIBERTY and against the oppressive Maduro regime! I would only meet with Maduro to discuss one thing: a peaceful exit from power!"

Unlike the radical left, I will ALWAYS stand against socialism and with the people of Venezuela. My Admin has always stood on the side of FREEDOM and LIBERTY and against the oppressive Maduro regime! I would only meet with Maduro to discuss one thing: a peaceful exit from power!