Witnesses to the 'Uttermost Parts of the Earth:' Sharing the Gospel in Northern Siberia 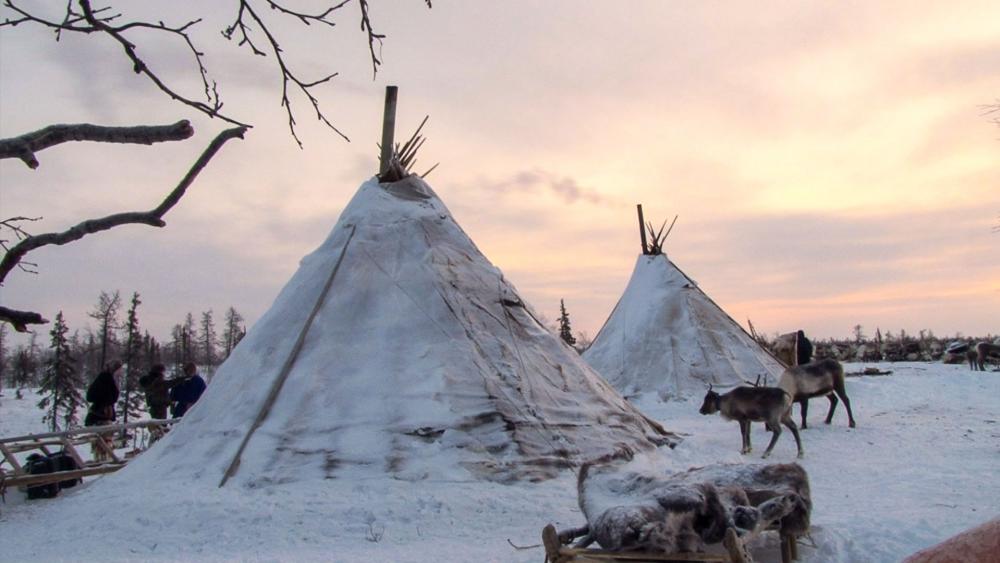 Witnesses to the 'Uttermost Parts of the Earth:' Sharing the Gospel in Northern Siberia

YAMAL PENINSULA, NORTHERN SIBERIA – The locals call this place "Yamal," which means "the end of the world." And in many ways, it is. There are no roads here. People use frozen lakes and rivers to get around on reindeer or snowmobile.

The temperature here fluctuates between -30 and -60 degrees Fahrenheit. As I prepare to venture outside, I put on layers and layers of clothing.

It's a little after 6:00 a.m. Peter Khundi, our Siberian guide, does last-minute checks on a snowmobile that has a sleigh attached. The sleigh is covered with reindeer skins. This is how we are going to travel into the tundra.

The Dangerous Trek Across the Siberian Tundra

"I have to make sure we have enough rope and other emergency supplies in case we get stuck," Peter says.

I ask him if this is dangerous. "Yes, it is," he replies.

Our destination this morning is a four-hour journey deep into the wilderness to meet a nomadic family. Two hours into our journey, we stop briefly. It's about 9:25 in the morning, and the sun has yet to rise.

The sun shines only a few hours during the winter. When it does appear, normally around Noon, the sunrise is something to behold.

"This is a special place," Peter says.

Sharing the Gospel with One Family at a Time

Peter belongs to the largest nomadic tribe in Northern Siberia. It's called the Nenets. He's more than just a guide. He's a Christian. And for the last few years, he's been sharing the Gospel of Jesus Christ with his tribe and others who live here in the tundra.

The Lifeblood of The Nenets – Reindeer

The Nenets are nomadic reindeer herders. The word "Nenet" means "child of a deer."

Reindeer are the lifeblood of the Nenets people here on the Siberian tundra because their meat and their hides fetch a lot of money in the villages.

"Our food, clothes, shoes, homes, our transportation – everything comes from them," says a Nenets herdsman. "Without deer, we cannot not survive."

And learning how to survive in the tundra begins at an early age. "All my children were taught from a young age how to live in [these] harsh conditions. It is our way of life, but if you are not careful you can die out here," says Ustinia Laptander of the Nenets Tribe.

The women take care of cooking, sewing clothes, and putting up the teepees. The men are hunters and care for the reindeer.

When it comes to skinning the reindeer, the entire family is involved. The hide is used to make the teepees and clothes.

Blood and raw reindeer meat are often consumed for their vitamin content. "We use every part of the animal. Nothing is wasted," says a nomadic man.

In the Fifth Century, St. Patrick endured persecution, imprisonment, and torture as he brought the gospel of Jesus Christ to Ireland. Now CBN Films is releasing a powerful new movie about his life. "I Am Patrick" hits theaters March 17 and 18 only. You can get your tickets HERE.

The Key to Evangelism in the Tundra: Friendship First

Peter is among a handful of evangelists reaching the Nenets people. He's been visiting Ustinia's family for a few weeks now.

"He comes here to tell us about God," Ustinia says. "We have good conversations."

He's supported by a local Siberian church and Russian Ministries, an organization focusing on spreading the Gospel in the former Soviet Union.

"I've brought presents for all the children today. Each box is filled with toys, school supplies, and a children's Bible. We have to build relationships first," says Peter.

Modern technology such as snowmobiles, cell phones, and generators have made life a little easier on the tundra.

"Before I had to rely on reindeer to get around. Now the snowmobile allows me to travel further distances to meet families," Peter tells me.

There are no verifiable numbers, but Peter estimates some 500 Nenets people have accepted the Lord in recent years.

"There are still thousands more who have yet to hear about Jesus," he says.

So, for now, Peter continues to traverse the harsh landscape of the Siberian tundra in search of more people with whom to share the Good News of faith in Jesus.

This story was orignally published on March 2, 2020.