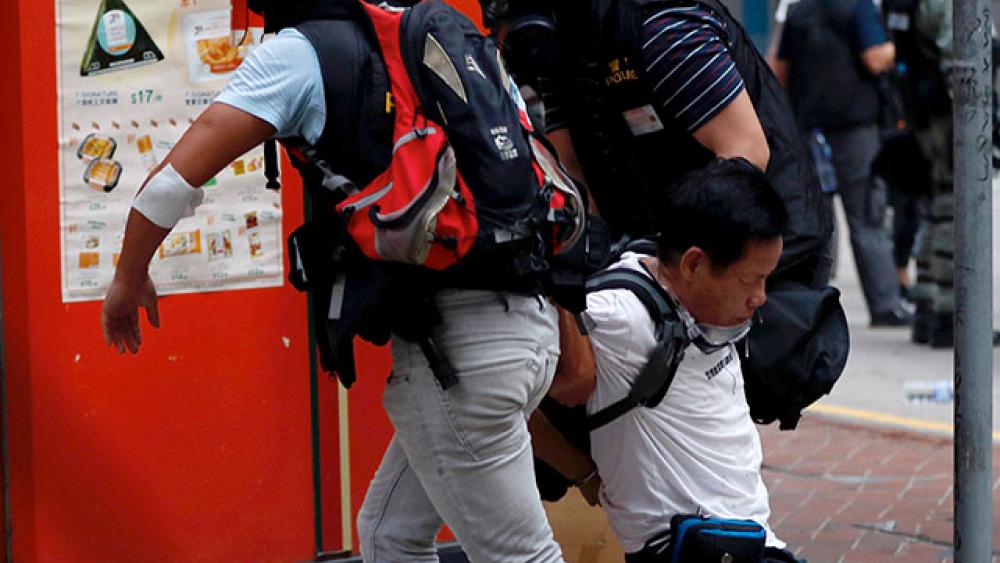 An injured anti-government protester is aided by others during a clash with police in Hong Kong, Oct. 1, 2019. Thousands of black-clad protesters marched as part of multiple pro-democracy rallies. (AP photo)
6159682351001
China Tightens Grip on Hong Kong, Residents Fear Loss of Liberties: 'A Deadly Blow to the Rights of People'

President Trump is vowing to take action against China over its latest move to tighten its grip on Hong Kong. The communist government is imposing new security laws severely curtailing human rights and other personal freedoms of residents in Hong Kong.

On Thursday, China's legislature overwhelmingly backed a resolution to draft new security laws tightening control over Hong Kong. The new laws would give Beijing much broader powers over the territory and allow Chinese state security agents to operate there.

Many say it spells the end of self-rule for Hong Kong.

Secretary of State Mike Pompeo announced Wednesday that Washington will no longer treat Hong Kong as autonomous from China. Lawmakers in Congress are proposing a bill sanctioning Chinese officials involved in enforcing the law.

President Trump was asked this week if he would levy sanctions on China if Beijing moved against Hong Kong. "We're doing something now. I think you'll find it very interesting. But I won't be talking about it today," the president said. "It's something you're going to be hearing about... before the end of the week - very powerfully I think."

When the city was handed to the Chinese back in 1997, the idea was that Hong Kong would be under this 'one country, two systems' agreement for at least half a century. Now, it looks like China isn't willing to wait.

"I don't think people are optimistic," said Yaqiu Wang, a China researcher for Human Rights Watch. "The national security law is dealing a deadly blow to the rights of people in Hong Kong."

As Beijing announced days ago, plans to enforce sweeping new security laws, similar to the draconian measures used on the mainland, many feared it would be the end of Hong Kong as we know it.

"Beijing has essentially intervened directly and said we are not going to wait, we are going to pass this law here in Beijing which will apply to you Hong Kong," Dean Cheng with The Heritage Foundation told CBN News. "Effectively, this is saying Hong Kong is no longer under a 'one country, two systems' approach, it is now fully integrated into China, despite the fact that we are not yet at 2047."

Many Hong Kong residents are fearful at the thought of becoming another Chinese city and losing personal freedoms.

"I think it's very ridiculous. They promised 'One Country, Two Systems,' but the content of the security law is basically implementing 'One Country, One System'," said Tiffany Chung, a resident of the city.

After months of pro-democracy protests, experts see this move by China as a way to take greater security control of Hong Kong.

"I don't think people are expecting that because the past year has proven that, absolutely that Beijing is not backing down because of protest, because of pressure," said Wang.

Cheng says for China, the idea of 'one country, two systems' has always really meant one country over two systems.

"What this is going to mean is that freedom of the press, freedom of expression, freedom of assembly, freedom of protest, freedom of speech, all of these are much going to be in jeopardy and it also, in effect, nullifies the independence of the Hong Kong judicial system," Cheng said.

China insists the new crackdown is needed to prevent secessionist and subversive activity, as well as foreign interference and terrorism.

Ahead of more pro-democracy protests this week, China's top military commander in Hong Kong says his 10,000-strong army is ready to do whatever it takes.

"The garrison troops have the determination, confidence and capabilities to defend national sovereignty, security and development interests and safeguard long-term prosperity and stability in Hong Kong," Chen Daoxiang, a Chinese Army Commander in Hong Kong, told reporters this week.

In Washington, lawmakers on both sides of the aisle, want to sanction any Chinese official involved in enforcing the new laws in Hong Kong. The bill would also penalize banks and businesses that help enforce the law.

The White House is warning China against enacting the laws.

"If that happens there will be sanctions that will be imposed on Hong Kong and China. It is hard to see how Hong Kong can remain the Asian financial center that it has become if China takes over," warned White House National Security Advisor Robert O'Brien.

And now experts worry that if China moves to take over Hong Kong, Taiwan could be next on Beijing's list.

"The reality is that China cracking down on Hong Kong means that Taiwan has even less reason to believe Chinese promises of autonomy and non-interference should the two reunify," warned Cheng.