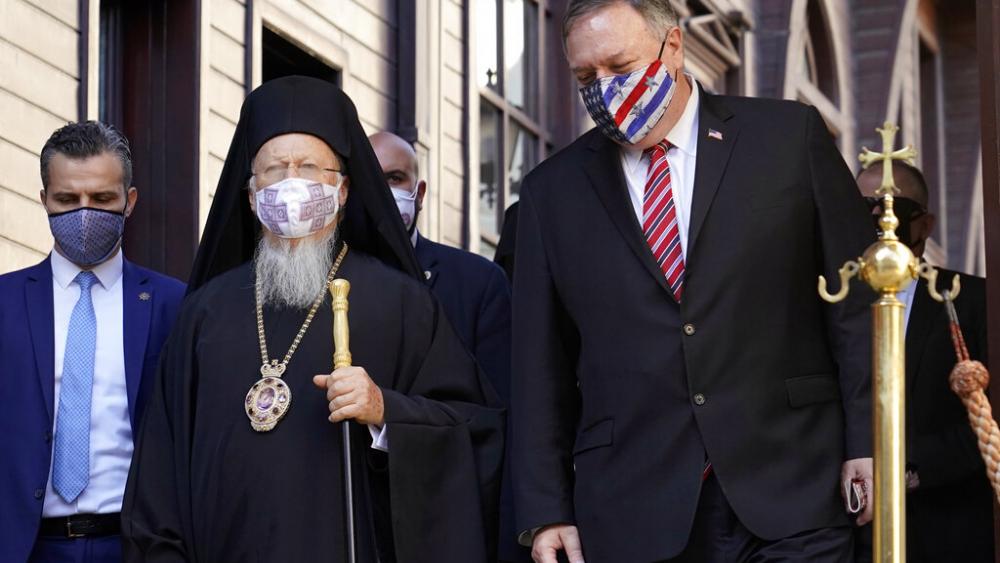 US Secretary of State Mike Pompeo is drawing attention to the lack of religious freedom in Turkey.

Pompeo visited Istanbul on Tuesday where his schedule included meetings with religious leaders but not government officials.

Pompeo's stop in Turkey focused on promoting religious freedom and fighting religious persecution, which is a key priority for the US administration, officials said.

Pompeo discussed religious issues with the Ecumenical Patriarch of Constantinople Bartholomew I, considered the spiritual leader of the world's Greek Orthodox Christians, and with the apostolic nuncio to Turkey, Archbishop Paul Russell.

Senior State Department officials said the lack of official meetings in Turkey was due to scheduling issues during the brief stop. They said meetings had been sought but Turkish officials were unable to come to Istanbul from the capital of Ankara during the time Pompeo would be there.

The officials noted that Pompeo and his Turkish counterpart plan to see each other in early December at a meeting of NATO foreign ministers.

"It would be more advisable for the United States to look in the mirror first and to show the necessary sensitivity to human rights violations such as racism, Islamophobia and hate crimes in its own country," the Turkish ministry said in a statement released before Pompeo's visit.

Back in July, Turkish President Recep Tayyip Erdogan converted Istanbul's landmark Haghia Sophia into a mosque, ignoring calls for the former cathedral to be kept as a museum in recognition of the city's multicultural past. The move led to accusations that the Turkish leader was trying to erase Orthodox Christians' cultural heritage.

The structure, a United Nations world heritage site, served as one of Christendom's most important cathedrals before being turned into a mosque with the Ottoman conquest of Constantinople and then into a museum 86 years ago.

Erdogan later also announced a decision to transform the Church of the Holy Saviour in Chora, another Byzantine-era church in Istanbul, into a mosque as well.

Turkey is also under pressure to reopen a Greek Orthodox theological school that was shut down in 1971.