Leader of Church Destroyed in Fire Forgives Arsonists: 'Today May Be a Day of Mourning, Tomorrow Will Be a Day of Joy' 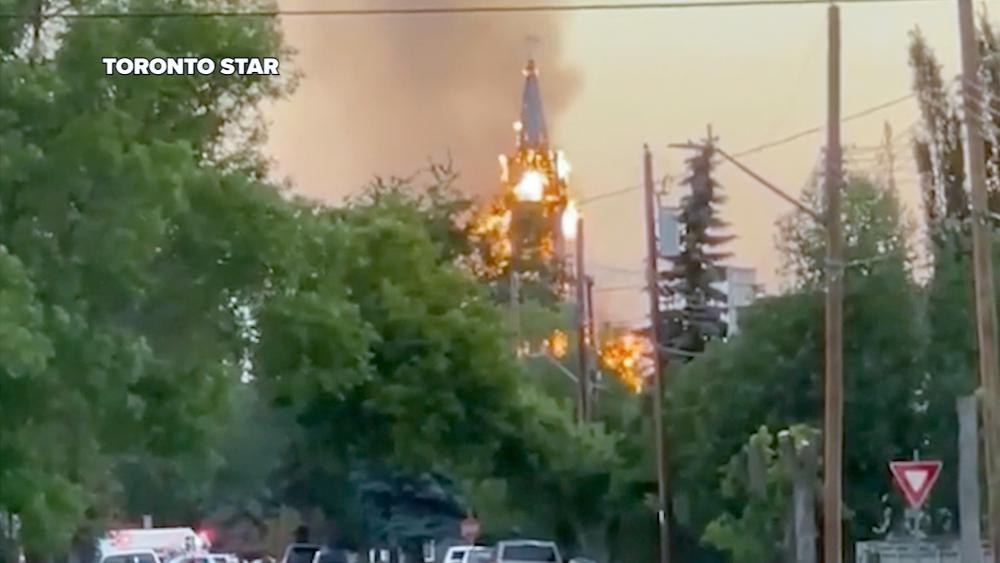 6266401358001
Leader of Canadian Church Destroyed in Fire Forgives Arsonists: 'Although Today May Be a Day of Mourning, Tomorrow Will Be a Day of Joy'

Just after 3:30 a.m. on July 19, 2021, in the Canadian city of Surrey, British Columbia, Steven Faltas awakens after calls from an alarm company and fire department about an incident unfolding at his church.

"When I got to our church it was a very difficult scene," Faltas recounted to CBN News.

Faltas is a board member at the church.

"The street was completely closed and there were approximately four or five fire trucks all fighting the blaze," Faltas remembered. "The scene was quite traumatic, surreal to be honest."

It's the latest in a string of arson or vandalism against churches across Canada.

"They hit 43 churches and 10 were hit in a single day in Calgary," Ezra Levant, a Canadian media personality and founder of Rebel News, told CBN News. "10 churches, one city one day. That's shocking."

Those 10 incidents happening in Alberta province where an officer with the Royal Canadian Mounted Police said they have deemed the acts suspicious.

"We are actively looking for suspects so that we can hopefully hold those who committed the acts accountable for the damage and the turmoil that they have caused," Tammy Keibel, a spokesperson with the Royal Canadian Mounted Police, said.

Calgary Police have released photos of several suspects wanted in their investigation.

"When a faith community is targeted for vandalism or arson it not only impacts those directly affected but leaves others in the same faith feeling unsafe," said Kurt Jacobs with the Calgary Police Service.

The arson and vandalism follow revelations that there are hundreds of unmarked graves at former boarding schools for indigenous children, many of which were Catholic-run.

After the discovery, churches began to burn across the country. And although most churches attacked have been Catholic, several non-Catholic congregations also suffered damage.

"It's tragic that churches are being caught in the crossfire of a historically long and difficult process, a political process, that we as an Orthodox community hasn't been involved with," Faltas said.

While Canada's Prime Minister Justin Trudeau has called the burning of churches an 'unacceptable' response to the unmarked indigenous graves, conservative talk show host Ezra Levant says any comments from Canadian national leaders to the church attacks has been tepid at best.

"You've got churches under attack all around and, frankly, no one willing to stand up for them because that's not politically correct," Levant said. "If these were mosques or synagogues, they'd have a hundred champions, but Christians I'm afraid are the last acceptable group in Canada to discriminate against even with violence and arson."

Levant says the other side, however, has been brutal at times.

For example, the recent tweet 'Burn it all down' led to the resignation of Harsha Walia, leader of British Columbia's Civil Liberties Association.

"This activist seems to be saying that if you are a Christian, you deserved to be burned and scared and picked on by virtue of your Christianity," Levant said.

"In the province of Alberta, three different pastors were jailed for refusing to close their church. Churches were demonized as super spreaders, they were scapegoated for the pandemic," Levant said. "It was reminiscent of language used against the Jews in Germany 80 odd years ago that they are diseased carriers, they are infecting society."

Members of Saint George's recently held a vigil outside their burnt church vowing to rebuild.

Faltas has a message for whoever destroyed their beloved place of worship.

"The only thing that we can say to those perpetrators is that as Christian believers we forgive you," Faltas said. "We obviously would love to have our church still standing but at the same time, we are strong believers, and although today may be a day of mourning, God will provide, and tomorrow will be a day of joy."