'Many Are Surrendering to Jesus': Migrants Flood to This Mexican Border Church, and That's Where They Meet Christ 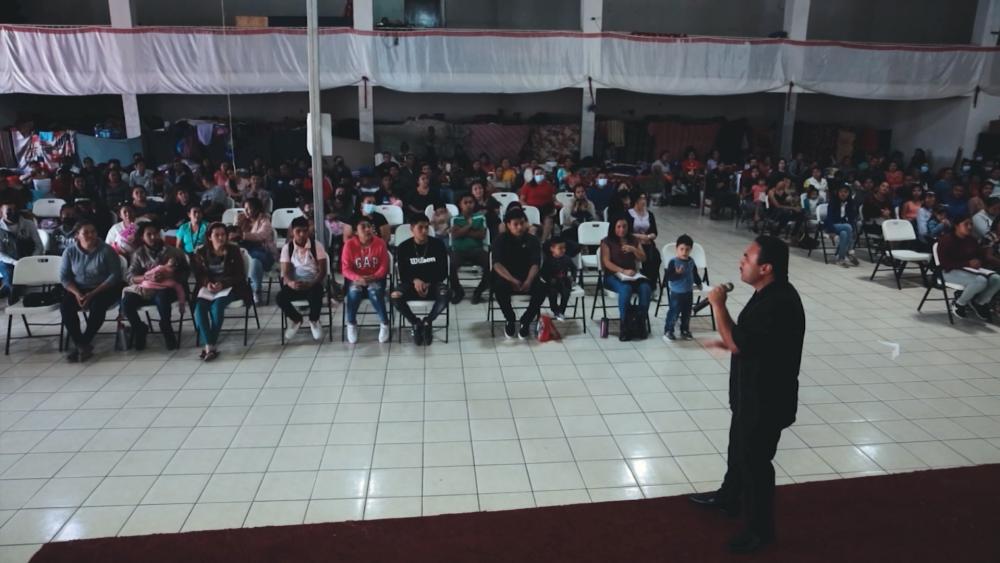 6287795827001
'Many Are Surrendering to Jesus': Migrants Flood to This Mexican Border Church, and That's Where They Meet Christ

SCORPION'S CANYON, Tijuana, Mexico –  When Gustavo Banda opened his small church in Mexico, little did he know that it would become a refuge. Sitting near the border, tens of thousands of migrants stop there as part of their search for freedom in America.

Six miles west of Tijuana, and a short distance from the U.S.- Mexico border, lies one of this city's poorest neighborhoods.

Pastor Gustavo Banda of the Ambassadors of Jesus Church told CBN News, "This area is on the outskirts of the city. Not everyone knows about it. Not everybody wants to come here either."

It's easy to see why. There are no paved roads. The hillside is strewn with garbage. There's no sewage system here. And crime is rampant.

"When we moved here there were only cows, horses, chickens, and people with a lot of needs," Banda said.

In 2011, Banda and his wife, Zaida Guillén, moved to Cañón de Alacrán, or Scorpion's Canyon, after hearing from the Lord in a dream. "It was a clear mandate from God to move here even though there was absolutely nothing in this place," he recalled.

Teachers by trade, the Mexican couple was touched by the overwhelming needs of the community. Most folks here were poor subsistence farmers.

"God gave me a dream that I had to build a church. We worked for eight months, day and night. We knew God was going to do something special, but nobody had a clue about what was really going to happen," he explained.

That year, Templo Embajadores de Jesús, or Ambassadors of Jesus Church, was born in the heart of Scorpion's Canyon.

Banda held services on Sunday, then hit the rugged roads the rest of the week going house-to-house, ministering to physical and spiritual needs.

"We shared the love of Jesus with them. It was the mandate from God that we have to go to the poor," he said.

In 2016, that focus drastically changed when thousands of Haitians, escaping poverty and back-to-back natural disasters, began to carve a dangerous 7,000-mile path to the U.S-Mexico border.

Many landed on the church's doorsteps, less than 30 minutes from the San Ysidro border. "Within months, 22,000 Haitians had arrived in the city of Tijuana," he recalled.

The church became a place of refuge. "I did not know, nor did I ever image, that there would be so many people in the church," he said.

Since then, Banda has opened his church doors to migrants from all parts of the world.

"It started with migrants coming from Haiti, Africa, Pakistan, and the Middle East. Today, we mainly have people from El Salvador, Guatemala, Ecuador, Nicaragua, Colombia, and some from Mexico," he said. "It's hard to tell, but we estimate about 35,000 people have come through the church, easily."

On the day CBN News visited, 1,200 were staying in the church.

"We feed them 3 times a day. We try to help them with all their needs," he said. "At nighttime, the entire church becomes one big giant dorm where everyone sets up their beds on the floor, and sometimes there's no room to even walk on the floor."

Redin Castillo from Honduras has been here for four months. He says gangs killed his father and threatened to take his life as well. He said, "Thank God that I'm not in danger anymore. They are not sending me the threatening messages like they used to."

Jaqueline Ortiz, 24, from Guatemala is here with her two girls. She said, "I'm so thankful to God because if these doors of the church weren't open, I don't know where I would be. I don't go hungry here, my daughters don't go hungry, we have a warm place, we have a roof, and all thanks to God and to the people that help us."

Most migrants stay here an average of six months before trying to legally cross the border.

Church volunteers run a school for the children, oversee computer training and provide other skills that will help migrants prepare for their new life in America.

Area churches and NGOs also pitch in with food and other essential supplies.

"The most important thing for the migrants to know when they get here is that there is hope and although they have left their families behind, all of us that are here, have become their family," he said.

Come Sunday, everyone picks up their bed and dresses up for a lively church service.

"I know that I have only a little bit of time with them so my job is for them to know as much as they can about Jesus, baptize them, and send them to the United States believing in Jesus!" he explained.

Pastor Gustavo started the church back in 2011 with no idea that he'd be housing thousands of migrants from around the world. So today, 10 years later, a new structure is going up which will be the future home for the migrants.

He once had a desire to be a missionary to Haiti. Not anymore.

"I even started learning a little bit of their language, but when I wanted to go to Haiti, Haiti came to me. And after Haiti came, all the other nations started coming to this place," Banda said. "I don't have the numbers, but for years we have been baptizing so many of them and many more are surrendering to Jesus and that's my calling now." 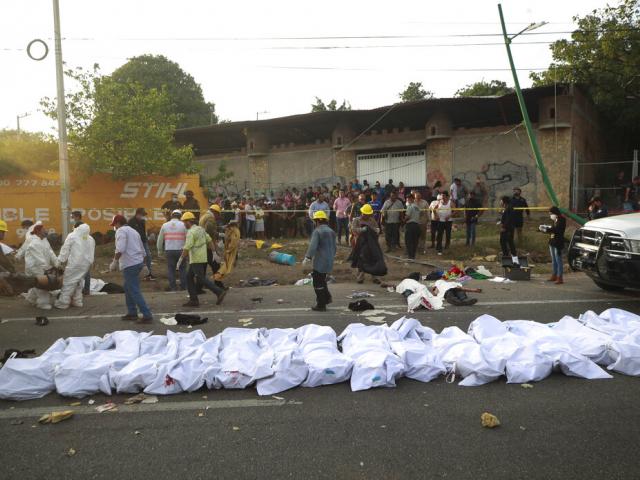 53 Die In Horror Crash Of Truck Smuggling Migrants In Mexico 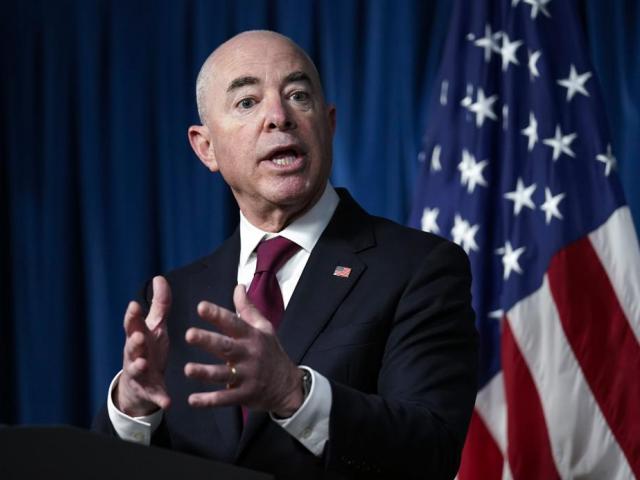 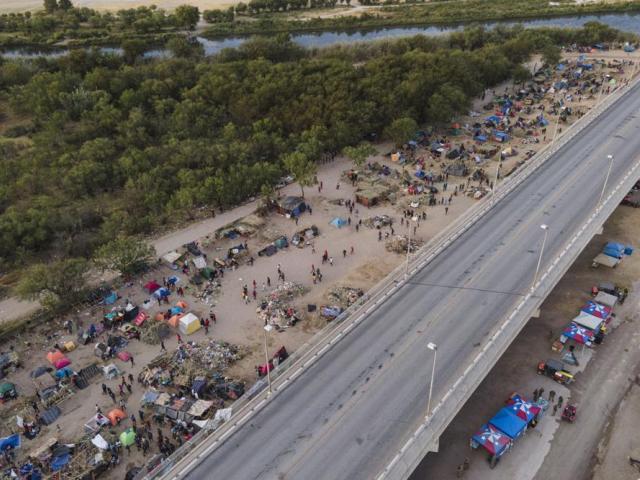 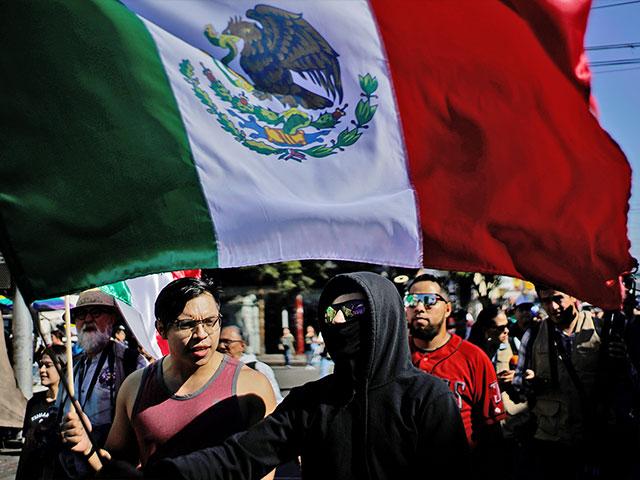