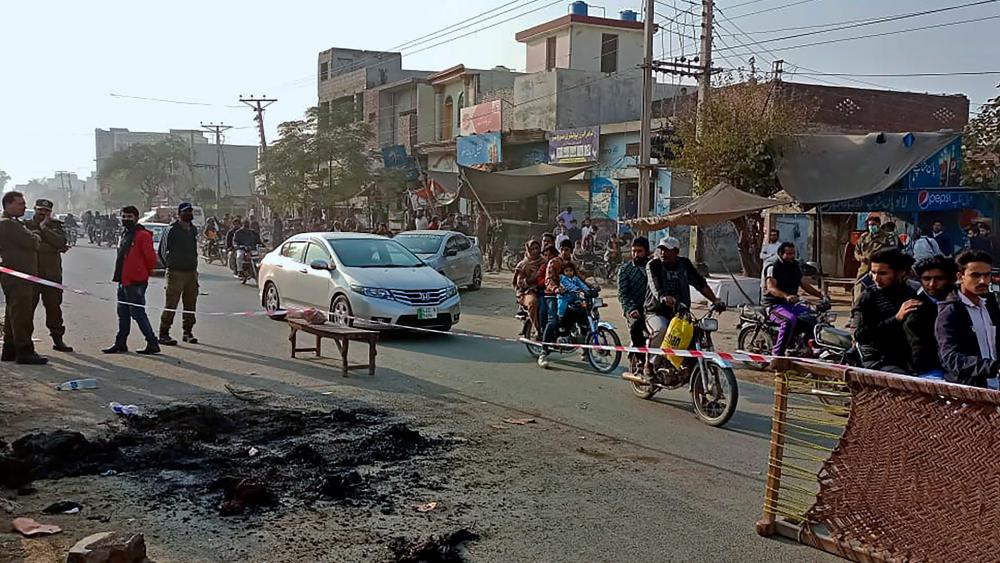 Police officers stand guard near the site where a Sri Lankan citizen was lynched by Muslim mob outside a factory in Sialkot, Pakistan, Friday, Dec. 3, 2021. (AP Photo/Shahid Akram

The general manager of a sports equipment factory in Pakistan's Sialkot district was lynched and his body burned on a public street by a mob of Islamists on Friday. His crime? He allegedly tossed a poster containing Quranic verses into a trash can.

Priyantha Kumara, a Sri Lankan national in his mid-40s, was seized by an angry mob of supporters of Tehreek-e-Labbaik Pakistan (TLP), a hardline Islamist party, after he removed one of the TLP's posters from a wall near his office in the factory.

A couple of the factory's employees allegedly saw him remove the poster and they spread the word throughout the facility, accusing the victim of desecrating posters bearing the name of Islam's Prophet Muhammad.

Hundreds of Muslims enraged over the "blasphemy" incident gathered outside of the factory and were involved in Kumara's murder, according to law enforcement officials.

Punjab police chief Rao Sardar said Saturday that investigators arrested prominent suspects after seeing their clear role on video in instigating workers to violence, killing the manager inside the factory and dragging his body outside, and taking selfies with his burning body and proudly admitting what they did.

Punjab police chief Rao Sardar said investigators were examining footage from some 160 closed-circuit television cameras to ascertain the role of potential suspects and 10 teams were conducting raids to net even more suspects.

The lynching was widely condemned by Pakistan's military and political leadership, prominent social and religious figures, and civil society members.

In a tweet, Pakistan's Prime Minister Imran Khan condemned the murder, calling it a "day for shame in Pakistan."

"The horrific vigilante attack on factory in Sialkot & the burning alive of Sri Lankan manager is a day of shame for Pakistan. I am overseeing the investigations & let there be no mistake all those responsible will be punished with full severity of the law. Arrests are in progress," he wrote.

The horrific vigilante attack on factory in Sialkot & the burning alive of Sri Lankan manager is a day of shame for Pakistan. I am overseeing the investigations & let there be no mistake all those responsible will be punished with full severity of the law. Arrests are in progress

Maulana Tariq Jameel, a well-known cleric in Pakistan, said that taking the law into one's own hands on the basis of a mere accusation was against the teachings of Islam, according to Dawn.com.

"There is no room for violence and extremism in Islam," he wrote in a tweet, calling on religious scholars to play a positive role in preventing extremism in the country.

"Sri Lanka expects that the Pakistan authorities will take required action to investigate and ensure justice," he said.

Amnesty International said in a statement it was "deeply alarmed by the disturbing lynching and killing of a Sri Lankan factory manager in Sialkot, allegedly due to a blasphemy accusation." The watchdog also demanded an investigation and punishment for the attackers.

Friday's attack comes less than a week after a Muslim mob burned a police station and four police posts in northwestern Pakistan after officers refused to hand over a mentally unstable man accused of desecrating Islam's holy book, the Quran. No officers were hurt in the attacks in Charsadda, a district in Khyber Pakhtunkhwa province.

Pakistan's government has long been under pressure to change the country's blasphemy laws, something the Islamists in the country strongly resist.

As CBN News has reported, in Pakistan, false accusations of blasphemy are common and often motivated by personal vendettas or religious hatred against minorities. Blasphemy accusations are highly inflammatory and have the potential to spark Muslim mob lynchings, vigilante murders, and mass protests.

Currently, at least 24 Christians are imprisoned on blasphemy charges in Pakistan.

The United States Commission on International Religious Freedom (USCIRF) released a report titled Violating Rights: Enforcing the World's Blasphemy Laws. The report examines the enforcement of blasphemy laws worldwide over a four-year period. Those laws criminalize expressions that insult or offend religious doctrines, according to the USCIRF.