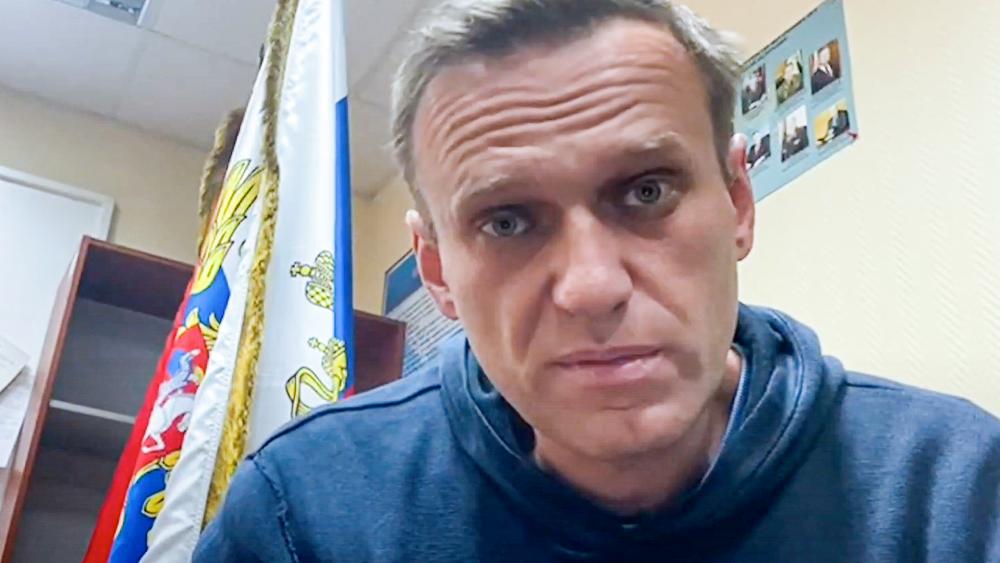 MOSCOW (AP) - A Russian judge on Monday ordered opposition leader Alexei Navalny jailed for 30 days, a ruling that comes after the leading Kremlin critic returned to Russia from Germany where he was recovering from nerve agent poisoning that he blames on President Vladimir Putin's government.

The ruling concluded an hours-long court hearing at a police precinct where Navalny was being held since his arrest at a Moscow airport on Sunday evening sparked sharp reactions, both at home and around the world.

A crowd of Navalny supporters outside the precinct shouted “Shame!” as the judge announced the ruling and Navalny's allies immediately called for protests. His arrest had already prompted a wave of criticism from U.S. and European officials, adding to existing tensions between Russia and the West.

His top strategist, Leonid Volkov, announced preparations for “large rallies" on Saturday “all across the country.”

“Don't be afraid, take to the streets,” Navalny said in a video statement released after the ruling was announced. “Don't come out for me, come out for yourselves and your future.”

The 44-year-old Navalny, Putin’s most well-known critic, campaigned to challenge him in the 2018 presidential election but was barred from running. He has issued scores of damning reports over the years about corruption in Russia under Putin’s regime. After recuperating for months in Berlin after his Aug. 20 poisoning, he returned to Russia on Sunday evening despite warnings that he would be immediately arrested.

As expected, Navalny was detained at passport control at Moscow's Sheremetyevo Airport after the plane was diverted from landing at another Moscow airport in what was seen as an attempt to foil supporters who had gathered to cheer the arrival of their hero. Russia’s prison service said he had violated probation terms from a suspended sentence on a 2014 money-laundering conviction, which he says is contrived and politically motivated. The service said it would seek to have Navalny serve his 3½-year sentence behind bars.

His allies dismissed the move as an attempt by the Kremlin to keep him from coming back to Russia to continue his political activities.

A court hearing on the prison service’s motion to have Navalny serve his suspended sentence in prison is scheduled for Feb. 2, according to his lawyers.

German government spokesman Steffen Seibert noted that "the Russian authorities have arrested the victim of an attempted assassination with a chemical weapon, not the perpetrator” and called for Navalny's release.

Russian Foreign Minister Sergey Lavrov said Monday that the stream of Western reactions to Navalny’s arrest reflected an attempt “to divert attention from the crisis of the Western model of development.”

“Navalny’s case has received a foreign policy dimension artificially and without any foundation,” Lavrov said, arguing that the detention was a prerogative of Russian law enforcement agencies. “It’s a matter of observing the law.”

Navalny spent the night at the police precinct outside Moscow. In a highly unusual development, the court hearing on Monday was held right at the precinct, and his lawyers said they were notified only minutes before.

“It is impossible, what is happening over here,” Navalny said in a video from the improvised courtroom that was posted on his page in the messaging app Telegram. “It is lawlessness of the highest degree.”

The judge ordered that Navalny be remanded in custody until Feb. 15, his spokeswoman, Kira Yarmysh, said on Twitter. Navalny’s lawyer, Vadim Kobzev, told the Interfax news agency that the defense plans to appeal the ruling.

Navalny fell into a coma while aboard a domestic flight from Siberia to Moscow on Aug. 20. He was transferred from a hospital in Siberia to a Berlin hospital two days later. Labs in Germany, France and Sweden, and tests by the Organization for the Prohibition of Chemical Weapons, established that he was exposed to a Soviet-era Novichok nerve agent.

Russian authorities, however, insisted that the doctors who treated Navalny in Siberia before he was airlifted to Germany found no traces of poison. Russia refused to open a full-fledged criminal inquiry, citing a lack of evidence that Navalny was poisoned, and Russian officials have challenged Germany to provide proof of the poisoning.

Last month, Navalny released the recording of a phone call he said he made to a man he alleged was a member of a group of officers of Russia's Federal Security Service, or FSB, who purportedly poisoned him in August and then tried to cover it up. The FSB has dismissed the recording as fake.

Navalny has been a thorn in the Kremlin’s side for a decade, unusually durable in an opposition movement often demoralized by repression. Russian authorities have launched multiple criminal investigations against him, and he has been tried and convicted in two separate criminal cases widely seen as politically motivated.

In December 2014, Navalny was convicted on charges of fraud and money-laundering and received a 3½-year suspended sentence, which he denounced as politically motivated and which the European Court of Human Rights found “arbitrary and manifestly unreasonable.”

The sentence carried a probation period that was to expire in December 2020. Authorities said the politician was subject to regular in-person checks with law enforcement officers as a condition of his probation. In December, days before his probation period was supposed to end, Russia’s prison service accused Navalny of not appearing for these checks, including when he was convalescing in Germany.

Navalny has repeatedly vowed to return to Russia despite the threats of arrest.

As he bordered a plane bound for Moscow on Sunday, he brushed off concerns about being detained again in Russia, saying: “It's impossible. I'm an innocent man.”