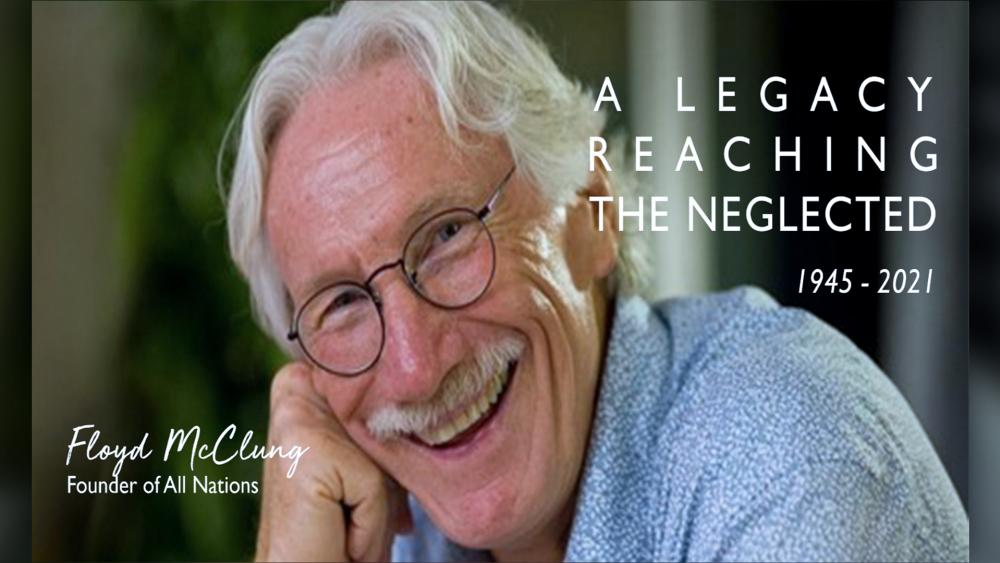 McClung had battled a rare bacterial infection since 2016, which left him hospitalized and unable to speak for more than five years.

His wife, Sally, shared a heartfelt message on the day of his passing.

My "gentle giant" Floyd went to be with his beloved Jesus," she wrote. "I'm glad he is no longer suffering. I'll see him again some day!"

McClung was born in California but moved across the country with family throughout his youth. He settled back on the West Coast and attended college at Southern California College (now Vanguard University) in Costa Mesa.

After graduating in 1967 with a degree in New Testament Studies, McClung traveled across the U.S. and spoke at churches and college campuses in an effort to recruit young people for summer outreaches to the West Indies.

While newly married, Floyd and Sally led a traveling outreach team in the early 1970s and continued to engage with students on university campuses around the world.

The McClung's moved to the Netherlands where they led work on the Ark, two houseboats anchored behind Amsterdam's Central Station that served as an outreach for drug addicts and hippies.

After the Ark, Floyd developed other ministries and grew in his leadership with Youth With a Mission (YWAM). He served a total of 35 years with YWAM, including 18 years in the Netherlands and nearly eight years as YWAM's International Executive Director.

YWAM co-founders Loren and Darlene Cunningham said, "Floyd McClung was a vital foundational leader, serving for many years in YWAM. He pioneered works in Afghanistan, India, Nepal, the Netherlands, California, Colorado, and other locations. His life, his teaching, his books, his leadership, and his Godly influence deeply impacted YWAM. He has so much lasting fruit – both inside YWAM and among those who came to Jesus through the initiatives he led. Only eternity will reveal the depth and breadth of his legacy."

Their vision for All Nations was "to see Jesus worshipped by all peoples of the earth, reaching the least, the last and the lost."

Floyd left YWAM to join Metro Christian Fellowship (MCF) in Kansas City, Missouri, where he pastored from 1999-2005. The following year, the couple moved to South Africa to launch All Nations.

"At a time when most people would consider retiring," Sally said, "we packed up everything, moved halfway around the world and started over!"

For 10 years, Floyd trained and mentored young people to become leaders. During that time, continuing to write, travel and speak internationally.

Sadly, Floyd suddenly became ill in February 2016 and was diagnosed with a bacterial infection. The illness led to septic shock, which damaged his muscles, nerves, and vital organs.

"While unable to use his voice, he nonetheless communicated through facial expressions and in various other ways to the many friends and family who visited him," Sally explained.

During the 50 years that Floyd served in ministry, he lived in Africa, Asia, Europe, and North America. He worked in every continent except Antarctica and wrote 18 books.

"Thousands of people from all over the world can attest to the profound impact Floyd had on their lives," said Sally. "While he has gone to be with the Lord, his voice is not silent. His books and recorded teachings will continue to inspire and challenge. His legacy continues. The day Floyd became ill he spoke to a group of All Nations students. In what turned out to be a prophetic word, he asked them, 'If I can't continue, will you finish the race?' His prayer would be that thousands will heed the call to go to the nations."

Dr. Mary Ho, international executive leader for All Nations, is inviting everyone to participate in a global prayer event on June 24. The special time of prayer will be in honor of the McClung family and All Nations globally.

To find out more about the global prayer gathering, click here.