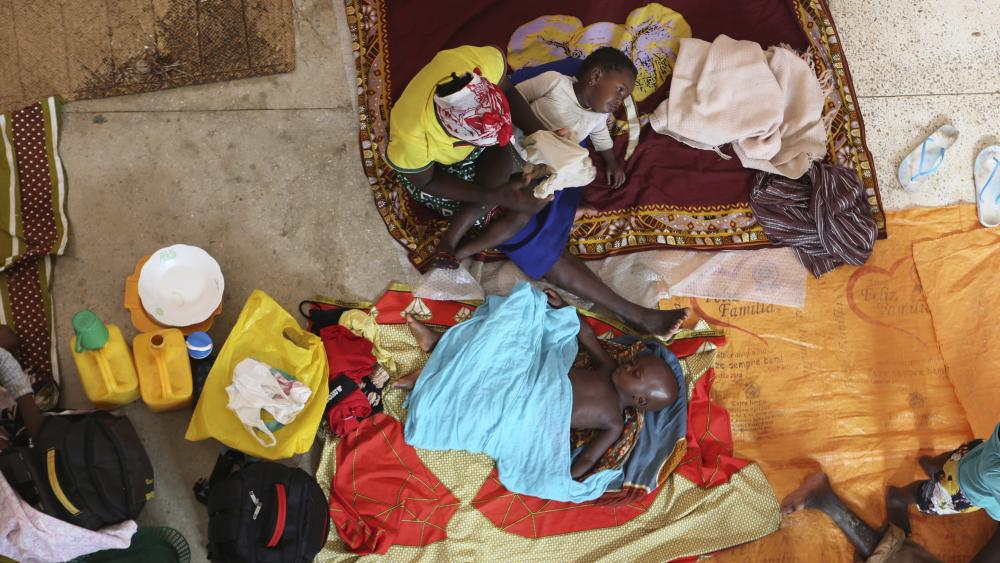 Monday, April, 29, 2019, a mother and her children prepare for the night inside a Roman Catholic Church in Pemba city on the northeastern coast of Mozambique. (AP Photo/Tsvangirayi Mukwazhi, FILE)

Children as young as 11 are being beheaded by the rebels, according to workers for Save the Children, who interviewed grief-stricken families.

The number of displaced has dramatically increased by more than 500,000 in the past year and nearly 1 million people are in need of food aid, according to the U.N. A high number of the displaced are dependent upon the generosity of already poor families, with shortages of water, food, and sanitation widespread.

More than 2,600 people have died in the conflict since it started in 2017, according to the Armed Conflict Location and Event Data Project.

In response to the deteriorating security situation in Cabo Delgado, the United States this week sent military specialists to train the Mozambican army to battle the extremists.

The extremists have held the port town of Mocimboa da Praia since August, and in recent months they have attacked several villages and made it unsafe to travel to other centers by road. The extremists are allied with the Islamic State group but are known locally as al-Shabab, although they have no known ties to the extremist rebels in Somalia who go by that name.

The conflict is in a resource-rich area where huge deposits of liquified natural gas have been discovered and the French gas firm Total has embarked on a multibillion-dollar investment.

Families fleeing the violence hike for days and nights on paths through the jungle, coming across the remains of those who died on the perilous journey or who were killed by the insurgents, according to Save the Children workers who interviewed survivors.

The rapidly increasing numbers of displaced people come as Cabo Delgado province is still recovering from severe cyclones in 2019.

“Reports of attacks on children sicken us to our core," said Chance Briggs, Save the Children’s country director in Mozambique. "Our staff have been brought to tears when hearing the stories of suffering told by mothers in displacement camps. This violence has to stop, and displaced families need to be supported as they find their bearings and recover from the trauma.”

War crimes have been committed by all sides fighting in Mozambique’s conflict, including the jihadi rebels, government forces and a South African mercenary outfit that provides helicopter support to government troops, according to international rights group Amnesty International.

The U.S. military specialists will conduct a two-month training program with Mozambican marines “to prevent the spread of terrorism and violent extremism,” the U.S. embassy in Mozambique's capital, Maputo, said in a statement Monday.

In addition to training, the U.S. government will also provide medical and communications equipment, said the statement.

Following the reports of abuses in the Mozambican conflict, the short U.S. statement emphasized that the trainers will promote human rights.

“The United States prioritizes the respect for human rights, protection of civilians, and engagement with civil society in all security assistance,” said the statement. “The United States is committed to supporting Mozambique with a multifaceted and holistic approach to counter and prevent the spread of terrorism and violent extremism.”

Tom Bowker in Uzes, France, contributed to this report.