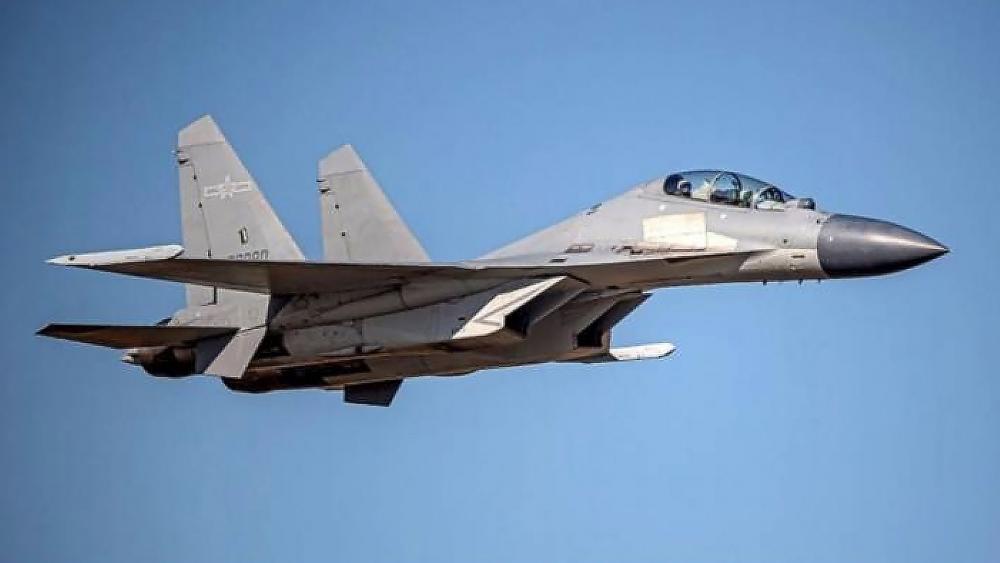 In this undated file photo released by the Taiwan Ministry of Defense, a Chinese PLA J-16 fighter jet flies in an undisclosed location. (Taiwan Ministry of Defense via AP, File)
6275553795001
Invasion Coming? China Rattles Taiwan with 149 Warplanes Prompting a Rebuke from US State Dept.
6275672030001
Taiwan Bracing for War After China Suddenly Ramps up Its Belligerent Provocation

ABOVE:  Author, columnist, and speaker Gordon Chang appeared on the Monday edition of CBN News' Faith Nation to talk about the significance of China's communist military flying planes in international air space. Faith Nation is seen weekdays on the CBN News Channel.

China's communist military flew another 56 fighter planes toward the independent country on Taiwan on Monday in the largest show of force on record, continuing three days of sustained military harassment against the self-ruled island.

The sortie included 34 J-16 fighter jets and 12 H-6 bombers, among other aircraft, according to Taiwan's Ministry of National Defense. The Taiwanese air force scrambled jets and monitored the movement of the Chinese warplanes on its air defense system.

"The United States is very concerned by the People's Republic of China's provocative military activity near Taiwan, which is destabilizing, risks miscalculations, and undermines regional peace and stability. We urge Beijing to cease its military, diplomatic, and economic pressure and coercion against Taiwan," State Department spokesperson Ned Price said in a statement.

The latest round of intimidation kicked off on Friday, October 1st, the 72nd anniversary of China's communist state.  The communist regime sent a total of 77 planes into Taiwan's air defense identification zone Friday and Saturday. They sent another 16 planes on Sunday. So the total number of provocative military flights from Friday-Monday amounts to at least 149.

Chinese expert and Author of The Coming Collapse of China, Gordon Chang says the provocation is more than just peacocking.

"We know that China is testing the Biden administration because, after the fall of Afghanistan, they said they were going to go after Taiwan and the U.S. wasn't going to do anything about it," Chang said. "I think that's what leaders in Beijing think, so this is an exceedingly dangerous situation."

The move has caused Taiwan's foreign minister to begin preparing for war with China, according to Australian Broadcasting News.

"The defense of Taiwan is in our own hands, and we are absolutely committed to that," Foreign Minister Joseph Wu said in an interview with the news outlet.

In a tweet on Oct. 1, the Taiwan Ministry of Foreign Affairs wrote, "Oct. 1 wasn't a good day. The #PLAAF flew 38 warplanes into #Taiwan's ADIZ, making it the largest number of daily sorties on record. Threatening? Of course. It's strange the #PRC doesn't bother faking excuses anymore."

As CBN News has reported, China has significantly ramped up military operations in the Taiwan Strait since President Biden took over the White House.

The latest maneuvers by the Chinese air force bring the total to 814 provocative flights, The Associated Press reported.

Beijing views the island nation as a renegade province and could be tempted to make a move because, according to some experts, Beijing sees the Biden administration as weak.

But would China actually risk war over Taiwan, and then, what would America do?

While China talks tough and has improved its military by stealing technology from the United States, Chinese leaders are keenly aware the nation has not fought a major war in 42 years and when it did in 1979, it struggled against Vietnam. Some experts say China was defeated.

Last April, the commander of the U.S. Navy's Pacific fleet, Admiral John Aquilino, warned the Senate Armed Services Committee that taking over Taiwan remains China's number one strategic priority. "My opinion is this problem is much closer to us than most think," Aquilino said. "And we have to take this on...with urgency."

With China's own military untested in combat while America has been fighting the war on terrorism across the Middle East, some experts say the last thing China wants is a shooting war with the United States. But China's true intentions at this moment remain a mystery.

Still, Chang says, "We have a policy called strategic ambiguity, which means we don't tell anyone what we're going to do. That policy worked in a more peaceful time and it's not working now which means we need to go into a policy of strategic clarity, telling China we will defend Taiwan."

Last June, world leaders from the Group of Seven industrialized nations said they were "seriously concerned" about the situation over the Taiwan Strait and encouraged a peaceful resolution.

"We remain seriously concerned about the situation in the East and South China Seas and strongly oppose any unilateral attempts to change the status quo and increase tensions," the G-7 said in a statement.