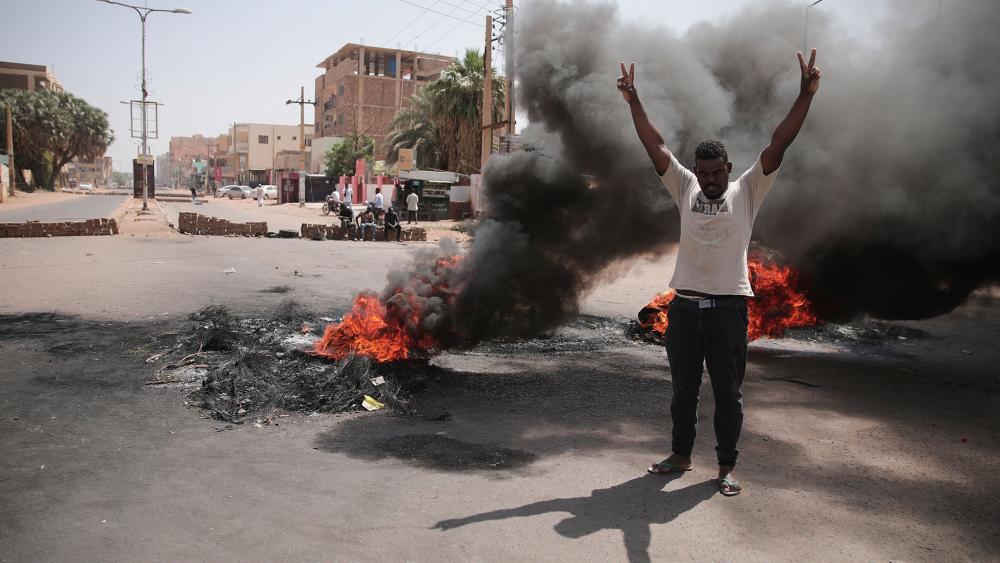 The coup in Sudan came after weeks of mounting tensions between military and civilian leaders over the transition to democracy. (AP Photo/Marwan Ali)
6279419283001
Sudan Coup: Democracy Delayed, or Stopping the Muslim Brotherhood?

This week's military coup in Sudan may have had more to do with stopping the advance of Islamic extremism in the region than it did with quashing democracy.

Appearing on this week's episode of The Global Lane, LTC (Ret.) Sargis Sangari, CEO of the Near East Center for Strategic Engagement said few of Sudan's neighbors in the region have criticized the coup because, unlike the Biden administration, they understand the military acted to safeguard the country and region from ISIS terrorists and the growing influence of the Islamic Brotherhood.

Sangari is a 20 plus year veteran of the United States Army Infantry and Special Operational Forces with multiple combat deployments to Iraq, a diplomatic assignment in Kuwait, and several other deployments to the Middle East, Europe, Asia, and Central America. He returned earlier this month from a fact-finding trip to the region.

"When I was in South Sudan we saw that there was a link with at least two individuals in the South Sudanese government that were advising the civilian leadership in this so-called transitional government (Sudan) and we saw possible ties to the Muslim Brotherhood," Sangari explained. "And I think in this particular case, it's very much possible  that the military made the move to ensure that the Muslim Brotherhood would not have another opportunity to come into the region because if it did that, then it would destabilize that entire area from Egypt all the way down to Kenya, up to Uganda and Tanzania."

In July 2013, the Egyptian military, led by Abdel Fattah el-Sisi, launched a coup ousting the Muslim Brotherhood government led by President Mohammed Morsy. Sangari said the Sudanese military may have feared that Sudan was proceeding along the same course as Egypt.

"I think the worry that the Sudanese had--the Sudanese military--was that it would be possible that what Egypt went through under the Obama administration where the Muslim Brotherhood came to power, that they were starting to feel that they were being squeezed to the same level under the current Biden administration who has some of the same old advisers that were under Obama," Sangari explained. "Jeff Feltman, who is a special envoy for the U.S. was there the day before the coup took place. So, you can kind of look at the possibility of how badly U.S. foreign policy is somewhat feckless in the region."

But Sangari suggests the Sudan military leadership felt pressure from Feltman and other U.S. officials who had urged them to move forward with the civilian government transition. He believes ill-informed U.S. diplomats may have been unaware that by doing so, the Muslim Brotherhood would possibly gain control in Sudan as it did in Egypt.

"It's the feckless ability of the U.S. to be able to effect foreign policy when you have your special envoy, the day after he leaves, for a coup to take place, and you have the POTUS and the U.S. not knowing what's happening. It's equivalent to when we had our CIA chief (Robert Burns) meet with the Taliban and within 72-hours an attack had taken place against U.S. forces which was the last final suicide against our forces before we left Afghanistan," Sangari insisted.

Sangari fears the United States is losing its footprint within the region and he said Israel may possess the best understanding about what is happening.

"The transitional government (Sudan) was looking forward to being a part of the Abraham Accords, and I think when you hear nothing really seriously coming out against this particular coup from the Israelis, it means they probably understood what was happening on the ground and the U.S. had no clue," he said.

So, how should the United States respond at this point?

Sangari said the United States must actively engage with Sudan and American partners in the region.

"You cannot support a coup, but at the same time, you have to understand why the coup took place. All we could do is ensure that we hold the current military powers in Sudan to their word that there will be elections in 2023 and help them and help the regional powers to finally get rid of the Muslim Brotherhood and ISIS from operating out of the Horn of Africa."