Milley: US Coordination With Taliban On ISIS-K Strikes 'Possible' 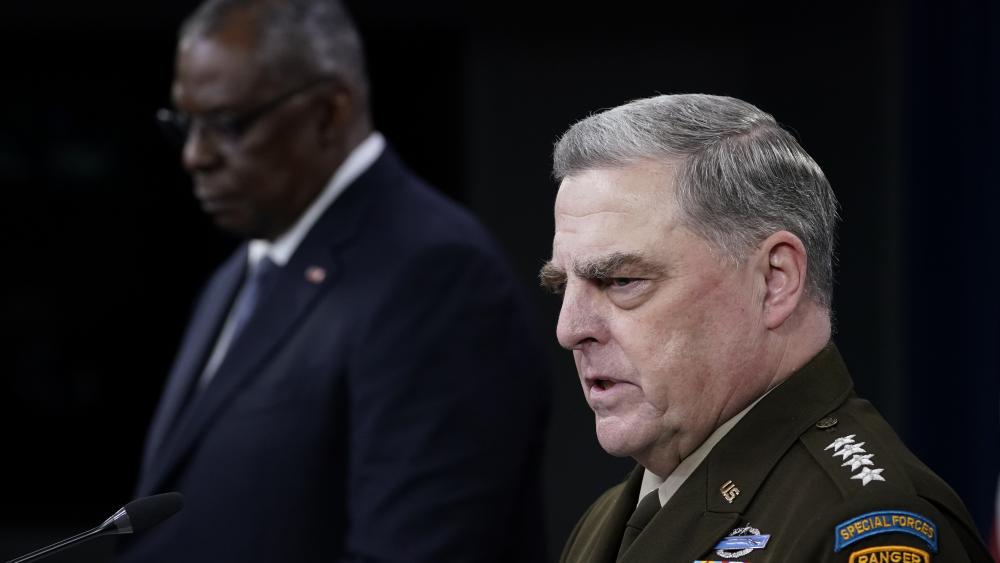 Joint Chiefs of Staff Gen. Mark Milley, right, answers a question during a briefing with Secretary of Defense Lloyd Austin, left, at the Pentagon in Washington, Wednesday, Sept. 1, 2021, about the end of the war in Afghanistan. (AP Photo/Susan Walsh)

WASHINGTON (AP) — Army Gen. Mark Milley, chairman of the Joint Chiefs of Staff, said it's “possible” the United States will seek to coordinate with the Taliban on counterterrorism strikes in Afghanistan against Islamic State militants or others.

Milley did not elaborate, and his comment Wednesday did not appear to suggest immediate plans to work with the Taliban.

U.S. military commanders coordinated daily with Taliban commanders outside the Kabul airport over the past three weeks to facilitate the evacuation of more than 124,000 people. But that was a matter of convenience for both parties and not necessarily a sign that they will pursue, or even want, a regular relationship in the future.

The U.S. military ousted the Taliban from power in the fall of 2001 and fought against them for the 19 years that followed.

The extent and nature of a U.S.-Taliban relationship, now that the war is over, is one of the key issues to be worked out. The U.S. diplomatic presence in Kabul has been moved to Doha, Qatar. President Joe Biden has noted several times recently that the Taliban are avowed enemies of the Islamic State group in Afghanistan, suggesting a shared interest with the United States.

At a Pentagon news conference with Defense Secretary Lloyd Austin, Milley called the Taliban “ruthless” adding, “Whether or not they change remains to be seen.” He suggested that the recent cooperative arrangement with the Taliban at Kabul airport was not necessarily a model for the future.

“In war you do what you must in order to reduce risk to mission and force, not what you necessarily want to do,” Milley said.

Biden has promised further targeting of the IS group in Afghanistan in response to the IS suicide bombing last week at a Kabul airport gate that killed scores of Afghans and 13 American service members. On Saturday the U.S. military carried out a drone strike in Afghanistan that it said killed two IS planners. On Tuesday, Biden said, “To ISIS-K: We are not done with you yet,” referring to the IS group.

Targeting Islamic State militants or other extremist groups, such as al-Qaida, will be more difficult with no U.S. military forces on the ground and no friendly government forces with which to share intelligence on extremist networks. But the Biden administration asserts that it can contain these groups by monitoring and potentially striking with assets based elsewhere in the region.

Although the Taliban oppose IS, it's far from clear that they will be inclined to work with the U.S. military or the Central Intelligence Agency now that they have regained power in Kabul. Milley has recent experience with Taliban leaders; twice last year, most recently in December, he met face-to-face with them in an attempt to slow their attacks on the U.S.-backed Afghan government, which collapsed in mid-August, triggering the frantic U.S.-led evacuation.

Austin sounded at least as skeptical as Milley regarding the possibility that the coordination in recent days at the Kabul airport suggests a future relationship with the Taliban.

“I would not make any leaps of logic to broader issues,” said Austin.

Both Austin and Milley commanded troops in Afghanistan during the 20-year war and their comments at Wednesday's news conference largely focused on tributes to those who served in Afghanistan, including those who died or were wounded. They also thanked all who contributed to the final airlift, which Austin called the largest evacuation of civilians in American history.

Milley and Austin urged war veterans to view their service as worthwhile and appreciated by the American public, while acknowledging that the memories can be painful.