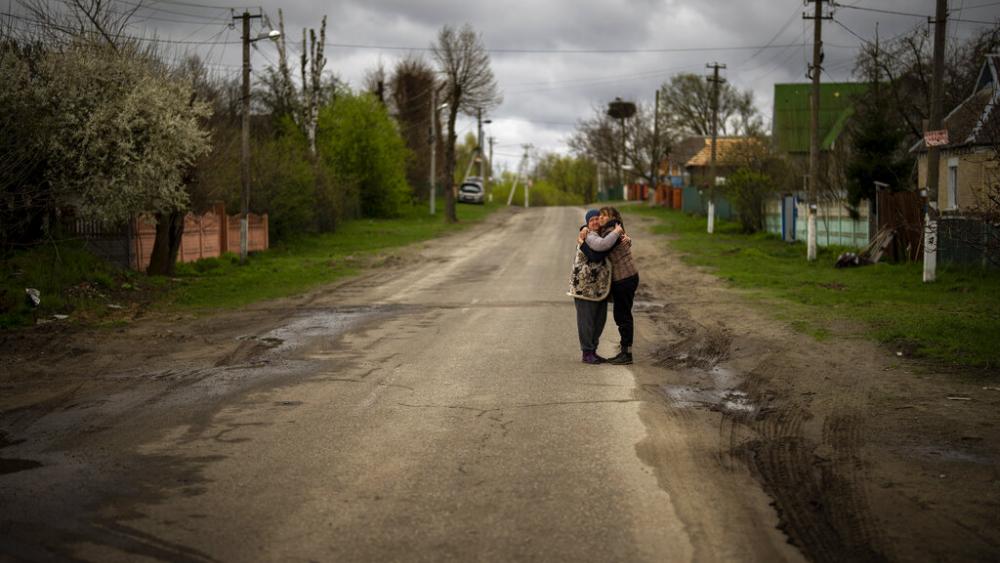 Tetyana Boikiv, 52, right, meets and hugs her neighbour Svitlana Pryimachenko, 48, during a funeral service for her husband, Mykola Moroz, 47, at the Ozera village, near Bucha, Ukraine on Tuesday, April 26, 2022. (AP Photo)

OKROVSK, Ukraine (AP) — The U.S. defense chief urged Ukraine's allies to “move at the speed of war” to get more and heavier weapons to Kyiv as Russian forces rained fire on eastern and southern Ukraine, and Russia cut off gas supplies to Poland and Bulgaria.

Just across the border in Russia, an ammunition depot in the Belgorod region was burning early Wednesday after several explosions were heard, the governor, Vyacheslav Gladkov, said on the messaging app Telegram. Early this month, Russia said two Ukrainian helicopter gunships hit an oil reservoir in the same region, causing a fire.

Russia’s state-controlled natural gas giant Gazprom said it cut supplies to NATO members Poland and Bulgaria on Wednesday after they refused to pay for the shipments in rubles. Poland has been a major gateway for the delivery of weapons to Ukraine and confirmed this week that it is sending the country tanks.

Gazprom in a statement warned that if Poland and Bulgaria siphon gas intended for other European customers, the deliveries to Europe will be reduced to that amount.

European gas prices have spiked by as much as 24% on the news. Benchmark Dutch futures traded at one point around 125 euros per megawatt hour.

“Gazprom’s move to completely shut off gas supplies to Poland is yet another sign of Russia’s politicisation of existing agreements & will only accelerate European efforts to move away from Russian energy supplies,” he wrote.

Poland said it was well-prepared after working for years to reduce its reliance on Russian energy. Poland also has ample natural gas in storage, and it will soon benefit from two pipelines coming online, analyst Emily McClain of Rystad Energy said.

Bulgaria gets over 90% of its gas from Russia, and officials said they were working to find other sources, such as from Azerbaijan.

Both countries had refused Russia’s demands that they pay in rubles, as have almost all of Russia's gas customers in Europe.

U.S. Defense Secretary Lloyd Austin said more help was on the way at a meeting Tuesday with officials from about 40 countries at the U.S. air base at Ramstein, Germany. “We’ve got to move at the speed of war,” Austin said.

He said he wanted officials to leave the meeting “with a common and transparent understanding of Ukraine’s near-term security requirements because we’re going to keep moving heaven and earth so that we can meet them.”

After unexpectedly fierce resistance by Ukrainian forces thwarted Russia's attempt to take Ukraine's capital, Moscow now says its focus is the capture of the Donbas, the mostly Russian-speaking industrial area in eastern Ukraine.

In the town of Pokrovsk in the Donetsk region, people fleeing the shelling lined up Tuesday to board a train headed to the far west of the country. One person was lifted onto the train in a wheelchair, another on a stretcher.

The passengers took with them cats, dogs, a few bags and boxes, and the memory of those who did not flee in time.

“We were in the basement, but my daughter didn’t make it and was hit with shrapnel on the doorstep” during shelling on Monday, said Mykola Kharchenko, 74. “We had to bury her in the garden near the pear tree.”

He said his village, Vremivka, was under heavy fire for four days and all but destroyed. With tears in his eyes, Kharchenko said he somehow held himself together at home, but once he reached the train station he fell apart. In a flash of anger, he lashed out at Russia.

“Is this liberation? From whom am I, a Russian speaker, from whom am I being liberated? From whom? From my daughter? From everything I have built during my whole life?”

In the gutted southern port city of Mariupol, authorities said Russian forces hit the Azovstal steel plant with 35 airstrikes over 24 hours. The plant is the last known stronghold of Ukrainian fighters in the city. About 1,000 civilians were said to be taking shelter there with an estimated 2,000 Ukrainian defenders.

Petro Andryushchenko, an adviser to Mariupol's mayor, said Russia was using heavy bunker bombs. He also accused Russian forces of shelling a route they had offered as an escape corridor from the steel mill.

Pavlo Kyrylenko, governor of the Donetsk region of the Donbas, said on the Telegram messaging app that Russian forces “continue to deliberately fire at civilians and to destroy critical infrastructure.”

Ukraine also said Russian forces shelled Kharkiv, the country’s second-largest city, which lies in the northeast, outside the Donbas. But it is seen as key to Russia's apparent bid to encircle Ukrainian troops in the Donbas from the north, east and south.

Ukrainian forces struck back in the Kherson region in the south.

The attack Tuesday on the bridge near Odesa — along with a series of strikes on key railroad stations a day earlier — appeared to signal a major shift in Russia’s approach. Until now, Moscow has spared strategic bridges, perhaps in hopes of keeping them for its own use in seizing Ukraine. But now it seems to be trying to thwart Ukraine’s efforts to move troops and supplies.

No injuries were reported in the strike on the bridge, and Ukraine's military said repair work was underway.

The southern Ukraine coastline and Moldova have been on edge since a senior Russian military officer said last week that the Kremlin’s goal is to secure not just eastern Ukraine but the entire south, so as to open the way to Trans-Dniester, a long, narrow strip of land with about 470,000 people along the Ukrainian border where about 1,500 Russian troops are based.

It was not clear who was behind the blasts in Trans-Dniester, but the attacks gave rise to fears that Russia is stirring up trouble so as to create a pretext to either invade Trans-Dniester or use the region as another launching point to attack Ukraine.

Ukrainian President Volodymyr Zelenskyy said the explosions were carried out by Russia and were “designed to destabilize,” with the intention of showing Moldova what could happen if it supports Ukraine.

Austin, the U.S. defense secretary, said the U.S. was still looking into blasts and trying to determine what was going on, but added: "Certainly we don’t want to see any spillover” of the conflict.

With the potentially pivotal battle for the east underway, the U.S. and its NATO allies are scrambling to deliver artillery and other heavy weaponry in time to make a difference.

Austin noted that more than 30 allies and partners have joined the U.S. in sending military aid to Ukraine and that more than $5 billion worth of equipment has been committed.

The U.S. defense secretary said the war has weakened Russia's military, adding, “We would like to make sure, again, that they don’t have the same type of capability to bully their neighbors that we saw at the outset of this conflict.”

A senior Kremlin official, Nikolai Patrushev, warned that “the policies of the West and the Kyiv regime controlled by it would only be the breakup of Ukraine into several states.”

Russian Foreign Minister Sergey Lavrov cautioned that if the Western flow of weapons continues, the talks aimed at ending the fighting will not produce any results.