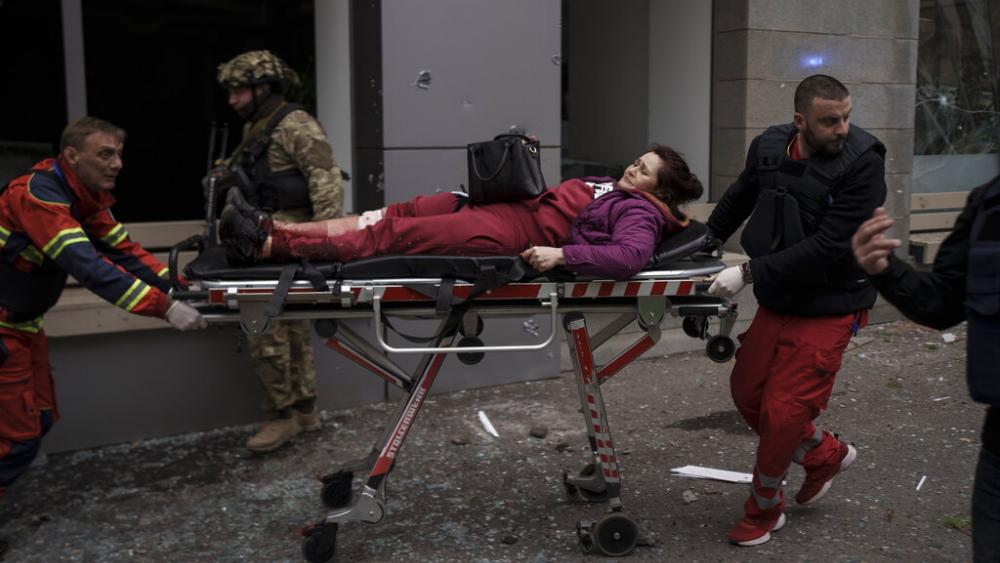 A woman is taken to an ambulance after being injured in a Russian bombardment in Kharkiv, Ukraine, Sunday, April 17, 2022. (AP Photo/Felipe Dana)
6304335562001
Ukraine Won't Surrender Crucial City to Russian Forces, Vows to 'Fight to the End'

Despite grueling conditions, Ukraine has declared that it will not give up, saying what happened in Mariupol could influence the entire war.

Amid the fallout from another round of deadly airstrikes, Russia is demanding surrender from Ukrainians who are still holding their ground in Mariupol.

"We will fight absolutely to the end, to the win, in this war," said Ukraine's Prime Minister Denys Shmyhal.

Vladimir Putin's forces appear closer than ever to claiming the port city, as supplies and ammo dwindle for Ukrainian defenders. The country is weary and war-torn with thousands trapped without food and water.

"We have already lost everything. Our whole apartment burned down. All things burned down. We don't have any of our things. If we cry, nothing will change," said one woman who lost her home.

In Irpin, bodies remain in the open as families gather to grieve and bury their loved ones.

Ukraine has thanked the United States for its promise to send another $800 million in aid but says more is needed.

The U.S. has committed nearly $2.6 billion so far.

Any day now, Russia's major escalation in the east is expected to begin. The White House says it's now considering sending an administration official to the capital city of Kyiv.

In the past few days, at least 18 civilians have reportedly been killed and many more were injured in the attacks.