Dutch Stars Depay, Gakpo Stand for Christ During FIFA World Cup: 'We Are Thankful to God' 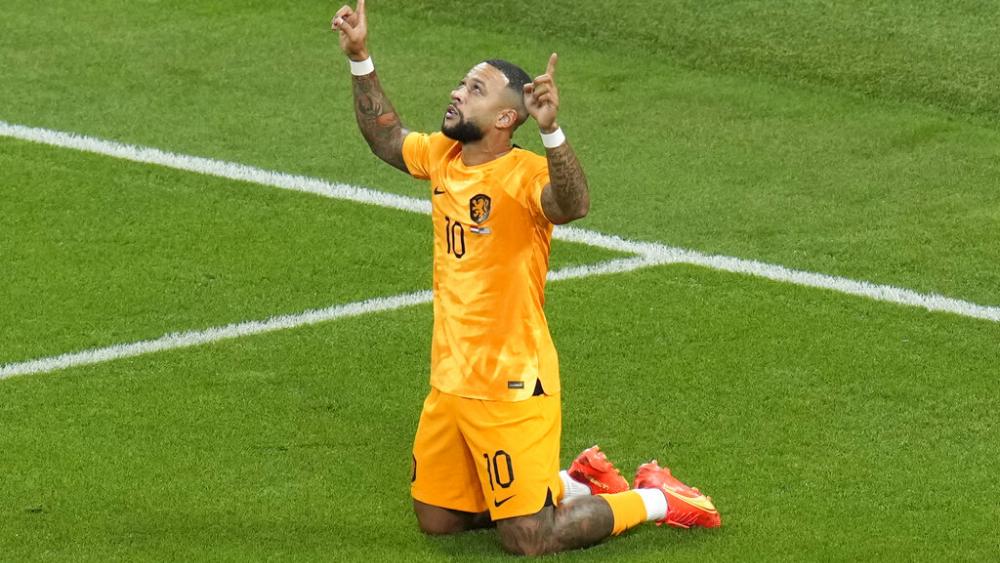 Memphis Depay of the Netherlands celebrates after scoring his side's first goal during the World Cup round of 16 soccer match in Qatar, Dec. 3, 2022. (AP Photo/Ricardo Mazalan)

Millions of soccer fans have been tuning in to the prestigious FIFA World Cup 2022 tournament over the past month. Friday and Saturday the contest reaches a fever pitch during the quarterfinals.

And before taking the pitch on Friday afternoon against Argentina and Lionel Messi, players from the Netherlands were preparing for the game by praying and studying the Bible.

"If I can't go to church, I call the pastor. I do that at (soccer club) PSV, and now too. Faith gives me peace. And strength when I need it," Dutch star striker Cody Gakpo told NRC. "I often read the Bible before I go to sleep. It is a kind of love letter that tells us how we should treat each other."

Gakpo and Memphis Depay, the Dutch international team's other top striker, are two players who are outspoken about their faith, and it is drawing their teammates closer to God.

"I try to read the Bible every day, I pray every day, I like to go to church, and I read many books about the faith," Gakpo said.

Gakpo and Depay have led Bible study for 15 Netherlands players during the tournament and it is changing some of their teammates' hearts.

"We often speak to each other about our faith, how we understand passages of the Bible which describe situations in life. This creates a bond among us teammates even if some of us do not know each other much yet," Gakpo explained.

The 28-year-old became a Christian in 2016 and told the Dutch newspaper Volkskrant that he is changed for "good."

"I changed for good, God had been always on my side, it was me who hadn't been there for Him before," he said.

God I know you be watching!
Thankful for each moment #Goddid pic.twitter.com/hTLCEkQ66X

During the playoffs in Qatar, Depay explained in a press conference, he celebrates his goals by covering his ears, Evangelical Focus reports.

"I indicate that I isolate myself from everything and I point to heaven," he said. "This shows that I read the Bible and continue to live in the word of Jesus. To what the outside world says, I have become deaf and blind."

He also told journalists recently that his faith in God gives him peace.

"Faith gives me inner peace, I can rely on my faith, on God, on my prayers, that's how I live my life. I don't worry too much about things, because I want to have fun, because the talent God gave me is to have fun and to entertain others."

Back again, I used my back against the wall
Never called on y'all, never count on y'all
Always count on God

He's done miracles on me pic.twitter.com/va52f1n521

One person the team's Bible study is having an effect on is Denzel Dumfries, a player who recently scored in the match against the United States.

"Cody Gakpo is a very religious person, in the last few days we have prayed a lot with him, he has shared his faith with us. How he finds himself in it. The [worship] sessions were very special, that gave me a lot of strength and I'm very grateful."

Gakpo knows that it is God who is ultimately reaching his teammates.

"I talk a lot about religion with Jurriën Timber, Denzel Dumfries, and a number of other boys. I often take the floor because I am the one who has studied the faith the longest," he said. "We support each other to be better people. Everyone should do what suits them best. Dumfries doesn't get that power from me but from God. It gives him the peace he needs in his head and his heart."

Gakpo who often shares his beliefs on social media is excited about the World Cup but is keeping it all in perspective.

"But faith is of course much more than football," he said. "We are thankful to God for what we have. We feel blessed as football players of Orange."