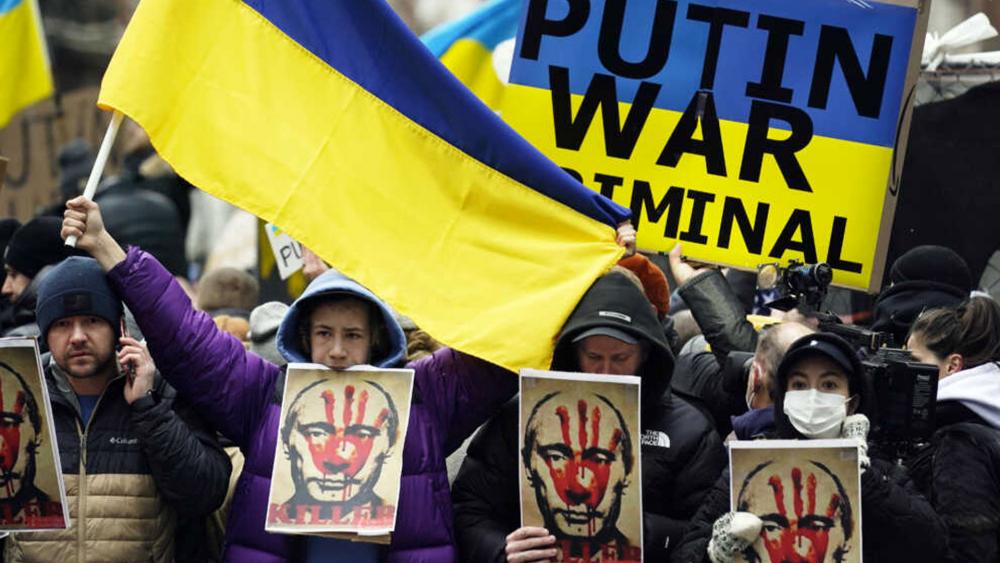 Pastors, celebrities, and politicians are responding to Russia’s violent invasion of Ukraine with powerful calls for prayer. From sitting members of Congress to well-known preachers, the list of those speaking out is growing.

Former Secretary of State Condoleezza Rice was among those who issued a firm and resolute response to Russian President Vladimir Putin’s sinister actions, proclaiming that his “aggression cannot stand.”

“Russian aggression cannot stand,” she tweeted. “Pray for the people of Ukraine.”

Former President George W. Bush, the commander-in-chief under whom Rice served, also issued a stunning rebuke — something that has been relatively rare for him since leaving office.

Russian aggression cannot stand. Pray for the people of Ukraine.

Bush lambasted Russia and called the assault on Ukraine the “gravest security crisis on the European continent since World War II.”

“I join the international community in condemning Vladimir Putin’s unprovoked and unjustified invasion of Ukraine. The American government and people must stand in solidarity with Ukraine and the Ukrainian people as they seek freedom and the right to choose their own future,” Bush said. “We cannot tolerate the authoritarian bullying and danger that Putin poses.”

“Do not imagine for a moment prayer doesn’t matter. Pray for Ukraine. Pray for divine intervention,” Beth Moore wrote. “Miraculous protection. Pray for the presence of Jesus to permeate households & hiding places & be a shield & comfort to them. Pray a Psalm—maybe 27 or 31—as intercession. Let’s pray.”

Do not imagine for a moment prayer doesn’t matter. Pray for Ukraine. Pray for divine intervention. Miraculous protection. Pray for the presence of Jesus to permeate households & hiding places & be a shield & comfort to them. Pray a psalm—maybe 27 or 31—as intercession.Let’s pray.

Harvest Christian Fellowship Pastor Greg Laurie also boldly called for prayer, not only for Ukraine but also for American leaders who are forced to respond to the chaos.

“As you know, Russia has attacked Ukraine. Let’s all be in prayer for the people there,” Laurie said. “Pray also for our leadership that they make wise and prudent decisions in the next few critical hours.”

As you know, Russia has attacked Ukraine. Let’s all be in prayer for the people there. Pray also for our leadership that they make wise and prudent decisions in the next few critical hours. pic.twitter.com/UvCnvkXloa

Here are some of the other powerful responses from politicians, celebrities, and others:

I’m moved by this recent picture of Ukrainian Christians kneeling in prayer.

Lord, we pray for the people of Ukraine during this difficult time. Protect the innocent and vulnerable. Give wisdom to global leaders. Humble the proud. Lord, we long & pray for peace. #PrayForUkraine pic.twitter.com/upfK5qD9cr

Putin’s invasion of Ukraine is an assault on a sovereign nation and will have devastating consequences for Ukrainian citizens. This senseless, unprovoked attack undermines democracy worldwide and we must hold Russia accountable. And we pray for the Ukrainian people and for peace.

Pray for the people of Ukraine.

Pray for Ukraine. May God bless its brave citizens.

Let’s pray for the people of Ukraine and our brothers and sisters in Christ throughout Ukraine who are facing untold destruction.

As Faithwire previously reported, some Russian citizens have also been risking freedom and safety to protest Putin’s actions, despite being warned not to make their voices heard on the matter.

Prayer has remained a powerful tool around the globe. Christians and Jewish adherents came together to pray in recent days.

And CNN’s Clarissa Ward also highlighted a group of Christians who knelt on the cold ground outside in Kharkiv to pray for peace. Ward described the decisive moment as “very moving.”

Please continue to pray for Ukraine, for Putin, for the Russians speaking out against their government, for American leaders, and for God’s will to be done and His name to be glorified in this tragic situation.