US Diplomats Flee as Putin Claims Independence for 2 Ukrainian Territories, Orders His Troops to Occupy Them 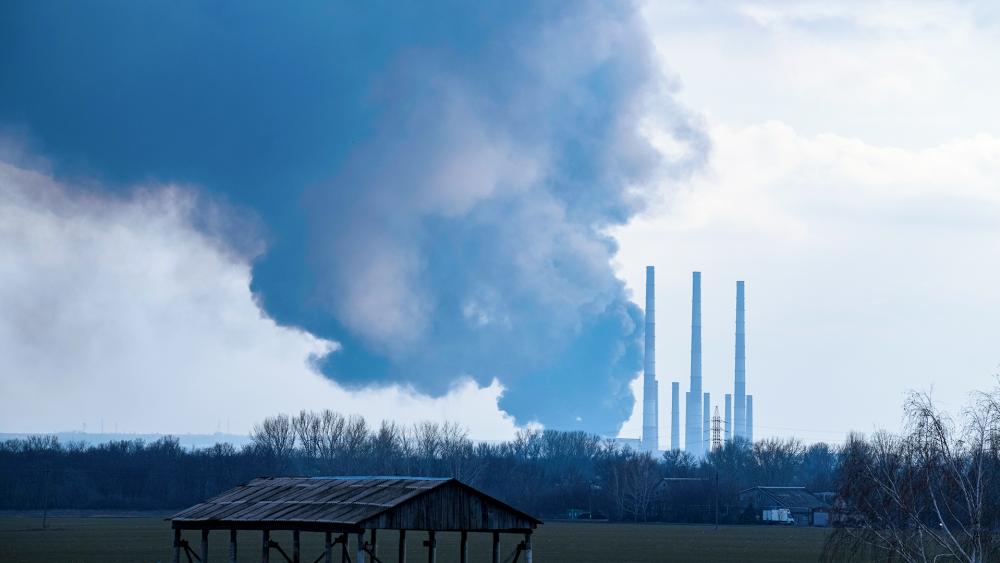 Smoke billows from a power and heating plant as it is was shelled in Shchastya, in the Luhansk region, eastern Ukraine, Tuesday, Feb. 22, 2022. (AP Photo/Vadim Ghirda)
6298495621001
US Diplomats Flee Ukraine as Putin Claims Control of 2 Ukrainian Territories and Orders Russian Troops to Seize Them

WASHINGTON – Overnight the few remaining American diplomats in Ukraine were temporarily evacuated to Poland as Russian President Vladimir Putin ratchets up the possibility of war in eastern Europe.

On Monday, Putin claimed that two areas of eastern Ukraine are now independent and then ordered Russian troops to invade those areas. The move is being met with global condemnation. The U.S. has already imposed some minor sanctions and more are expected Tuesday.

Overnight, U.S. Ambassador to the United Nations Linda Thomas-Greenfield called Putin's move a clear attack on Ukraine's sovereignty. "This move by President Putin is clearly the basis for Russia's attempt to create a pretext for a further invasion of Ukraine," said Greenfield. "He has since announced that he will place Russian troops in these regions. He calls them peacekeepers. This is nonsense. We know what they really are."

Former President Trump blasted the Biden administration for allowing Putin to have his way in Ukraine, saying, "If properly handled, there was absolutely no reason that the situation currently happening in Ukraine should have happened at all."


Russia now says its so-called recognition of the alleged independence of eastern territories of Ukraine extends even to Ukrainian-held parts of those areas.

The White House has urged Ukraine's President Volodymyr Zelensky to leave for his own safety. In a video posted to social media overnight, Zelensky urged calm and said his citizens are "strong and ready."

CBN Senior International Correspondent George Thomas is on the ground in Lviv, Ukraine, near the Polish border.

"Putin has at least three options right now," explained Thomas. "One, he can take the next couple of days and assess how the Ukrainians, as well as the international community respond. Two, he can create these so-called false flag operations, accusing the Ukrainians of trying to attack his forces that would give him the pretext to launch a larger invasion into the east. And three, he can launch an imminent full-scale invasion and take the entire two provinces and then set his sights on Kyiv."

The 27-nation European Union is also standing with the U.S. and NATO, pledging harsher sanctions against Russia.

Meanwhile, Christians in Ukraine have been seeking God's intervention through fasting and prayer:

Ukrainian Christians gather outdoors declaring today a day of fasting and prayer for their nation! pic.twitter.com/DzQl5rCeqI