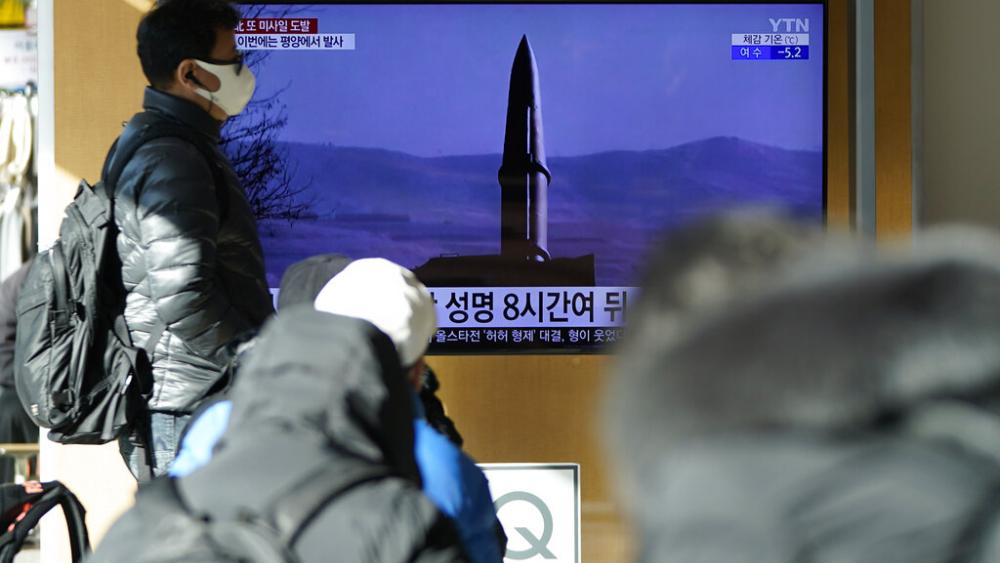 SEOUL, South Korea (AP) — North Korea fired two suspected ballistic missiles into the sea Monday in its fourth weapons launch this month, South Korea’s military said, with the apparent goal of demonstrating its military might amid paused diplomacy with the United States and pandemic border closures.

South Korea’s Joint Chiefs of Staff said the North likely fired two short-range ballistic missiles from an area in Sunan, the location of Pyongyang’s international airport. The missiles were launched four minutes apart Monday morning and flew around 380 kilometers (236 miles) on a maximum altitude of 42 kilometers (26 miles) before landing in waters off the country’s northeastern coast, it said.

The U.S. Indo-Pacific Command said the missiles did not pose an immediate threat to U.S. personnel or territory, or to its allies, but highlighted the destabilizing impact of the North’s “illicit” weapons program. Japan’s Defense Minister Nobuo Kishi said the missiles landed outside the Japan’s exclusive economic zone, and the chief cabinet secretary, Hirokazu Matsuno, condemned North Korea’s actions as threats to peace.

North Korea had conducted a pair of flight tests of a purported hypersonic missile on Jan. 5 and Jan. 11 and also test-fired ballistic missiles from a train Friday in an apparent reprisal over fresh sanctions imposed by the Biden administration last week for its continuing test launches.

North Korea has been ramping up tests in recent months of new, potentially nuclear-capable missiles designed to be maneuverable and fly at low altitudes, which potentially improve their chances of evading and defeating missile defenses in the region.

Some experts say North Korean leader Kim Jong Un is going back to a tried-and-true tactic of pressuring his neighbors and the U.S. with missile launches and outrageous threats before offering negotiations meant to extract concessions.

A U.S.-led diplomatic push aimed at convincing North Korea to abandon its nuclear weapons program collapsed in 2019 after the Trump administration rejected the North’s demands for major sanctions relief in exchange for a partial surrender of its nuclear capabilities.

Kim has since pledged to further expand a nuclear arsenal he clearly sees as his strongest guarantee of survival.

His government has so far rejected the Biden administration’s call to resume dialogue without preconditions, saying that Washington must first abandon its “hostile policy,” a term Pyongyang mainly uses to describe sanctions and combined U.S.-South Korea military exercises.