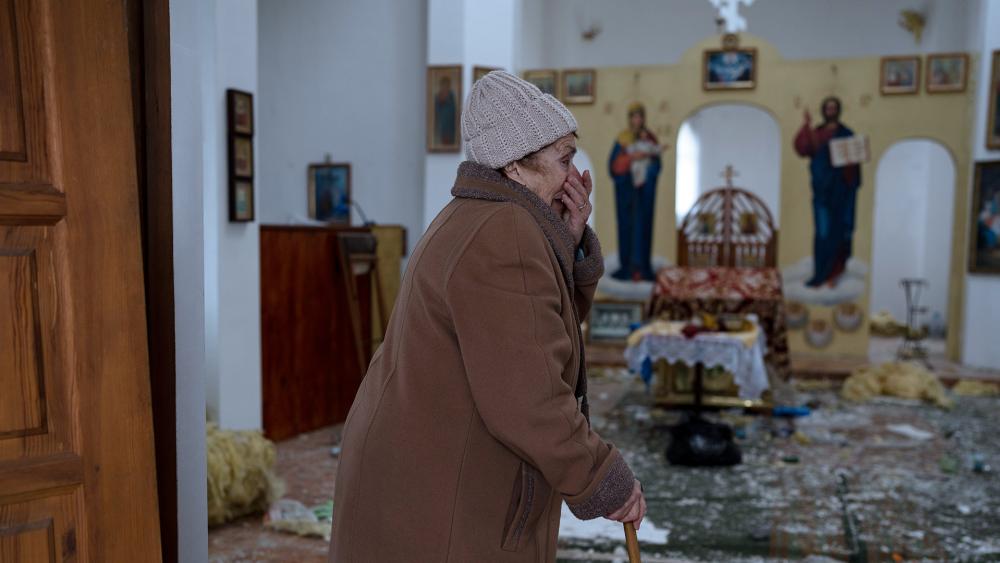 A woman cries as she enters a damaged church following a Russian attack in April, in the town of Makaro , Kyiv region Ukraine (AP Photo/Petros Giannakouris)

A historic Ukrainian monastery was destroyed by fire on Saturday after Russian artillery allegedly targeted the wooden structure.

The historic Saints Monastery of the Svyatogorsk Lavra's current building, erected in 1912, was burned beyond repair after invading Russian forces concentrated their bombardments in the eastern part of the country with artillery and airstrikes.

The fire at the monastery was first reported by Ukrainian journalist Agath Gorski, who also posted a video of the blaze on Twitter.

"The wooden All Saints Monastery of the Svyatogorsk Lavra in Donetsk region is on fire due to Russian shelling! The Lavra dates back to the 1500s. Second time Russia shells it. This is yet another act of Russian barbarism. For them, nothing is sacred," Gorski wrote. The journalist also tweeted a second image of the monastery on fire from hromadske.

The site of the sprawling, 16th-century monastery, is regarded as one of Ukraine's holiest Orthodox Christian sites. It sits on the bank of the Siverskiy Donets River, and has been hit several times previously during the war, most recently on Wednesday, when three monks were killed.

Ironically, the monastery is a religious institute under the protection of the Moscow Patriarchate, which has continued to side with Russian President Vladimir Putin after the Russian invasion, according to Fox News.

In his nightly video address Saturday, President Volodymyr Zelenskyy accused Russia of "deliberately and systematically destroying Ukrainian culture and its historical heritage, along with social infrastructure like housing and everything needed for normal life."

Zelenskyy said 113 churches have been damaged or destroyed during the invasion, including some that survived the battles of World War II.

"The combined use of air and artillery strikes has been a key factor in Russia's recent tactical successes in the region," the U.K. Ministry of Defense said in a Saturday assessment. The ministry warned that after launching so many guided missiles, Russia was employing unguided missiles that have "almost certainly caused substantial collateral damage and civilian casualties."

Russia Trying to Hold on to Occupied Territory, Installing Its Own Local Leaders

While Russian forces are concentrated on the Donbas, Ukraine has staged counterattacks to try to regain territory in the south.

But after seizing most of the Kherson and Dnipropetrovsk regions, as well as the port city of Mariupol, Moscow has installed local administrators, offered residents Russian passports, and taken other steps to consolidate its hold on occupied areas.

The Institute for the Study of War, a Washington-based think tank, said Russian-installed officials and troops face growing resistance among the local population and "an increase in partisan activity in southern Ukraine."

The institute cited accounts on Russian Telegram channels about threats against locals who received Russian passports.

The Ukrainian Center for National Resistance, which established a website to advise people on sabotage and other techniques, said Kherson residents were encouraged to burn down a Russian passport center.

The Ukrainian military noted with approval the trouble that occupation authorities were encountering, saying Russian-installed leaders in Kherson were wearing bulletproof vests and traveling in armored vehicles.