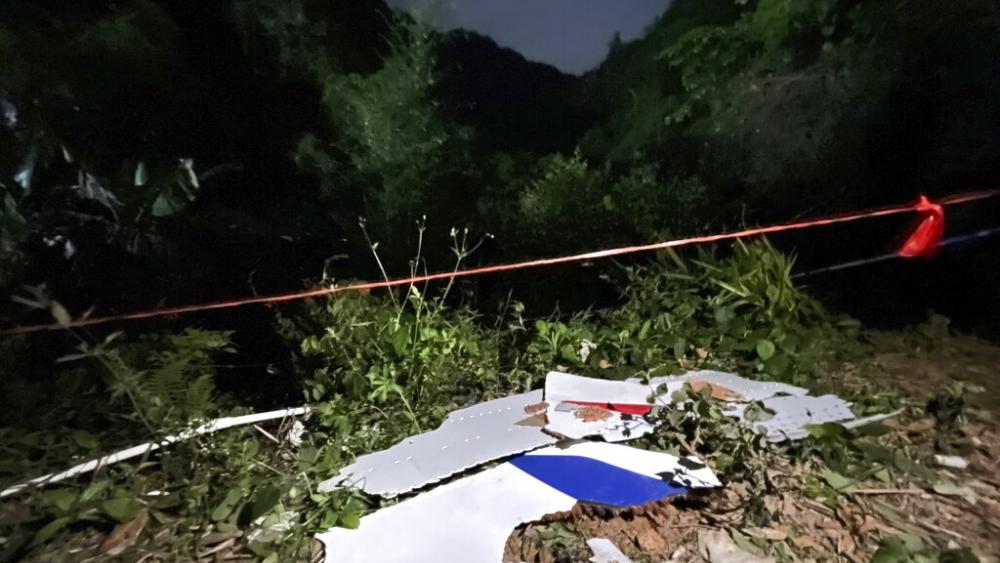 In this photo released by China's Xinhua News Agency, debris is seen at the site of a plane crash in Tengxian County in southern China's Guangxi Zhuang Autonomous Region, Tuesday, March 22, 2022. (Zhou Hua/Xinhua via AP)

KUNMING, China (AP) — No survivors have been found as rescuers on Tuesday searched the scattered wreckage of a China Eastern plane carrying 132 people that crashed a day earlier on a wooded mountainside in China's worst air disaster in more than a decade.

“Wreckage of the plane was found at the scene, but up until now, none of those aboard the plane with whom contact was lost have been found," state broadcaster CCTV said, more than 20 hours after the Monday afternoon crash.

The Boeing 737-800 crashed near the city of Wuzhou in the Guangxi region while flying from Kunming in the southwestern province of Yunnan to the industrial center of Guangzhou along the east coast. It ignited a fire big enough to be seen on NASA satellite images.

The crash created a deep pit in the mountainside, the official Xinhua News Agency reported, citing rescuers. The report said drones and a manual search would be used to try to find the black boxes, which hold the flight data and cockpit voice recorders essential to crash investigations.

A base of operations was set up near the crash site with rescue vehicles, ambulances and an emergency power supply truck parked in the narrow space. Soldiers in camouflage joined helmeted rescue workers in orange jump suits in combing the charred crash site and surrounding heavily dense vegetation.

The steepness of the slope made positioning of heavy equipment difficult, although with few large pieces of the aircraft remaining, there appeared little need for their use.

The plane was carrying 123 passengers and nine crew members, the Civil Aviation Administration of China said. It was about an hour into the flight, and nearing the point at which it would begin descending into Guangzhou, when it pitched downward.

Chinese President Xi Jinping called for an “all-out” rescue operation, as well as for an investigation into the crash and to ensure complete civil aviation safety.

At a hotel near the Kunming airport where the plane took off, about a dozen people, some in jackets identifying them as members of China's aviation agency, huddled around tables and read documents. Police and security guards at an airline office near the airport ordered journalists to leave.

Family members of those on board began gathering at Guangzhou airport, where they were escorted to a reception center manned by employees in full protective gear guarding against the spread of the coronavirus.

At least five hotels with more than 700 rooms have been requisitioned for family members, reports said.

The crash site is remote, accessible only by foot and motorcycle, in Guangxi, a semitropical region of mountains and rivers famed for some of China’s most spectacular scenery.

The region lies just east of the agricultural, mining and tourism center of Yunnan province, of which the capital is Kunming, a city of 8.5 million that is a hub for trade with Southeast Asia and the northern end of a high-speed railway to neighboring Laos that opened in December.

Guangzhou to the west is China’s traditional foreign trade capital, lying at the heart of export-driven manufacturing industries in the country’s southeast that supply the world’s smartphones, toys, furniture and other goods and is a hub for a growing Chinese auto industry.

Also known as Canton, the city of 18.5 million is home to the Canton Trade Fair, the world’s biggest annual trade show. The Auto City district on Guangzhou’s northern outskirts has one of China’s biggest state-owned automakers, GAC Group, as well as factories for joint ventures operated by Toyota and Nissan and smaller brands.

All of the more than 100 737-800s in China Eastern’s fleet are being grounded, China's Transport Ministry said. With no word on when they could fly again, the grounding could potentially further disrupt domestic air travel already being curtailed as China deals with its largest coronavirus outbreak since the initial peak in early 2020.

Aviation experts said it is unusual to ground an entire fleet of planes unless there is evidence of a problem with the model. China has more 737-800s than any other country — nearly 1,200 — and if identical planes at other Chinese airlines are grounded, it “could have a significant impact on domestic travel,” said aviation consultant IBA.

Boeing 737-800s have been flying since 1998, and Boeing has sold more than 5,100 of them. They have been involved in 22 accidents that damaged the planes beyond repair and killed 612 people, according to data compiled by the Aviation Safety Network, an arm of the Flight Safety Foundation.