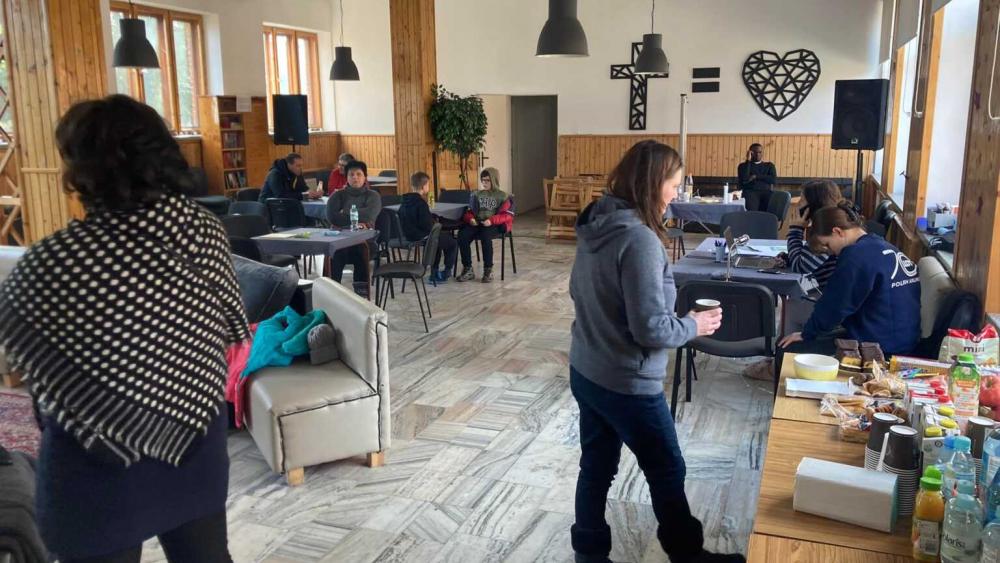 Christians in Polish Baptist churches work in shifts so they are ready to receive refugees 24 hours a day. (Photo courtesy of Chelm Baptist Church, IMB)

The moment he heard about Russia’s invasion of Ukraine, Polish Pastor Henryk Skrzypkowski and his church began purchasing beds, blankets, and other supplies for the impending influx of refugees.

“It was a step by faith,” the pastor told Faithwire, sitting alongside Dr. Paul Chitwood, president of the Southern Baptist Convention’s International Mission Board. Now, he said, Chelm Baptist Church is, on any given day, housing more than 200 refugees who have crossed the Ukrainian border into Poland.

LISTEN TO THE LATEST EPISODE OF THE FAITHWIRE PODCAST:

Skrzypkowski’s church — along with many other congregations in the region — is serving as a receiving line for those fleeing the unfolding war in Ukraine, most of whom are women and children, as men have been told to stay behind to fight Russian forces. On Tuesday alone, the church helped a handful of families relocate to Gdańsk, Poland, Germany, and Belgium.

Chitwood, who arrived in Poland Monday, praised the local church for its efforts.

Skrzypkowski's response is emblematic of so many Christians throughout Poland. The “loud and clear” message Chitwood said he’s seen from believers throughout the region is one of compassion as they’ve watched “so many people suffering, wanting to help, wanting to share the love of Christ with them and meet their needs.”

The help from Polish Christians is critical in this moment, the IMB leader explained, because there is a real sense of desperation among Ukrainian pastors and laypeople traumatized by Russian President Vladimir Putin’s invasion.

While undoubtedly devastating, Skrzypkowski — a father of seven biological children and nine foster children, three of whom have Down syndrome — believes there is a divine purpose at play.

There has been tension between Poles and Ukrainians since the end of World War II, much of it stemming from nationalists who formed the Ukrainian Insurgent Army (UPA) in 1942. At the time, the leaders of the UPA ordered massacres against Poles in Volhynia. Although the two countries have since allied themselves with one another, tensions between citizens of each country have not entirely faded.

“I think this moment is a historical and spiritual moment,” Skrzypkowski explained. “These historical problems — it was in hearts, in souls of people for many, many years. People have a problem to forgive one another. But this moment is the moment when God created a new situation between our nations. It’s a new future. Now we have unity — spiritual unity.” 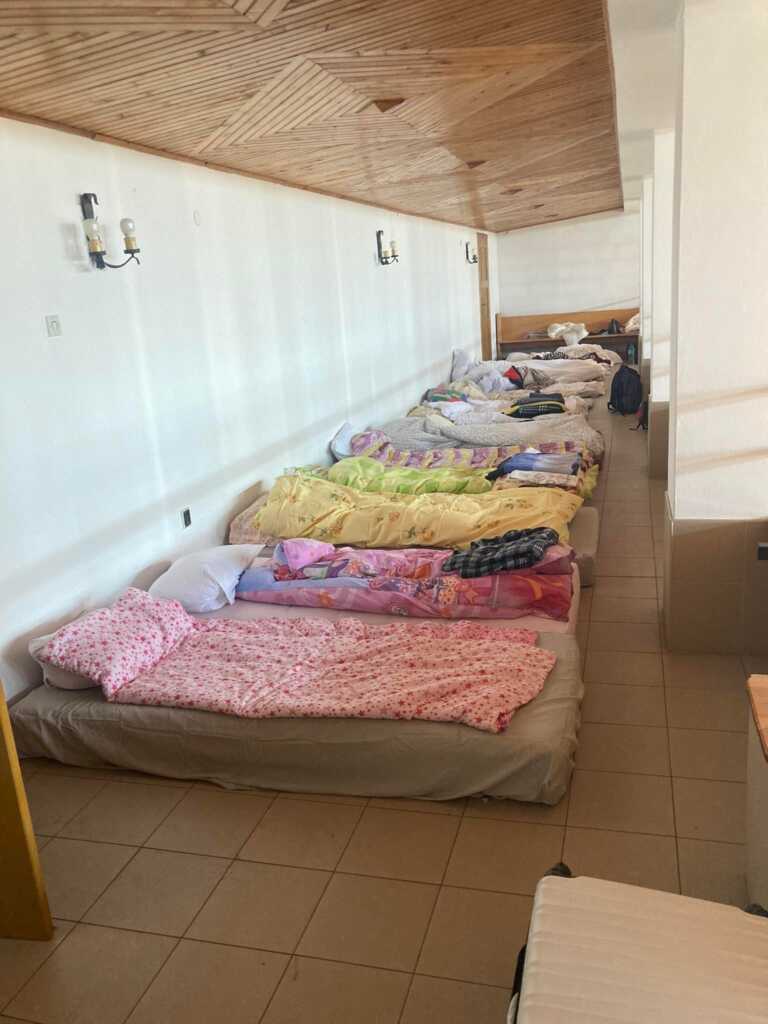 A hallway in a Polish Baptist Church has become a bedroom, ready to receive refugees. (Photo courtesy of Chelm Baptist Church, IMB)

The pastor explained there are some 6,000 Baptists in 100 or so churches spread across Poland, so many of whom have opened their homes and their “hearts” to Ukrainian refugees seeking safety.

One of the people Skrzypkowski church has helped is André, a husband and father of seven children on their way to Germany.

Speaking through a translator, André told Faithwire cities across Ukraine have been destroyed as families huddle in bomb shelters and basements, many struggling to find food to eat. He asked Christians in the U.S. to pray for the many families who are, like him, trying to escape Ukraine to find safety in neighboring countries.

“We are thankful for people like Henryk, the pastor here who is providing food and a place to stay for people who are on their way to other places,” he said. “Pray for Ukrainians who are in need during this time. Please help the Ukrainians.”

André urged those who are able — either through prayer or in physical ways — to help Ukrainians, referencing Jesus’ words in Matthew 25, when He said: “Truly I tell you, whatever you did for one of the least of these brothers and sisters of mine, you did for me” (NIV).

“So please, in this time of need, help the least of these,” he said.

Skrzypkowski said Ukraine’s success in defeating Russia is not only good for Ukraine and Poland but also for the rest of Europe. Should Kyiv fall to Putin’s regime, he added, the situation in Europe would be “very, very difficult for many years.”

“So we pray for Ukrainians,” he said, noting his church is praying also for government leaders in the U.S. and around the world. “We pray for unity. In war, we have to help Ukraine.”

Even when the conflict between Russia and Ukraine dies down — regardless of the outcome — Poland will have to adjust to a new reality. So far, some 100,000 Ukrainians have fled their country and into Poland, according to Polish Deputy Interior Minister Pawel Szefernaker, and that number is expected to rise in the coming days.

While some won’t remain in Poland, many will. 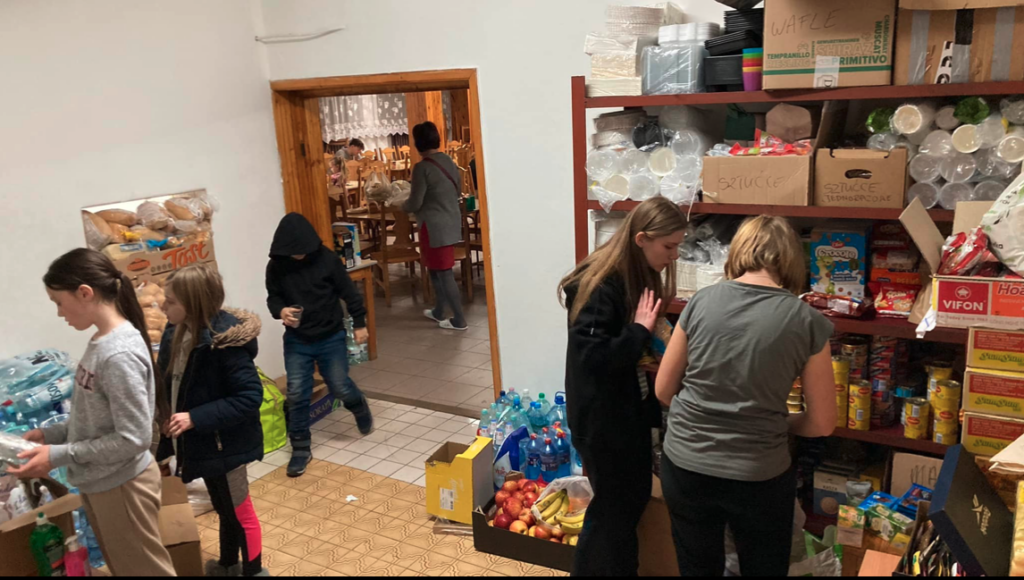 “In the next two weeks, people will be tired,” Skrzypkowski said. “So I think we must be thinking about and work how we help [Ukrainians] for the future, how we find them work, houses, schools for their kids. Please pray for us and think of us about the future.”

“Even if the war were to end today,” he said, “the country has been left devastated. But certainly, it doesn’t look like the war is going to end today. So the problem will continue on for a long time.”

Chitwood is nevertheless encouraged by the outpouring of hope he’s seen from Ukrainians and Poles alike.

“As Pastor Henryk said, we’re already seeing good come in the relationships between Poles and Ukrainians,” Chitwood recalled, referencing Romans 8:28, in which the Apostle Paul wrote that God works all things together “for the good of those who love Him” (NIV). He added, “It gives me hope for the future even when it may seem like such a hopeless situation in so many ways.”

The IMB president encouraged people to visit sendrelief.org to find a “prayer guide” for the situation in Ukraine as well as information on how to donate to the work of the IMB’s Send Relief ministry.

“Every penny of that gift will be used here, on the ground to meet the needs of the Ukrainian refugees, the Ukrainian people,” Chitwood noted. “None of that is used for overhead or promotion. Any gift goes directly to the need, 100%.”