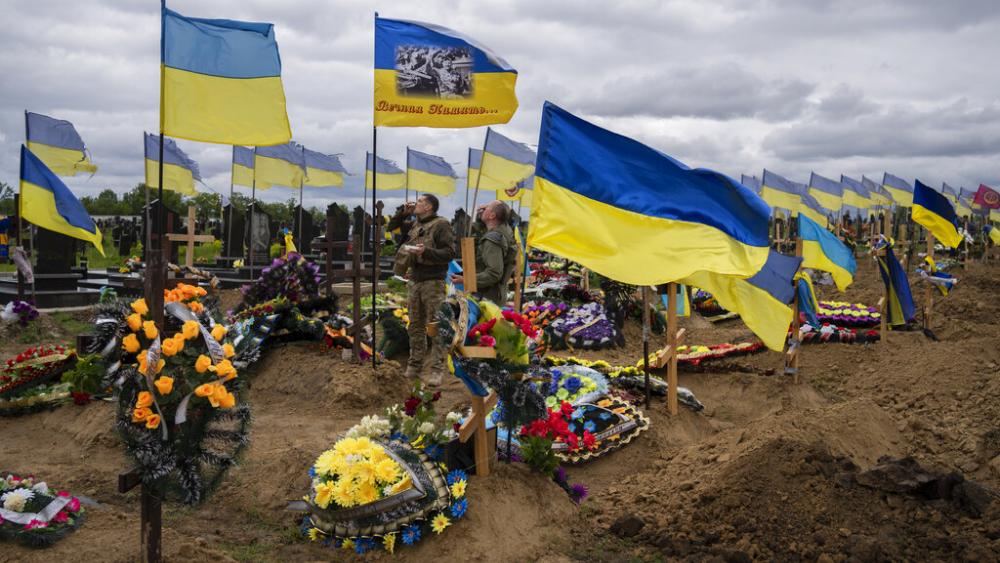 KYIV, Ukraine (AP) — Russian forces have stepped up shelling in Ukraine's eastern industrial heartland as they press their offensive in the region that is now the focus of fighting in the 3-month-old war.

Meanwhile, a Ukrainian court is expected to sentence a Russian soldier on Monday in the first war crimes trial of the conflict. The 21-year-old sergeant, who has pleaded guilty to shooting a Ukrainian man in the early days of the war, could get life in prison.

Grinding battles in the Donbas, where Ukrainian and Russian forces are fighting town by town, have forced many civilians to flee their homes.

“We haven’t been able to see the sun for three months. We are almost blind because we were in darkness for three months,” said Rayisa Rybalko, who hid with her family first in their basement and then in a bomb shelter at the local school before fleeing their village of Novomykhailivka. “The world should have seen that.”

Her son-in-law Dmytro Khaliapin said heavy artillery pounded the village. “Houses are being ruined,” he said. “It’s a horror.”

Polish President Andrzej Duda traveled to Kyiv on Sunday to support Ukraine’s European Union aspirations and addressed Ukraine’s parliament, receiving a standing ovation when he thanked the lawmakers for letting him speak where “the heart of a free, independent and democratic Ukraine beats.”

Poland has become an important ally of Ukraine, welcoming millions of Ukrainian refugees and becoming a gateway for Western humanitarian aid and weapons and a transit point for some foreign fighters who have volunteered to fight Russian forces.

Western support — both financial and military — has been key to Ukraine's defense, helping their outgunned and outnumbered forces to repel Russia's attempt to take the capital of Kyiv and fight them to a standstill in other places. In the face of those setbacks, Moscow has outlined more limited goals in Ukraine, with its sights now on trying to expand the territory that Russia-backed separatists have held since 2014.

Ukrainian forces dug in around Sievierodonetsk, the main city under Ukrainian control in the Luhansk province of the Donbas, as Russia intensified efforts to capture it. Gov. Serhiy Haidai accused the Russians of “simply intentionally trying to destroy the city ... engaging in a scorched-earth approach.”

Haidai said Sunday that the Russians had occupied several towns and cities in Luhansk after indiscriminate, 24-hour shelling and concentrating forces and weaponry there, bringing in troops from Kharkiv to the northwest, Mariupol to the south, and from inside Russia.

But the Ukrainian military said that Russian forces were unsuccessful in their attack on Oleksandrivka, a village outside of Sievierodonetsk.

Ukraine’s parliament voted Sunday to extend martial law and mobilize its armed forces for a third time, until Aug. 23. Ukrainian officials have said little since the war began about the extent of their country’s casualties, but Ukrainian President Volodymyr Zelenskyy said Sunday that 50 to 100 Ukrainian fighters were being killed, apparently each day, in the east.

While the east is now the focus of flighting, the conflict is not confined there. Powerful explosions were heard early Monday in Korosten, about 160 kilometers (100 miles) west of Kyiv, the town’s deputy mayor said. It was the third straight day of apparent attacks in the Zhytomyr District, Ukrainian news agencies reported.

In other developments, Ukraine’s first lady, Olena Zelenska, gave a rare interview to national broadcaster ICTV alongside her husband and said she has hardly seen him since the war began.

“Our family, like all Ukrainian families, is now separated,” she said.

Zelenskyy called the interview itself “a date on air,” and the couple, who have two children, joked in front of the journalists.

“We are joking, but we are really waiting, like everyone else, to be reunited, like all families in Ukraine who are separated now, waiting for their relatives and friends who want to be together again,” he said.