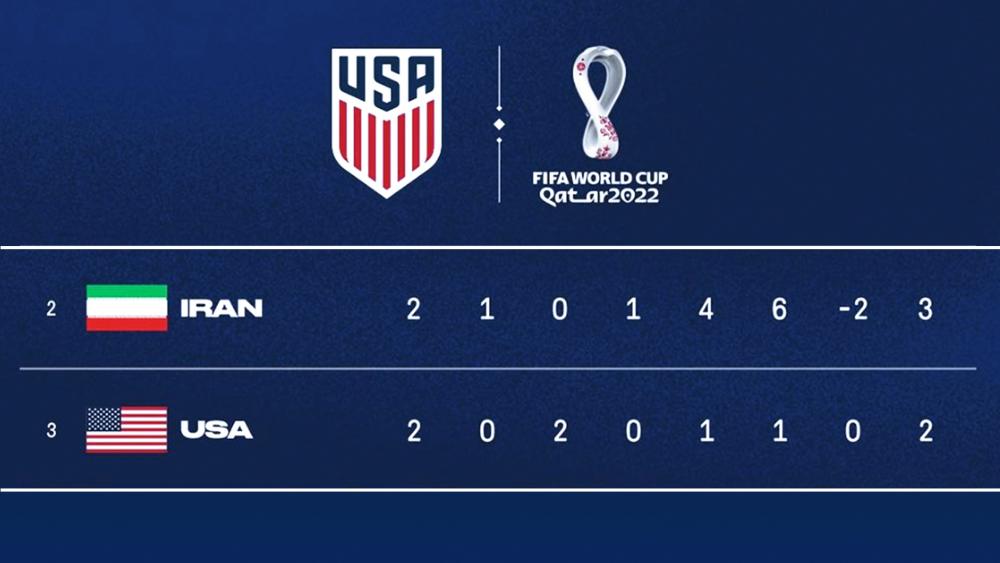 A U.S. soccer federation screenshot displaying Iran's national flag on social media without the emblem of the Islamic Republic. (Instagram via AP)

DOHA, Qatar (AP) - The U.S. soccer federation is displaying Iran's national flag on social media without the emblem of the Islamic Republic, saying it supports protesters in Iran ahead of the two nations' World Cup match Tuesday.

The federation said in a statement Sunday that it decided to forego the official flag on social media accounts to show “support for the women in Iran fighting for basic human rights.”

The Twitter account of the U.S. men's team displayed a banner with the squad's matches in the group stage, with the Iranian flag only bearing its green, white and red colors. The same could be seen in a post on its Facebook and Instagram accounts laying out the point totals so far in its group.

The U.S. soccer federation displayed the official Iranian flag in a graphic showing Group B standings on its website.

The absence of the emblem comes as monthslong demonstrations have challenged Iran's government since the Sept. 16 death of 22-year-old Mahsa Amini, who had been detained by the country's morality police.

The protests have seen at least 450 people killed since they started, as well as over 18,000 arrested, according to Human Rights Activists in Iran, an advocacy group following the demonstrations.

Iran has not released casualty or arrest figures for months and alleges without providing evidence that the protests have been fomented by its enemies abroad, including the U.S.

Tehran also restricts press access and has detained over 63 reporters and photographers since the demonstrations began, according to the Committee to Protect Journalists, making covering the unrest that much more difficult.

Iran's mission to the United Nations and its soccer federation did not immediately respond to a request for comment. As comments raged online, Iran's semiofficial Tasnim news agency described the U.S. federation as “removing the symbol of Allah” from the Iranian flag.

The Islamic Republic emblem, designed in 1980, is four curves with a sword between them. It represents the Islamic saying: “There is no god but God.” It also resembles a tulip or lotus.

At the top and the bottom of the flag, there are 22 inscriptions of “God is Great” as well, which honors the date on the Persian calendar when the Islamic Revolution took hold.

The flag has become a point of contention at the World Cup. Apparent pro-government supporters have waved it, shouting at those demonstrating over Amini's death. Others at matches have waved Iran's lion and sun flag, an emblem of its former ruler, the late Shah Mohammad Reza Pahlavi.

More security forces could be seen at Iran's last match against Wales. In the capital Tehran, anti-riot police - the same ones cracking down on protests - waved the Iranian flag after the Wales win, angering demonstrators.