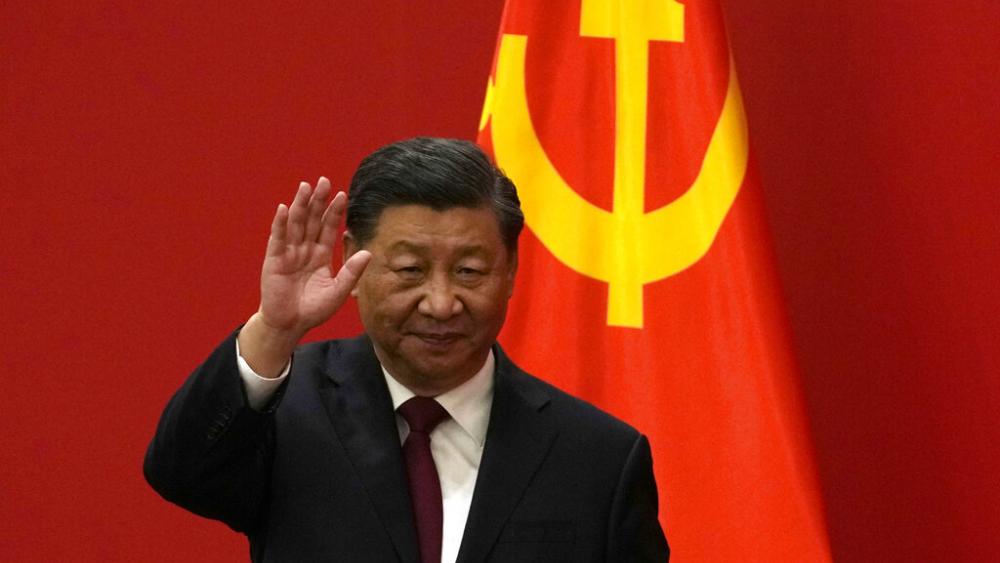 Chinese President Xi Jinping waves at an event to introduce new members of the Politburo Standing Committee at the Great Hall of the People in Beijing, Sunday, Oct. 23, 2022. (AP Photo/Andy Wong)

BEIJING (AP) — President Xi Jinping, China’s most powerful leader in decades, increased his dominance Sunday when he was named to another term as head of the ruling Communist Party in a break with tradition and promoted allies who support his vision of tighter control over society and the struggling economy.

Xi, who took power in 2012, was awarded a third five-year term as general secretary, discarding a custom under which his predecessor left after 10 years. The 69-year-old leader is expected by some to try to stay in power for life.

The party also named a seven-member Standing Committee, its inner circle of power, dominated by Xi allies after Premier Li Keqiang, the No. 2 leader and an advocate of market-style reform and private enterprise, was dropped from the leadership Saturday. That was despite Li being a year younger than the party's informal retirement age of 68.

“Power will be even more concentrated in the hands of Xi Jinping,” said Jean-Pierre Cabestan, a Chinese politics expert at Hong Kong Baptist University. The new appointees are “all loyal to Xi,” he said. "There is no counterweight or checks and balances in the system at all.”

On Saturday, Xi’s predecessor, 79-year-old Hu Jintao, abruptly left a meeting of the party Central Committee with an aide holding his arm. That prompted questions about whether Xi was flexing his powers by expelling other leaders. The official Xinhua News Agency later reported Hu was in poor health and needed to rest.

Xi and other Standing Committee members — none of them women — appeared for the first time as a group before reporters in the Great Hall of the People, the seat of China's ceremonial legislature in central Beijing.

The No. 2 leader was Li Qiang, the Shanghai party secretary. That puts Li Qiang, who is no relation to Li Keqiang, in line to become premier, the top economic official. Zhao Leji, already a member, was promoted to No. 3, likely to head the legislature. Those posts are to be assigned when the legislature meets next year.

Leadership changes were announced as the party wrapped up a twice-a-decade congress that was closely watched for initiatives to reverse an economic slump or changes in a severe “zero-COVID” strategy that has shut down cities and disrupted business. Officials disappointed investors and the Chinese public by announcing no changes.

The lineup appeared to reflect what some commentators called “Maximum Xi,” valuing loyalty over ability. Some new leaders lack national-level experience as vice premier or Cabinet minister that typically is seen as a requirement for the post.

Li Qiang's promotion served as apparent confirmation, as it puts him in line to be premier with no background in national government. Li Qiang is seen as close to Xi after they worked together in Zhejiang province in the southeast in the early 2000s.

Li Keqiang was sidelined over the past decade by Xi, who put himself in charge of policymaking bodies. Li Keqiang was excluded Saturday from the list of the party’s new 205-member Central Committee, from which the Standing Committee is picked.

Another departure from the Standing Committee was Wang Yang, a reform advocate suggested by some as a possible premier. Wang, 67, is below retirement age.

Other new Standing Committee members include Cai Qi, the Beijing party secretary, and Ding Xuexiang, a career party functionary who is regarded as Xi’s “alter ego” or chief of staff. Wang Huning, a former law school dean who is chief of ideology, stayed on the committee. The No. 7 member is Li Xi, the party secretary of Guangdong province in the southeast, the center of China’s export-oriented manufacturing industry.

The Central Committee has 11 women, or 5% of the total. Its 24-member Politburo, which has had only four female members since the 1990s, has none following the departure of Vice Premier Sun Chunlan.

Party plans call for creating a prosperous society by mid-century and restoring China to its historic role as a political, economic and cultural leader.

Those ambitions face challenges from security-related curbs on access to Western technology, an aging workforce, and tensions with Washington, Europe and Asian neighbors over trade, security, human rights and territorial disputes.

Xi has called for the “great rejuvenation of the Chinese nation” and a revival of the party’s “original mission” as social, economic and culture leader in a throwback to what he sees as a golden age after it took power in 1949.

During the congress, Xi called for faster military development, “self-reliance and strength” in technology and defense of China’s interests abroad, which raises the likelihood of further conflict.

The party has tightened control over entrepreneurs who generate jobs and wealth, prompting warnings that rolling back market-oriented reforms will weigh on economic growth that sank to 2.2% in the first half of this year — less than half the official 5.5% target.

“Clearly, it’s a return to a much more state-controlled type of economy,” said Cabestan. “This means, for private business, they will be on an even shorter leash, with party committees everywhere.”

Under a revived 1950s propaganda slogan, “common prosperity,” Xi is pressing entrepreneurs to help narrow China's wealth gap by raising wages and paying for rural job creation and other initiatives.

Xi, in a report to the congress last week, called for “regulating the mechanism of wealth accumulation,” suggesting entrepreneurs might face still more political pressure, but gave no details.

“I would worry if I were a very wealthy individual in China,” said economist Alicia Garcia Herrero of Natixis.

In his report, Xi stressed the importance of national security and control over China’s supplies of food, energy and industrial goods. He gave no indication of possible changes in policies that prompted then-President Donald Trump to launch a tariff war with Beijing in 2018 over its technology ambitions.

The party is trying to nurture Chinese creators of renewable energy, electric car, computer chip, aerospace and other technologies. Its trading partners complain Beijing improperly subsidizes and shields its suppliers from competition.

The party has tightened control over private sector leaders, including e-commerce giant Alibaba Group. Under political pressure, they are diverting billions of dollars into chip development and other party initiatives. Their share prices on foreign exchanges have plunged due to uncertainty about their future.

The party will “step up its industrial policy” to close the “wide gap” between what Chinese tech suppliers can make and what is needed by smartphone, computer and other manufacturers, said Garcia Herrero and Gary Ng of Natixis in a report.

Abroad, Chinese efforts to assert leadership will lead to “more tension and difficulty,” because “countries are not just going to follow the Chinese model,” said Steve Tsang, director of the University of London’s China Institute.

With potential dissenters forced out, “there is nobody in Beijing who can advise Xi Jinping that this is not the way to go,” Tsang said.

Xi gave no indication Beijing will change its “zero-COVID” strategy despite public frustration with repeated city closures that has boiled over into protests in Shanghai and other areas.

Xi’s priorities of security and self-sufficiency will “drag on China’s productivity growth,” said Julian Evans-Pritchard, Sheana Yue and Mark Williams of Capital Economics in a report. “His determination to stay in power makes a course correction unlikely.”

Xi suspended retirement rules to keep Gen. Zhang Youxia, 72, on the Central Committee. That allows Zhang, a veteran of China’s 1979 war with Vietnam, to stay as Xi’s deputy chairman on the commission that controls the party's military wing, the People's Liberation Army.

The party elite agreed in the 1990s to limit the general secretary to two five-year terms in hopes of avoiding a repeat of power struggles in previous decades. That leader also becomes chairman of the military commission and takes the ceremonial title of president.

Xi has led an anti-corruption crackdown that snared thousands of officials, including a retired Standing Committee member and deputy Cabinet ministers. That broke up party factions and weakened potential challengers.

Xi is on track to become the first leader in a generation to pick his own successor but has yet to indicate possible candidates. Hu Jintao and his predecessor, Jiang Zemin, both were picked in the 1980s by then-supreme leader Deng Xiaoping.

Ahead of the congress, banners criticizing Xi and “zero COVID” were hung above a major Beijing thoroughfare in a rare protest. Photos of the event were deleted from social media. The popular WeChat messaging app shut down accounts that forwarded them.

Xi’s government also faces criticism over mass detentions and other abuses against mostly Muslim ethnic groups and the jailing of government critics.