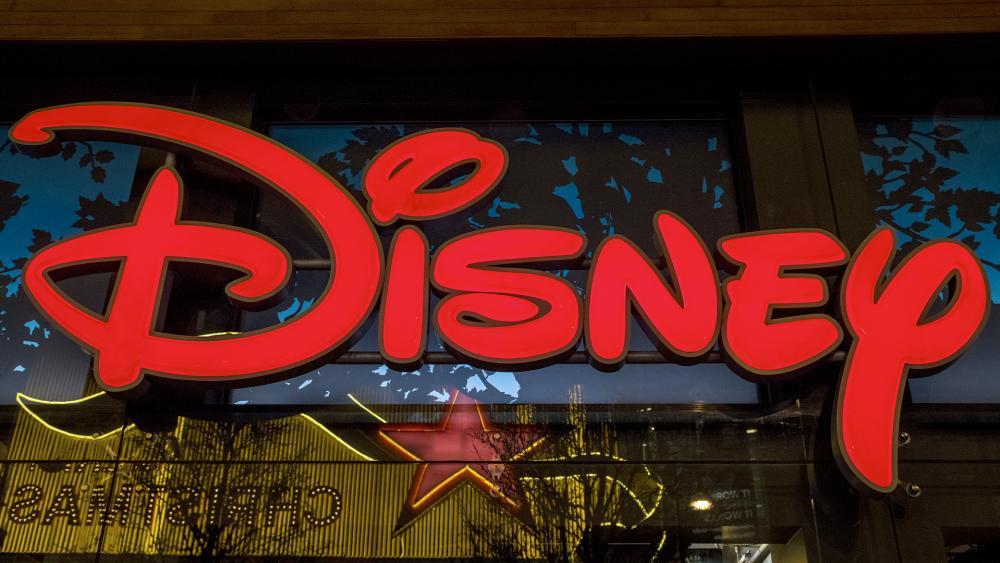 In a leaked video from a recent staff meeting concerning Florida Gov. Ron DeSantis' signing of the Parental Rights in Education bill into law, an executive producer at the Walt Disney Company claims the company's leadership has been welcoming to her "not-at-all-secret" gay agenda.

The video was obtained and posted to social media by journalist Christopher F. Rufo. In the clip, Latoya Raveneau, an executive producer with Walt Disney animation, recalls how she "didn't have to be afraid to like, let's have these two characters kiss in the background. I was just, wherever I could, just basically adding queerness. If you see anything queer in the show, no one would stop me, and no one was trying to stop me."

SCOOP: I've obtained video from inside Disney's all-hands meeting about the Florida parental rights bill, in which executive producer Latoya Raveneau says her team has implemented a "not-at-all-secret gay agenda" and is regularly "adding queerness" to children's programming. pic.twitter.com/eJnZMpKIXT

Raveneau is the executive producer of the upcoming Disney Junior musical series, Rise Up, Sing Out, featuring the music of The Roots, according to her LinkedIn profile. She is also directing the Disney+ animated series The Proud Family: Louder and Prouder.

Other videos posted by Rufo reveal something that many parents of young children have come to realize over the last couple of years – Disney corporate leadership is dedicated to promoting the LGBTQ+ agenda.

"SCOOP: Disney corporate president Karey Burke says, 'as the mother (of) one transgender child and one pansexual child,' she supports having 'many, many, many LGBTQIA characters in our stories' and wants a minimum of 50 percent of characters to be LGBTQIA and racial minorities," Rufo tweeted.

SCOOP: Disney corporate president Karey Burke says, "as the mother of one transgender child and one pansexual child," she supports having "many, many, many LGBTQIA characters in our stories" and wants a minimum of 50 percent of characters to be LGBTQIA and racial minorities. pic.twitter.com/oFRUiuu9JG

In a third video tweeted by Rufo, Disney Diversity and Inclusion Manager Vivian Ware tells staffers the company "removed all of the gendered greetings in relationship to our live spiels. So we no longer say 'Ladies and gentlemen, boys and girls.' We've trained, we provided training for all of our cast members in relationship to that. So now they know it's 'Hello everyone or Hello friends.'"

SCOOP: Disney diversity and inclusion manager Vivian Ware says the company has eliminated all mentions of "ladies," "gentlemen," "boys," and "girls" in its theme parks in order to create "that magical moment" for children who do not identify with traditional gender roles. pic.twitter.com/OWsGTUoeCA

CBN News has reached out to the Walt Disney Company for comment. We'll post it here if they reply.

As CBN News has reported, Florida's Parental Rights in Education bill says schools can't teach curriculum on sexual orientation and gender identity to very young children from kindergarten to third grade. It does not ban the word "gay" from classrooms, even in casual discussions on either topic. Leftist groups and biased media outlets have mischaracterized the measure, calling it the "Don't Say Gay" bill.

Gov. DeSantis signed the bill into law Monday. The move prompted an official response from Disney which also mislabeled the parental rights bill.

Earlier this month, while speaking at an event, DeSantis slammed Disney, saying, "In Florida, our policies have got to be based on the best interest of Florida citizens, not on the musing of woke corporations."

"When you have companies that have made a fortune off being family-friendly and catering to families and young kids, they should understand that parents of young kids do not want this injected into their kid's kindergarten classroom," DeSantis said in a video obtained by Fox News. "They do not want their first graders to go and be told that they can choose an opposite gender. That is not appropriate for those kids. So if you're family-friendly understand, the parents who are actually raising families want to have their rights respected."

"And I also think that if you have companies like a Disney that are going to say and criticize parents' rights, they're going to criticize the fact that we don't want transgenderism in kindergarten and first-grade classrooms. If that's the hill they're going to die on, then how do they possibly explain lining their pockets with their relationship from the Communist Party of China?" DeSantis continued. "Because that's what they do and they make a fortune. They don't say a word about the really brutal practices that you see over there at the hands of the CCP."

As CBN News has reported, Disney executives reportedly announced during a staff meeting that the company is also planning to fight the state of Texas over its order to investigate transgender medical procedures on children as child abuse.

In an exclusive story, The Daily Wire reported Disney's Chief Human Resources Officer, Paul Richardson, announced the company is planning to "take action" against Texas Republican Gov. Greg Abbott's order to the state's Department of Family and Protective Services to investigate those performing some sex-change surgeries or puberty-blocking efforts on children who are too young to understand the lifelong consequences of these procedures.

"Because of our presence in Texas," Richardson reportedly said, "we want you to know that we've signed on to the Human Rights Campaign's letter opposing the Texas bill that criminalizes parents who provide for their transgender children gender-affirming care."

Disney's Pixar studio also announced that it will include a same-sex kiss in the upcoming animated film Lightyear amid the demands from the gay community over the Florida law.

The movie, which is scheduled to debut on June 17, will feature the kissing moment between two female characters who are in a relationship, Variety reports.

In a recent memo to staff, Disney CEO Bob Chapek reassured his employees that Disney stands behind members of the gay community.

"I want to be crystal clear: I and the entire leadership team unequivocally stand in support of our LGBTQ+ employees, their families, and their communities," the memo says. "And, we are committed to creating a more inclusive company — and world."

A report last summer by The Insider revealed LGBTQ producers are actively working behind the scenes across multiple organizations in children's programming to push LGBTQ characters and storylines in cartoons to target young eyes and minds with their agenda.

Transgender and nonbinary characters are increasingly being represented within animated kids' shows, the outlet reported. As of July 2021, the website found 259 LGBTQ characters in children's animation, or 5% when compared to straight characters who make up 49%.

Meanwhile, one Floridian told Fox News how her family is responding to Disney's "extreme changes."

"We've been going to Disney for a long time, and we are tired of the extreme changes that they seem to think are pleasing everyone," said Marsha from Winter Garden, Florida. "When our annual passes expired in February, we did not renew them because of our displeasure with the way Disney has gone overall, not just on the particular issue, but on all their wokeness."

"Walt would be rolling over in his grave," she added. 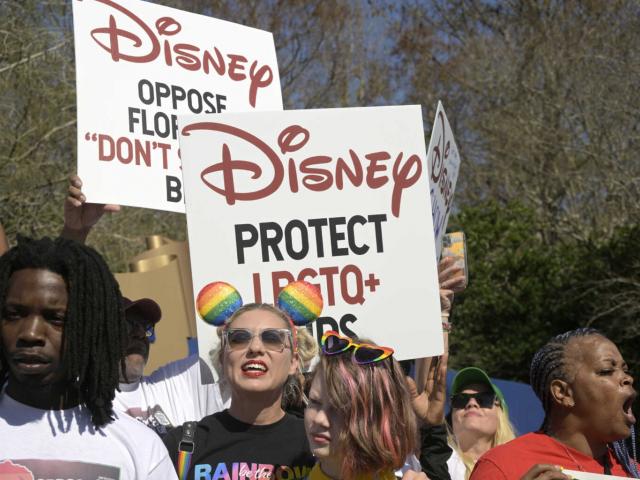 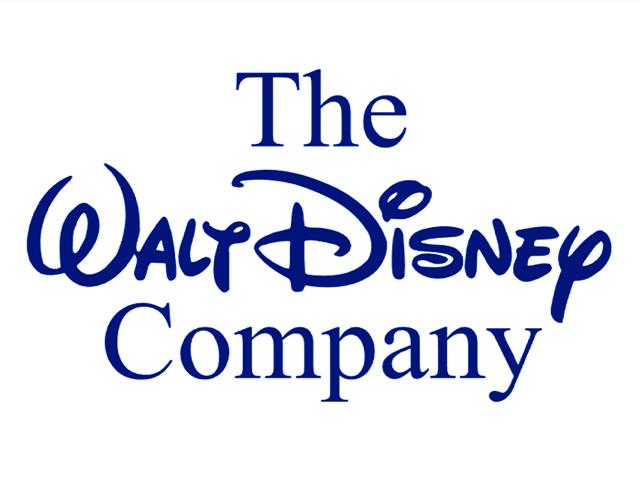 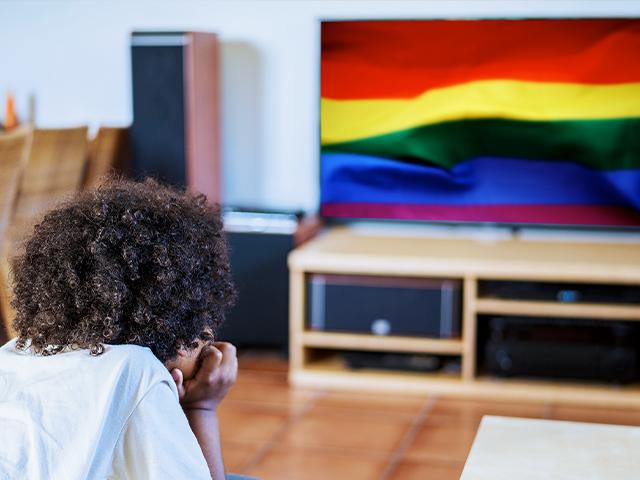