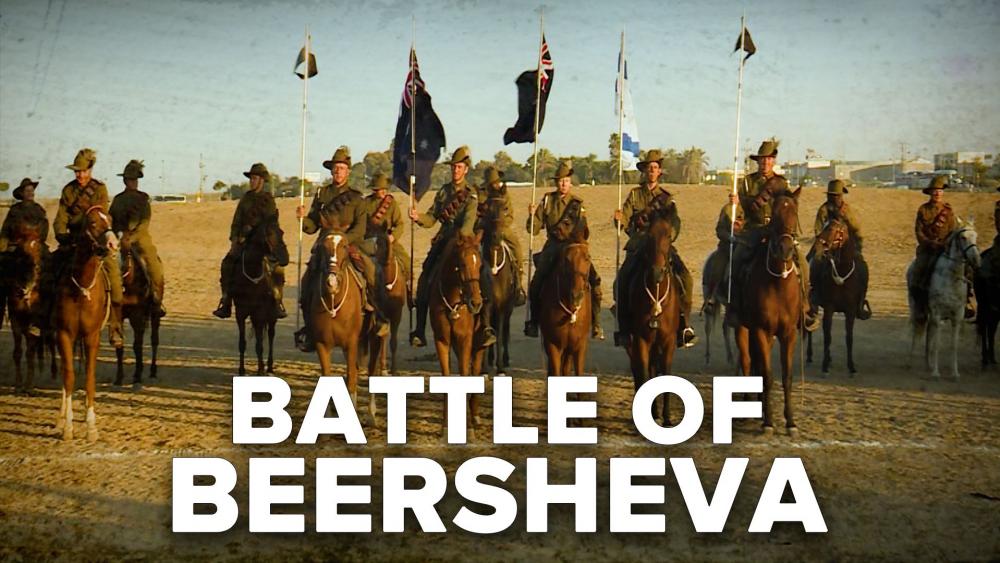 Millions of people around the world have been forced into isolation as part of the global effort to stop the deadly coronavirus pandemic. Since no tourists are allowed in Israel during this time, CBN News is bringing Israel to you.

We are inviting you to join our virtual tour series and see Israel's most fascinating sites from the comfort of your own home. Ride with us on the Sea of Galilee, walk the ancient pilgrimage road to that Jesus once walked, and visit ancient Shiloh.

This virtual tour page features archaeological sites and history from the time of Jesus and before.

The coronavirus can't stop this incredible journey. Watch the Bible come alive with us. Come back here every day to see a new story added to this tour page.

Today's Virtual Tour Story: Will take you to the Israeli city of Beersheva where more than a hundred years ago, an epic World War I battle took place that set the stage for the re-establishment of the Jewish State.

Each year, Israeli archaeologists dig up thousands of artifacts – but where do they go after scientists study them?

Take a look at an ancient church that may mark the burial site of the prophet Zechariah.

Israeli archaeologists may have discovered the tombs of ancient Jewish heroes known as the Maccabees.  They say a Byzantine Christian gravesite may hold the key.

A few years ago, Israeli archeologists uncovered an impressive church dating from early Christianity not far from Jerusalem.  Thousands of youth from around Israel helped to excavate this well-preserved find.

A few years ago, Israeli archeologists announced the discovery of an ancient street in Old Jerusalem.

Israeli archaeologists discovered an 1800-year-old bathing pool most likely used by the 10th Roman Legion. Soldiers from that legion destroyed the Jewish temple in 70 AD just decades after the death and resurrection of Jesus.

Israeli archaeologists believe they’ve found evidence that King Hezekiah destroyed the high places and idols in the land of Israel. The artifacts back up the historical record described in the bible.

A major archaeological discovery in Israel raised the question of how to preserve the past without stopping progress towards the future.

Archaeologists say they have uncovered a Philistine cemetery and bones from that cemetery gave modern science some first-time-ever clues about the origins and history of that ancient people who were one of the key enemies of the Israelites in the Bible.

A number of years ago, archaeologists digging in Goliath’s ancient hometown of Gath uncovered an altar used in biblical times.  They learned a lot about the Philistines and their culture.

Was King David man or myth?  That's the question Israeli archeologists are answering with new archeological finds.  They believe they have uncovered the remains of a palace of King David.

Was the Bible’s King David man or myth? That’s the question Israeli archaeologists are answering with archaeological finds.  Their discoveries also shed light on how the first Jewish temple was built.

It’s known as an “ostracon.”  No, it’s not something out of science fiction.  It is a piece of history from the time of King David and this Hebrew inscription may shed light on biblical history.

Today we visit the Palestinian city of Nablus, where the biblical site of Shechem is located.

Did you ever wonder where honey in the bible came from?  We’re heading to the Jordan Valley where archaeologists found evidence of ancient hives from the time of the Prophet Elisha.

Technology is helping Israeli archaeologists unravel more mysteries than ever.  Here’s an example where it helped scientists reveal the secrets of charred remains of a scroll uncovered more than four decades ago.

Today our tour is in Jerusalem, where archaeologists discovered a large stone linked to the Romans' destruction of Jerusalem.

We’re headed to northern Israel where archaeologists uncovered part of a rare Egyptian sphinx and we’ll hear how experts believe it ended up there.

Several years ago, Jerusalem's Israel Museum unveiled the world's first exhibit on the life and legacy of King Herod the Great.  While the exhibit is no longer at the museum, our CBN News story here shows it included artifacts never before seen and shows why Herod is known as history’s greatest builder.

Today we show you a first-century quarry uncovered a few years ago by Israeli archaeologists. Experts say it's likely that King Herod's men pulled giant stones from the location to build ancient Jerusalem.

Recently we showed the progress that’s been made on the pilgrim’s path up to the Temple Mount in the City of David from the time of Jesus.  Today, we want to show you how the excavation looked in the beginning.

Not long ago, Israeli archaeologists uncovered a unique link between the Jerusalem of 2,000-years-ago and the city of today.  It comes in the form of the oldest inscription ever found of the modern Hebrew spelling and the pronunciation of “Jerusalem.”

Today we introduce you to one family that discovered an important treasure from the time of Jesus under their living room floor.

Each summer, volunteers come to Israel to help archaeologists unearth biblical treasures.  Take a look at one site that was excavated on the outskirts of Jerusalem and see what they found.

Today we take you to Nazareth where Israeli archeologists have uncovered a house from the time of Jesus.

Today we wrap up our visit to Magdala and see how the excavation there peeled back the layers to reveal the synagogue from the time of Jesus.

Since its discovery, CBN News has tracked the story of one of the most important archeological discoveries in years, the synagogue at the home of Mary Magdalene, Migdal.  Here’s our first story on this find in 2009.

Today we show you a 2,000-year-old synagogue where Jesus may have prayed.

Archaeologists believe they have found the biblical location where David hid from King Saul.  Take a look at the Philistine town known as Ziklag.

Israeli archaeologists uncovered a Jewish suburb of Jerusalem from around the time of Jesus in an Arab neighborhood as part of a salvage excavation.  the community likely interacted with pilgrims and provided goods for the Second Temple.

Archaeologists in Jerusalem’s Old City have uncovered a rare find.  As Julie Stahl reports it goes all the way back to the time of the first Jewish temple.

Today we’re going to take you the Ophel just outside the Temple Mount to walls that were built in king Solomon’s time to protect Jerusalem.

Several years ago, the Hebrew University recently announced one of its most significant archeological finds in years.  It's a discovery that affirms the biblical record and the life of one of Israel’s most famous kings.

New discoveries by  Israeli archaeologists are showing us what the Temple Mount was like during the time of Jesus.

Today we’re going underneath the Western Wall to an area that was hidden for nearly 2,000 years to take a look at what archaeologists found there.

In 1999, the Islamic group responsible for the Temple Mount began construction on a large underground mosque.  During construction, they dumped tons of debris into the Kidron Valley.  Here’s a look at what happened to that debris and the treasures that were found there.

Today we take you to the City of David where an Israeli archeologist has uncovered the remains of an altar dating back to Genesis.  It's believed to be from around the time Abraham met the high priest Melchizedek in Jerusalem.

Ancient Jerusalem is often thought of as a man’s world but the discovery of a seal bearing woman’s name in the City of David indicates that some women, had status, too.

About ten years ago, Israeli archaeologists in Jerusalem discovered a rare gold bell believed to be part of a priestly garment in the time of Jesus.  It’s one of the most significant finds here in the city.

The City of David holds one of the most important archaeological finds in recent months. Researchers uncovered the very path Jesus himself walked on as he and other Jews made their way to the temple in ancient Jerusalem.

Archaeologists believe they have found a tiny remnant from the time of King David in ancient Jerusalem.

Archeologists in Israel recently announced one of the most important discoveries in years. It answers a perplexing question about the ancient city of Jerusalem.

Our journey continues in Jerusalem with a search for the ark of the covenant legends have placed the ark in faraway places like Ethiopia or Ireland. CBN spoke with one researcher who believes the ark might be a lot closer than people think.

To find our other virtual tours in this series, click on one of these links below:

Visit Israel from Your Home: Join CBN's Virtual Tour Through Judea and Samaria

Visit Israel from Your Home: Join CBN's Virtual Tour Through the Six-Day War