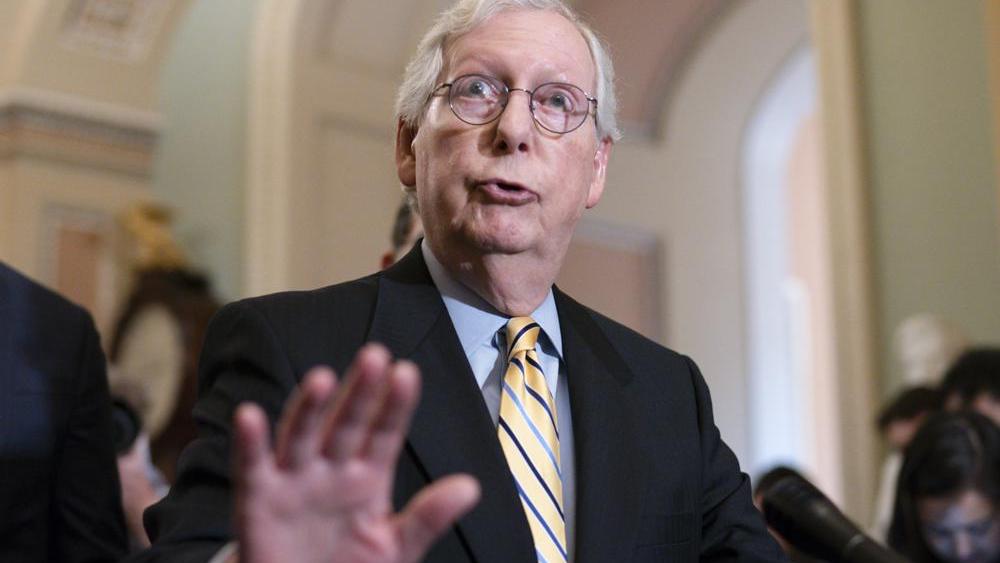 Both sides voted along party lines in the evenly divided Senate, denying Democrats the 60 votes needed to begin debate under Senate rules.

Vice President Kamala Harris presided over the chamber as the bill failed to break past that filibuster barrier. It was the same procedure used by Democrats to block legislation during Donald Trump's presidency.

The vote leaves the Democrats with no clear path forward on the measure, even though President Joe Biden declared, "This fight is far from over." Where the fight goes from here is anybody's guess since the Democrats don't appear to have many options.

"Once again, the Senate Republican minority has launched a partisan blockade of a pressing issue," Senate Majority Leader Chuck Schumer (D-NY) said from the chamber floor. He vowed that the vote was the "starting gun" and not the last time the bill would be up for debate.

Democrats have framed the bill known as House Resolution 1 (H.R. 1) or "For the People Act" as a "voting rights" bill, but it goes farther than that. It would have completely overhauled federal voting laws, creating a nationalized voting system, requiring uniform rules for all states. For example, it would mandate early voting and same-day registration, outlaw voter ID requirements, and allow ballot harvesting.

Republicans called the bill a Democrat power grab. Democrats charged that the federal government should set nationwide standards as GOP-led legislatures in states across the country enact voter reform laws.

"It's a recipe for undermining confidence in our elections and remaking our entire system of government to satisfy one far end of the political spectrum," Senate Minority Leader Mitch McConnell (R-KY) said of the bill on the Senate floor before the vote.

And, more pointedly, Sen. Shelley Moore Capito (R-WV) called the bill "a despicable, disingenuous attempt to strip states of their constitutional right to administer elections" that "should never come close to reaching the president's desk."

Left-wing Democrats are still demanding their leaders try to get rid of the filibuster rule so they can move ahead with their agenda.

Although the White House has characterized the issue as "the fight of his presidency," Biden has prioritized his economic initiatives, measures more likely to win Republican support in the Senate. And he's shown little interest thus far in diving into a messy debate over changing Senate rules to pass the legislation on Democratic votes alone.

"When it comes to our elections, policymakers should be focused on one goal: making it easier to vote and harder to cheat," The Heritage Foundation's Hans von Spakovsky, who was once a commissioner on the Federal Election Commission which enforces laws on federal campaigns, said in a statement.

"Sadly, this legislation does the opposite. In reality, this mammoth, leftist takeover of elections threatens election security and compromises every American's fundamental right to vote," he said.

"It would require nationwide implementation of the worst changes in election rules from the 2020 election, and go even further in eroding and eliminating basic security protocols that states have in place," von Spakovsky continued.

Last week, former Secretary of State Mike Pompeo warned about H.R.1's numerous problems. In an article published on the American Center for Law and Justice's (ACLJ) website, he pointed to how it would "strip individual states of their ability to manage their own voting laws and practices and instead give this responsibility to the federal government."