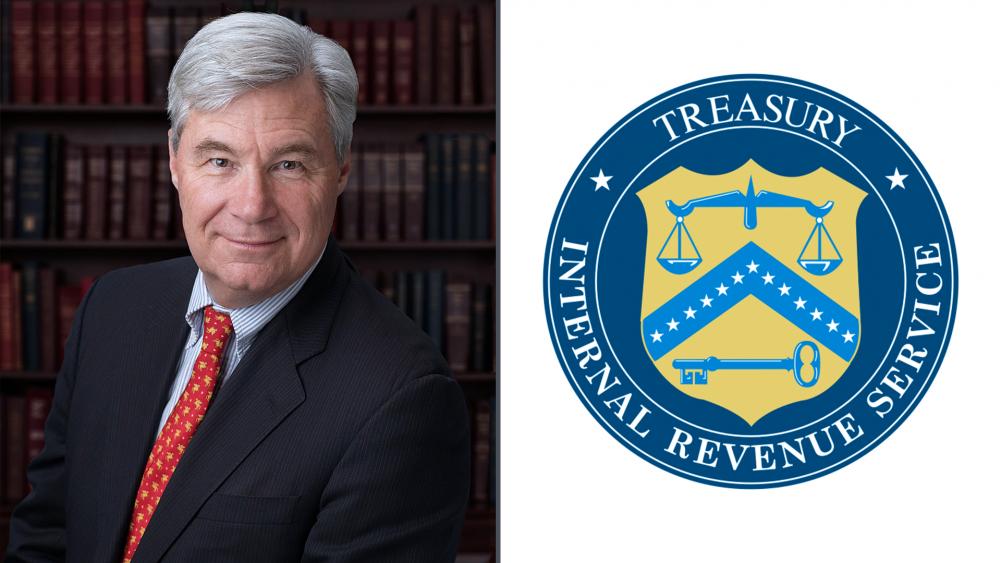 Documents obtained by a conservative watchdog reveal that U.S. Sen. Sheldon Whitehouse (D-RI), the chairman of the Senate Subcommittee on Taxation and IRS Oversight, wanted to deny a tax exemption for a conservative group for not masking up and socially distancing during the pandemic, demanded investigations into other conservative organizations, and urged the Internal Revenue Service to do even more.

In an exclusive report, The Daily Signal, the media arm of The Heritage Foundation, reports a total of 176 pages of correspondence from and to the Rhode Island senator obtained from the IRS by the conservative watchdog group American Accountability Foundation through the Freedom of Information Act.

"It's abundantly clear that {Whitehouse} is trying to take the 87,000 new IRS agents and put them to work investigating me and my friends because he doesn't like their politics," Tom Jones, president and founder of the American Accountability Foundation (AAF), told The Daily Signal.

"Tax-exempt status provides a substantial benefit to charitable organizations and reflects the federal government's endorsement of an organization's activities," Whitehouse wrote to the IRS chief. "Organizations that knowingly put in danger minors entrusted to their care should not enjoy the benefits of tax-exempt status. Accordingly, I urge the IRS to review whether it should revoke Turning Point USA's tax-exempt status."

The Daily Signal noted in its report that many of the documents provided by the IRS to the AAF were heavily redacted, but pointed out that Whitehouse's letter about Turning Point USA appears on the senator's own website.

Rettig responded to Whitehouse in a letter dated March 28, 2021. It says that the IRS wouldn't tell the senator if it was investigating or acting against Turning Point USA.

"You shared your concern about reports that the organization hosted COVID-19 super-spreader events in violation of local regulations," Rettig wrote the Rhode Island senator. "You urged the IRS to review and consider whether we should revoke its tax-exempt status."

"Section 6103 of the Internal Revenue Code protects the privacy of tax returns and tax return information of all taxpayers. Therefore, we cannot disclose any actions we may or may not take on this information," Rettig's letter said.

Rettig responded favorably to the senators about the new funding for his agency on Aug. 27, 2021, writing, "Adding substantial multi-year mandatory funding, however, provides an opportunity to greatly improve federal tax administration for all Americans. The gross revenue collected by the IRS is approximately $3.5 trillion per year, representing around 96% of the gross revenue of the United States."

Jones told The Daily Signal that Whitehouse's demand to target conservatives is like "Lois Lerner on steroids."

"The Lois Lerner stuff was a mid-level bureaucrat abusing {her} power to investigate conservative groups," he said. "This is a U.S. senator basically trying to turn the heat up on investigations by the Internal Revenue Service."

Meanwhile, conservatives are also sounding an alarm over the new Respect for Marriage Act passed by the U.S. Senate on Tuesday, wondering if the measure would allow the government to empower the IRS to go after religious and faith-based institutions.

As CBN News has reported, while the measure doesn't force churches to perform or host same-sex ceremonies, religious freedom advocates say it will allow the targeting of faith-based organizations and individuals who decline to serve LGBTQ couples due to their religious convictions.

Even though the revised bill promises not to alter the tax-exempt status of organizations following their religious beliefs, some critics said the bill was unnecessary and opens a door for new legal attacks on people whose religious beliefs teach traditional marriage.

Sen. Mike Lee (R-UT) had been pushing for more religious liberty protections and even proposed his own amendment. He called the Democrat-sponsored amendment "insufficient" and argued churches and charities would be subjected to endless litigation under the so-called Respect for Marriage Act, something other critics of the bill have echoed.

Greg Baylor, senior counsel with Alliance Defending Freedom, had pushed for Lee's amendment, saying, "It would actually restrain the federal government from taking adverse action against organizations that hold traditional views about marriage."

In a statement, Jason Yates, CEO of My Faith Votes, warned the bill is a "sinister trick" against any American who disagrees with same-sex marriage and that any religious institution could now be legally targeted by the government.

"Make no mistake, when the so-called Respect for Marriage Act (RFMA) is signed into law it will grant no new rights to LGBTQ individuals. Instead, it is a sinister trick designed to intimidate, silence, and shut out of the public square any American who disagrees with same-sex marriage on the basis of sincerely held religious beliefs. Religious freedom, a cornerstone of our republic, will face serious threats," the statement said.

"Religious institutions like churches, Christian colleges, faith-based nonprofit organizations, and Christian small businesses will undoubtedly face unending lawsuits and government harassment like IRS investigations for adhering to a biblical worldview. Perhaps this is why the Biden administration is amassing a small army of 87,000 new IRS agents," the statement concluded.