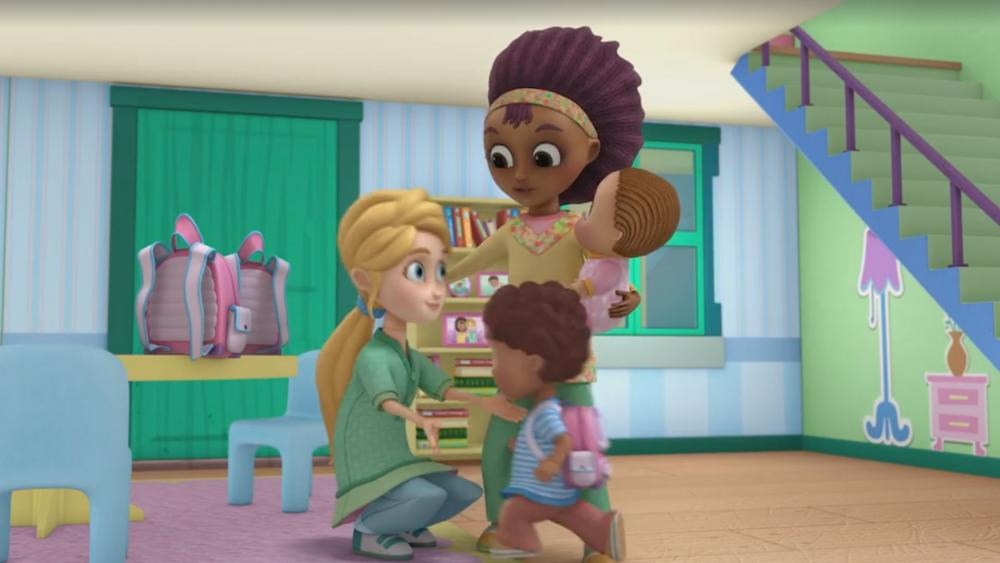 Doc McStuffins Facebook
In a first for Disney Junior, a recent episode of the TV network's animated children's program "Doc McStuffins" featured lesbian moms as the heads of one household.
The show, now in its fourth season, is geared toward children ages 2 to 5, according to Common Sense Media.
"Doc McStuffins" is a very popular show and has gotten the support of a variety of audiences with different backgrounds. The lead character is a black girl named "Doc" who helps sick stuffed animals get better.
The episode entitled "The Emergency Plan" aired on the Disney Channel last weekend. It showed two doll moms who are a couple, played by well-known lesbian Wanda Sykes and Portia de Rossi.
The two moms are caught unprepared when a toy dragon causes an earthquake by jumping up and down. The family gets separated and Doc helps to reunite them and shows them how to make emergency kits.
The activist group One Million Moms says showcasing a same-sex couple in the animated series, should not come as a surprise, pointing out that the show's creator and executive producer, Chris Nee, is an out and proud lesbian.
In an online interview with After Ellen, a lesbian oriented website, Nee explained her desire to instill subtle messages about sexual orientation into the storyline:
AE: "Even though this is a kid's show and we're not going to see gay storylines but how do you instill subtle messages about acceptance and how people are different? Is that always in the back of your head when doing these shows?"
Chris Nee: "Definitely. My son has two moms and it's a huge part of my life as a human being and it's been an incredible part of the way that I see the world and the way I see characters and the way I want to create characters who are incredibly accepting of each other and whatever is happening in their life."
"I think that I work very hard on creating the family of friends. I like to create a world that's a world of friends who are just extraordinary at supporting each other in whatever they're doing — my own biological family is an amazing family but I think that classic story of gay kids is that you end up creating that family of friends and that's always reflected in my work."
LGBT activists are applauding Disney for the move.
"Children like mine deserve the chance to see their families reflected on TV, and this episode does just that in a beautiful and positive way," said Sarah Kate Ellis, president and CEO of GLAAD.
Meanwhile, One Million Moms called for a boycott of the show saying, "Conservative families will have no choice but to no longer watch Disney Channel Network in their homes so they can avoid previews, commercials, and reruns. Families will not be able to allow Disney Channel in their homes, if the network veers away from family-friendly entertainment."
Gay activism in children's programming isn't new for Disney. The entertainment company faced a big backlash for working a subtle "gay moment" into its live action version of "Beauty and the Beast" earlier this year.
And just before that, Disney aired its first on-screen gay kiss on a children's cartoon show, "Star vs. the Forces of Evil."
The producers of that show decided to show several same-sex couples kissing during a concert scene while a band sang the song "Best Friends."