'He Threw His Arms Around Me': Why Jim Bakker Says He Just Had to Attend Billy Graham's Funeral 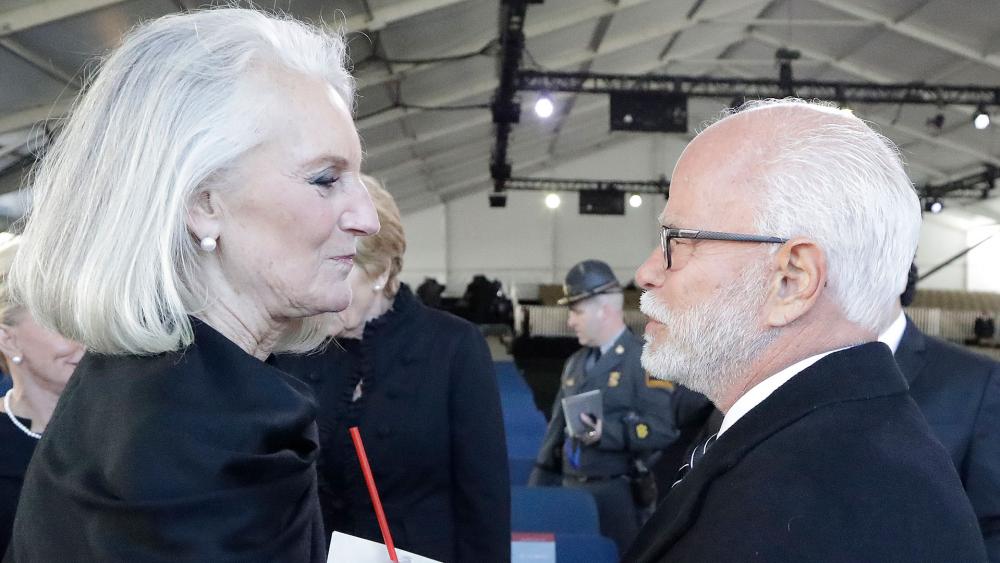 Evangelist Billy Graham touched countless millions of lives with God's message of forgiveness during his 99 years on earth.

Now a Christian TV pioneer whose public disgrace once rocked the Christian world is opening up about the way Graham brought healing to his soul at the lowest point in his life.

Jim Bakker, the former host of The PTL Club (Praise the Lord), later called The Jim and Tammy Show, was one of many who attended Graham's recent funeral.

More than 30 years later, Bakker is back on television, hosting his own show called, The Jim Bakker Show, where he recently honored Graham's legacy.

"I'm so thankful for what Billy's done for the world," said Bakker.

Bakker then shared how God used the evangelist to reach him during his darkest moment in prison.

"When I was in that prison, the lowest day probably up to that moment in the prison, I was sick," said Bakker.  "I had pneumonia. I never once laid in my bunk in my cell and did not do my job. I cleaned toilets for five years. Every day. I would not lay in the bed, even though I felt like I was dying."

"That morning I cleaned my toilets," he said. "I had my shoes that had holes in the toes. They were my toilet shoes."

He shared, "I had on my old clothes. I had on my wrinkled, toilet cleaning clothes, not my visiting my family clothes. There's two different sets of clothes you had."

"My hair was disheveled," she said. "My clothes were disheveled. I was sick with pneumonia. I looked like a man that had been sleeping under a bridge for years. So I walked over to the warden's office across the prison yard and I stood out there."

The former televangelist continued, "Somebody came out of the office and they said, 'Bakker you have a visitor.' I said, 'It's not visiting day, who's here?' He says, 'Has nobody told you? Billy Graham is here.' He said, 'Do you want to see him?' I looked down at my shoes with my toes hanging out and my wrinkled clothes and I was sick. I looked bad. And I thought oh, the last time I saw Billy he was on my show."

"The last time I had been with Billy Graham I was on TV with the who's who of the world," explained Bakker. "I thought, awe I don't want him to see me looking like this. But he came so I had to go out."

"I walked into the room and the warden was there, assistant wardens. Everybody wanted to see Billy Graham. But when I walked in all I could see is this six foot something man and I'm a five foot something guy. And I walked in. He threw his arms around me," Baker said tearfully. "And he held me and he said, 'Jim I love you.'"

"How could anybody love me looking like that? I had been disgraced to the world. And a man who on the radio a day before I heard, this is what I heard: 'Billy Graham voted as one of the top three most respected men in the world.' And here he is in my prison. Holding me in his arms. Telling me that he loved me. And I didn't feel loved very much anymore."

Bakker became emotional as he told the story, remembering that profound feeling of love and forgiveness and how it changed his life.

"And that's why I just want to put flowers on his grave," said Bakker.

Bakker isn't the only prisoner Billy Graham visited. In fact, his casket was made by prisoners who received the gospel from him while serving time in Angola prison. More about that story here: Billy Graham's Profound 'Final Statement': Meet the Inmate Who Crafted His Casket

Billy Graham's Last Crusade: 'The Greatest Tribute...Is to Do What Billy Did'
CBN News Email Updates