VIRAL VIDEO: Freedom March Co-Founder Belts Out 'Nothing But the Blood of Jesus' Inside the Capitol 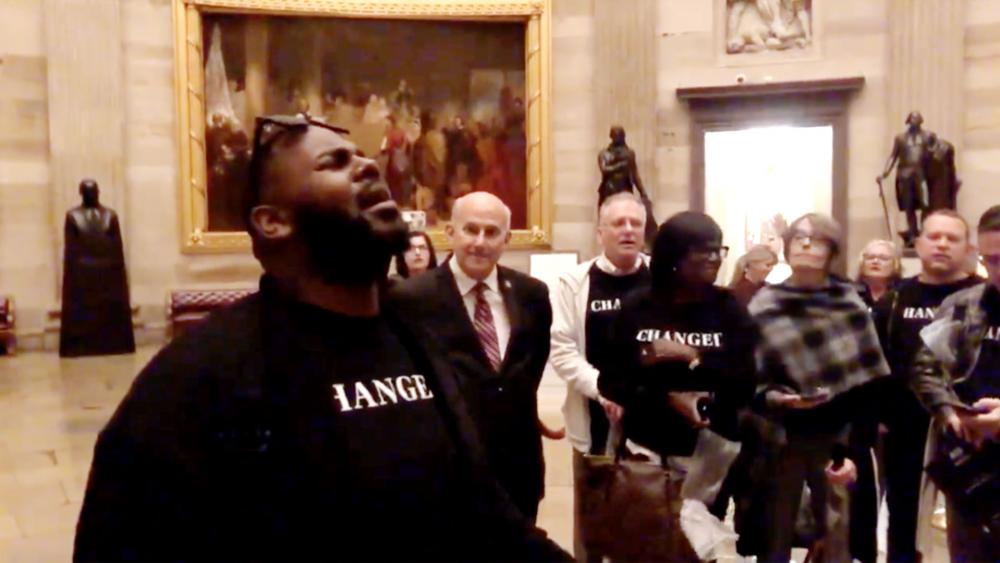 A video of Freedom March co-founder and worship leader Edward Byrd belting out a beloved hymn inside the US Capitol recently is going viral on social media.

At press time, the clip of Byrd, who once identified as gay but has since chosen a different path, had more than 1.5 million views and over 60,000 shares. Standing alongside his fellow Changed Movement members last Wednesday, Byrd’s voice echoed throughout the Capitol Rotunda as he sang “Nothing But the Blood of Jesus,” a hymn penned by 19th-century preacher Robert Lowry.

“I have a personal relationship with that song,” Byrd told Faithwire. “When I first came out of the lifestyle of homosexuality, and things really became hard for me, as far as transitioning out of my old life and into my new life, the Lord spoke very clearly to me, ‘There’s power in the blood of Jesus.’”

The Changed Movement is a faith-based advocacy organization offering support to those who once identified themselves as members of the LGBTQ community but have since abandoned the lifestyle to pursue faith in Jesus.

According to CBN News, a group of Changed Movement members traveled to Washington, DC, last week to speak with lawmakers about H.R. 5, or the Equality Act, which could pose a threat to Christian business owners opposed to providing services for same-sex weddings and celebrations. They also spoke about concerns regarding H.R. 3570, also known as the Therapeutic Fraud Prevention Act, which would prohibit so-called conversion therapy for those opposed to their struggle with same-sex attraction.

Byrd sang the rousing hymn while Rep. Louie Gohmert (R-Texas) was giving the Changed Movement members a tour of the U.S. Capitol. The lawmaker could be seen singing along with the worship leader at certain points.

The recording artist said there were several “holy moments” during the group’s tour with Gohmert, adding he kept feeling God placing Lowry’s hymn on his mind. And when they entered the Rotunda, his group’s leader asked Byrd to sing a worship song.

Speaking to Charisma earlier this year, Byrd opened up about his past, revealing years of sexual and physical abuse at the hands of a close family member, which set the trajectory for his life. But a few years ago, he chose to walk away from his gay lifestyle when a woman approached him in a night club and began praying over him. She told Byrd there is “a light inside of you” and “God has a purpose and a plan for you.”

As for his trip to Washington, DC, last week, Byrd described his time in the nation’s capital as empowering and encouraging. He said he hopes the viral moment — as well as the conversations he and others had with lawmakers on Capitol Hill — “points back to Jesus.”

“It’s so important for people with my testimony or people with my life experience to sit down with these people and say, ‘Hey, I know that you’re making laws based on this narrative, but there’s a whole other group of people that you’re excluding,’” he said. “So it’s extremely important for people like me to go into these places and say, ‘Hey, I know this is what you’re being told. But this is another part of the story.’”