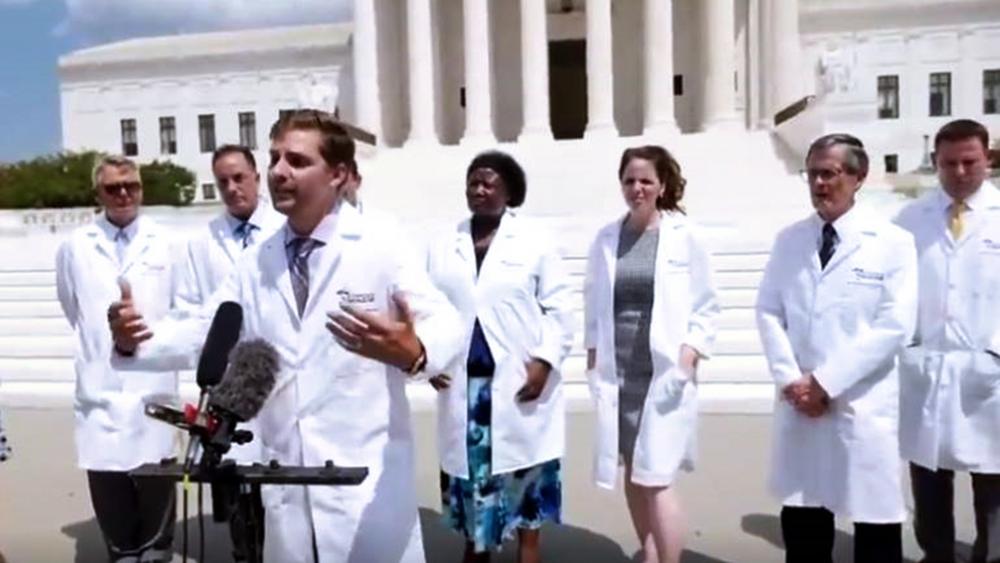 Physicians at the America's Frontline Doctors Summit challenged the media's blockade against medical opinions and studies on the effectiveness of hydroxychloroquine. (Photo: Screen capture via Breitbart video)

Despite a reputable recent major study and a new report from a Yale epidemiological expert that verifies the potential efficacy of hydroxychloroquine (HCQ), tech giants are censoring the message. It seems HCQ has become a politically incorrect drug among the mainstream news media and Big Tech simply because President Trump once referred to it as a possible treatment for COVID-19.

Twitter and Facebook have now censored multiple sites and individuals from having a discussion about the pandemic and the potential treatment. Even Donald Trump, Jr. has been notified that his access to Twitter was restricted after he shared video pertaining to COVID-19 and medical interventions.

The president's son was advised that his actions had violated the social media platform's policy and that he was "spreading misleading and potentially harmful information related to COVID-19."

Big Tech is the biggest threat to free expression in America today & they're continuing to engage in open election interference - full stop. pic.twitter.com/7dJbauq43O

Andy Surabian, a spokesman for Trump, Jr. said, "Twitter suspending Don Jr. for sharing a viral video of medical professionals discussing their views on Hydroxychloroquine is further proof that Big Tech is intent on killing free expression online and is another instance of them committing election interference to stifle Republican voices."

Prager U is another example of a conservative site whose Facebook page was blocked for posting the video. "In the middle of a pandemic, Big Tech should never suppress the voice of frontline doctors who have direct experience treating thousands of COVID-19 patients in America," said Marissa Streit, CEO of PragerU. "It leads one to wonder whether it is being suppressed for political or financial gain? Why would big tech censor the voices of doctors?"

CBN News attempted to access a YouTube video with doctors talking about coronavirus medications and treatments, but the video had been removed for "violating community standards."

The video that is causing the controversy stems from a group of physicians calling themselves "American Frontline Doctors"  – a group of 600+ medical professionals who signed a letter emphasizing that Hydroxychloroquine (HCQ) has been unnecessarily politicized – who are speaking to the public in an effort to reduce fears over the coronavirus pandemic.

The doctors are attending a "White Coat Summit" this week which aims to clarify the misinformation Americans are receiving from sources that lack awareness on key topics pertaining to the virus.

The physicians are determined to shine a light on some of the false claims and fears that are being spread about COVID-19.

Dr. Erickson spoke at the event on Monday and told the audience that, "99.8 percent of people get through this with little to no progressive or significant disease."

Physicians with American Frontline Doctors argue that there are treatments available for people who test positive for the virus, yet these resources are not being utilized.

"This is the first time, historically, that we've told patients with a disease to go home in isolate...it's never happened before," one physician said. "It's almost insanity. We're letting patients perish unnecessarily."

Several doctors who attended Monday's event said some of the deaths related to the coronavirus could have been prevented.

One female physician contends there is a medical "cure" for COVID-19 and another said that hydroxychloroquine's use is "being blocked because of politics" and that the medication should be available "over-the-counter."

The White Coat Summit was slated to broadcast on Facebook, but that link has also been removed.

Additional medical experts are reporting on the success that patients are having with hydroxychloroquine.

CBN News recently reported that Dr. Harvey Risch with the Yale University Public School of Health said hydroxychloroquine, as an early treatment, is "highly effective, especially when given in combination with the antibiotics azithromycin or doxycycline and the nutritional supplement zinc."

Risch explained that the drug works against the virus when taken early before it multiplies throughout the body. He said some physicians who prescribed hydroxychloroquine to patients are now being scrutinized for their actions.

And a recent major study from the Henry Ford Health System in Michigan said the drug "significantly" cut the death rate of patients.

"Treatment with hydroxychloroquine cut the death rate significantly in sick patients hospitalized with COVID-19 – and without heart-related side-effects," the health organization reports.