Christianity - The Next Target of the 'Cancel Wars' 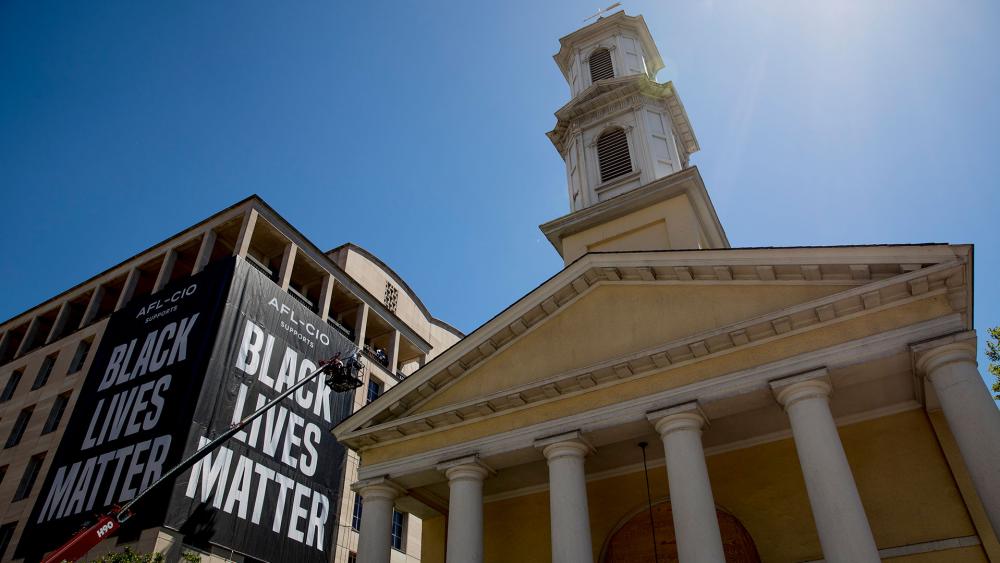 St. John's Episcopal Church across from the White House was attacked and damaged by protesters (AP Photo/Andrew Harnik)

As protests have escalated in the push for racial justice, the latest polls show a majority of Americans agree with efforts to tear down Confederate statues.  But now radicals are pushing way beyond that mark in a fight to completely cancel anything they find offensive, from George Washington to Jesus Christ. Next stop: your churches.

In Washington, they already burned part of the historic St. John's Church a couple of weeks ago.  But all you heard in the media was that the "evil" Trump cleared out protesters so he could walk over to the church and hold up the Bible for all to see.  The prelude aside, what I noted was our President taking a stand against an evil attack on churches being perpetrated by violent rioters – drawing a spiritual line in the sand to say that the evil would not stand against the true Word of God.  To the "liberal" churchmen and ladies, and to some others whom Trump has reaching for the smelling salts, it was just another bad act from "Orangeman."  From where I sit, it looks to me like he's one of the few trying to defend our beliefs.

Now The Washington Examiner points out, "Christian figures and symbols have increasingly become the subject of debate as protesters across the country demand a reckoning on racial justice..."

Did you catch what Shaun King, one of the far-left activists pushing for radical change, said about statues that show Jesus with a fair complexion?

In a series of tweets Monday reported by CBN News, King said all images depicting Jesus as a "white European" should be torn down because they are a form of "white supremacy" and "racist propaganda."  He went on to tweet that all imagery, including "murals and stained glass windows of white Jesus, and his European mother, and their white friends," should be taken down.

I'm the first to say that Jesus of Nazareth was a Middle Eastern Jew; it is most unlikely that his skin was lily white.  But over the centuries since His resurrection, those who have had their lives transformed by Him have usually thought of Him as being like themselves in looks. Our dear Ethiopian brothers and sisters have for 1,500 years created art depicting our Savior as a black man.  As a white girl, I'm not offended by that.

As the Bible makes clear, Jesus Christ came to save ALL people, no matter their race or color.  We are of ONE blood, ONE race, created by a God who loves us ALL.  But that tenet which was taught by Dr. Martin Luther King, Jr. and Billy Graham, and millions of other Christians, is not what the Black Lives Matter organization believes.  The mere fact that my skin is white makes me irredeemable to some, and my Christian faith not worthy to even be spoken of, much less proclaimed as the answer for the world.

I know that's not what all of you brothers and sisters who marched with them were saying.  For many of you, it was a protest against what happened to George Floyd, or for the times you got pulled over just because you were black, or to call attention to miscarriages of justice on many levels.  All very good reasons to march.  But the radicals don't care about that...really.  It's a revolution to them, and that makes this a most opportune time to push their agenda to overthrow America and put themselves in charge.  That agenda says Christianity has to go because true Biblical Christianity has always been about freedom and equality. Because all men and women are created equal before God and because of that we ALL have certain "unalienable rights."  That very Biblical belief is actually in our founding document, the Declaration of Independence.  But the far-left elements of the movement don't believe in freedom of religion.  They believe in censorship and canceling.  See why Christianity has to go, right along with the founders who dreamed of a free nation?

So where will you stand when your church's stained-glass windows are blown out, or your Bibles burned?  Someone has to draw a line right?

There's a clear difference between folks who are pushing for reform and those who are pushing to overthrow America. Who will fix this country's problems? It's not going to be the compromisers or appeasers, or the ones who want to tell you that a man who was never in his life considered a racist until he ran for office is your enemy.  Nor is your ally the one that tells you America is an evil country.  This is a time for soul searching for the entire nation, churchgoers and protesters alike.  If you think in your heart that your black neighbor or your white neighbor or your brown neighbor is not as good as you because of the color of his or her skin, you need to repent before God.

If we are to remain a free people, we as Americans need to stand up for our country and the rights of us all, and resist the evil that would divide us.  Resist in prayer.  At the ballot box.  And if necessary, in a huge group marching PEACEFULLY in the streets and calling our nation to repentance.  Not to become a Communist "utopia" that's never existed in all the earth, but a "more perfect union" where we still know what makes us that "shining city on a hill."