Democrats' Main Impeachment Goal: To Keep Trump from Running for Office Ever Again 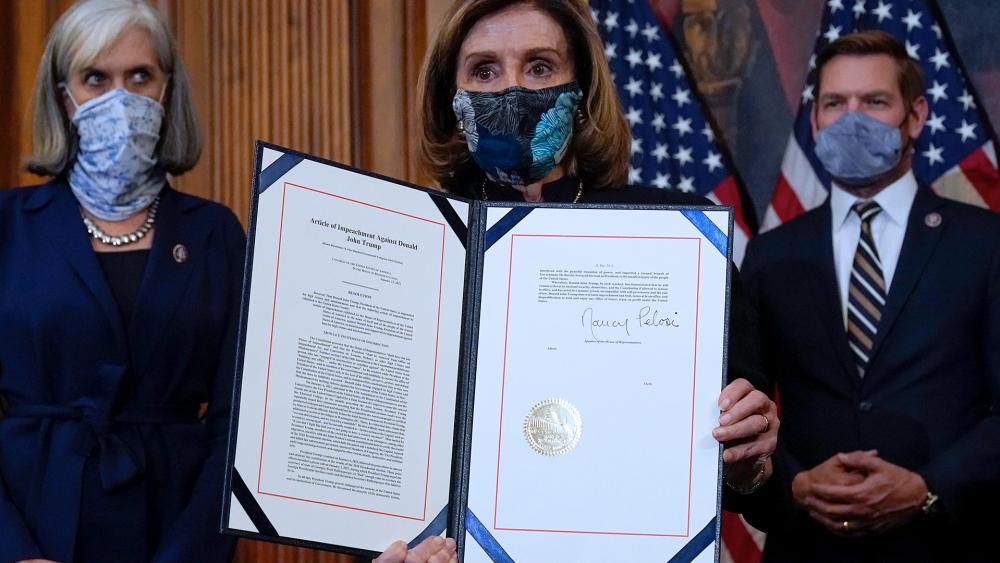 President Donald J. Trump officially became the first US president to be impeached twice by the House of Representatives on Wednesday, paving the way for a Senate trial that could come after his term ends.

Lawmakers who have been in favor of impeaching Trump just days before he leaves the White House argue the goal is not just to remove him from office, but also to prevent him from ever becoming president again.

"He must go," argued House Speaker Nancy Pelosi on Wednesday. "He is a clear and present danger to the nation that we all love."

The single article of impeachment charges President Trump with engaging "in high crimes and misdemeanors by inciting violence against the government of the United States."

"We know we experienced the insurrection that violated the sanctity of the people's Capitol, and attempted to overturn the duly recorded will of the American people. And we know that the President of the United States incited this insurrection, this armed rebellion against our common country," Pelosi claimed.

The impeachment vote took place as National Guard troops protected the Capitol and the House Chamber.

Ten Republicans joined every House Democrat voting in favor of impeachment, while the majority of House Republicans argued impeaching Trump would only add fuel to the fire.

McCarthy believes the president should have been censured for his role in the Capitol attack, not impeached. "The president bears responsibility for Wednesday's attack on Congress by mob rioters," continued McCarthy. "He should have immediately denounced the mob when he saw what was unfolding."

Republican Congresswoman Nancy Mace (R-SC) says both sides share in the blame for the unrest around the country.

"Republicans and Democrats need to acknowledge this is not the first day of violence we've seen. We've seen violence across our country for the last nine months," said Mace. "And we need to recognize, number one our words have consequences, that there is violence on both sides of the aisle, we've contributed to it, we need to take responsibility for our words and our actions, we need to acknowledge there is a problem, take responsibility for it and stop being part of the problem and start being part of the solution."

Following the historic vote on impeachment, Trump issued a video calling for no violence, vandalism, or lawbreaking as he prepares to leave office.

"Now, I am asking everyone who has ever believed in our agenda, to be thinking of ways to ease tensions, calm tempers, and help to promote peace in our country," said Trump in the video.

READ  'NO Violence, NO Lawbreaking': Once Again, Trump and Republicans Explicitly Call for Peace

President-elect Joe Biden released a statement saying he hopes that "Senate leadership will find a way to deal with their constitutional responsibilities on impeachment while also working on the other urgent business of this nation."

Senate Majority Leader Mitch McConnell will not reconvene the Senate until January 19th, ensuring a Senate impeachment trial would not begin until the first weeks of Biden's presidency.