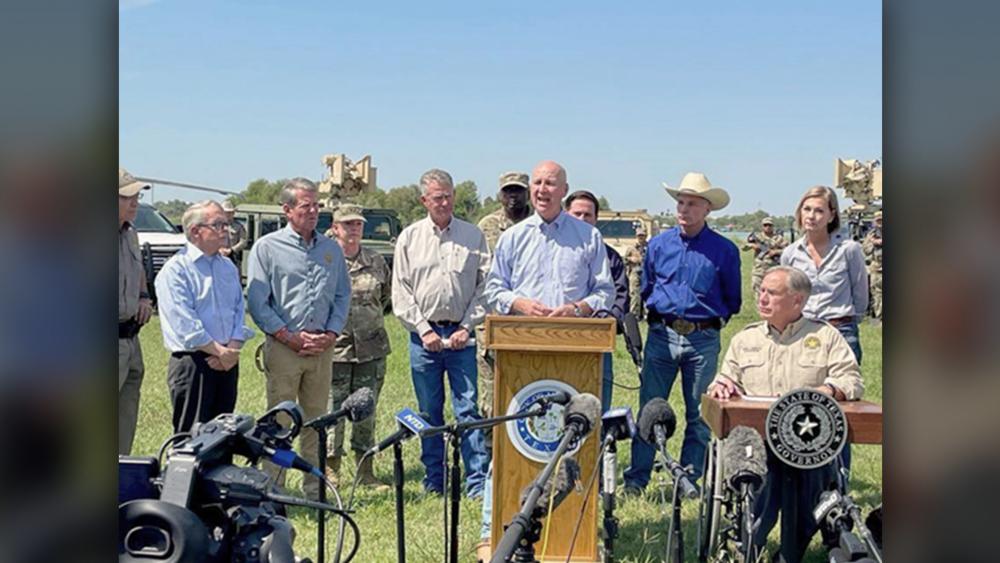 Ten Republican governors visited the U.S. - Mexico border on Wednesday where they unveiled a 10-point plan to end President Joe Biden's immigration crisis at the nation's southern border by stopping the flow of illegal immigrants.

"President Joe Biden has caused a humanitarian crisis and chaos on our border," Gov. Greg Abbott of Texas said.

The governors chose to meet in Mission, Texas, which is part of the Rio Grande Valley region in south Texas. The "Valley," as local residents refer to it, has seen more than 500,000 people illegally enter the U.S. from Mexico in the past 12 months, and the large majority crossed after Biden took office, according to The Washington Examiner.

The governors called on Biden and Vice President Kamala Harris to take the following actions:

As CBN News has reported, while the Trump administration built about 450 miles of new barriers along the southern border, Biden immediately halted construction when he took office, leaving gaps that rendered most of the border wall incomplete.

Critics say Biden inherited a solution when he took office and canceled it, reviving the border crisis that was finally coming under control. Now one million migrants are expected to surge into the U.S. this year alone.

Gov. Ricketts said Biden needs to provide more money for the border, including Customs and Border Patrol, the National Guard, and for the courts to process immigration cases more quickly.

"We are here today to shine a light on what is going on here at the southern border and how it is impacting all of our states, not just the state of Texas," he said.

The governors released a 10-point plan to correct the situation at the border.  The plan is outlined below:

1. Continue Title 42 public health restrictions: The Biden Administration should continue to invoke Title 42 to refuse entry to individuals coming into the country due to the COVID-19 public health risk, which was initially issued by the previous administration. Title 42 currently expels approximately 44% of apprehensions. In July, more than 18% of migrant families and 20% of unaccompanied minors tested positive for COVID-19 upon being released from Border Patrol custody. Reports estimate that the Biden Administration has placed approximately 40,000 COVID-19 positive migrants into American cities.

3. Finish securing the border: The Biden Administration should reopen construction contracts to continue building the border wall and invest in infrastructure and technology, such as lights, sensors, or access roads, to complete the border security system. Upon taking office, President Biden terminated the national emergency at the border, stopped all border construction, and redirected funds to build the wall.

4. End catch and release: The Biden Administration should end the Obama-era policy of catching and releasing apprehended migrants into U.S. cities along the South Texas border, leaving illegal immigrants paroled and able to travel anywhere in the country. Upon taking
office, President Biden issued an Executive Order reinstating catch and release policies that incentivize illegal immigration and make deportation laws difficult to enforce.

5. Clear the judicial backlog: The Biden Administration should dedicate additional judges and resources to our U.S. immigration courts to end the growing backlog and expedite court appearances for illegal migrants. Reports indicate backlogged cases total more than 1 million, the most ever.

6. Resume the deportation of all criminals: The Biden Administration should enforce all deportation laws of criminally convicted illegal aliens. Upon taking office, President Biden issued an Executive Order ordering the U.S. Immigration and Customs Enforcement to prioritize only the deportation of aggravated felons, gang members, or terrorists, leaving other criminals to remain in the United States.

8. Re-enter all agreements with our Northern Triangle partners and Mexico: President Biden should re-enter the prior administration's agreement with the Northern Triangle countries (El Salvador, Guatemala, and Honduras) and Mexico. The countries agreed to enforce their respective borders, fix their asylum systems, and receive migrants seeking asylum before they journey north to the United States. Upon taking office, President Biden issued an Executive Order terminating the agreements.

9. Send a clear message to potential migrants: President Biden, Vice President Harris, and Biden Administration officials at every level should state clearly and unequivocally that our country's borders are not open and that migrants seeking economic opportunity should not attempt to abuse or misuse the asylum process. Prior to and after taking office, President Biden blatantly encouraged illegal immigrants to come to the United States.

10. Deploy more federal law enforcement officers: Due to overwhelming needs at the border, the Biden Administration should deploy more and provide greater resources to U.S. Customs and Border Protection officers and U.S. Immigration and Customs Enforcement agents. Due to a lack of federal resources, Arizona and Texas have had to initiate an Emergency Management Assistance Compact to request law enforcement resources directly from states, receiving offers from eight states, to arrest and detain illegal trespassers.

When asked if the trip was more about politics than confronting immigration issues, Iowa Gov. Reynolds replied, "No it's not a political stunt."

"This is the real thing. Biden owns this," she said. "This is a self-inflicted crisis. He overturned all the policies that worked."