Rick Warren Preaches Final Saddleback Sermon After 43 Years, and It's the Same as His First - Here's What He Said 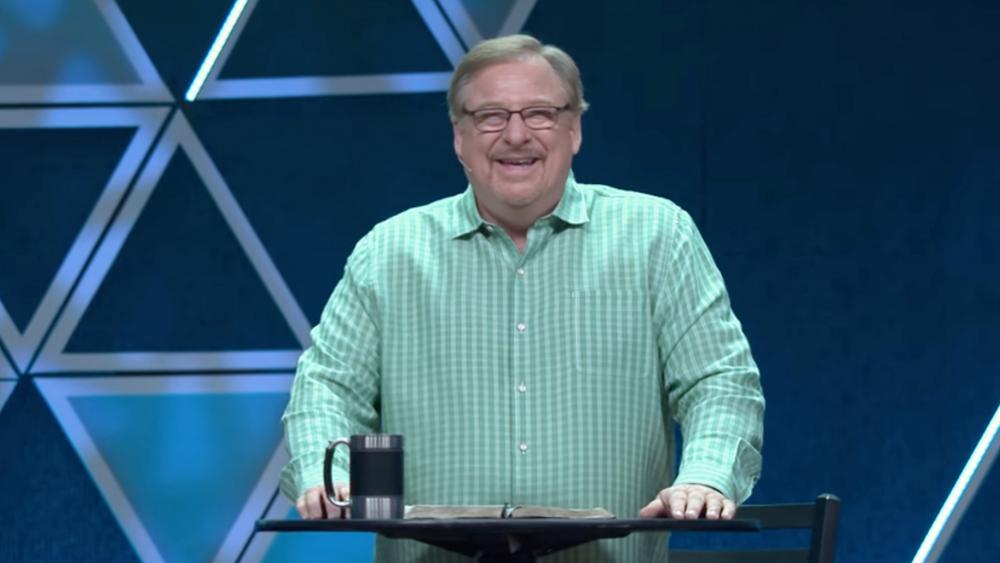 Rick Warren, the founder and senior pastor of Saddleback Church, has preached his final sermon to his Lake Forest, California congregation.

"You're going to make me cry. Have I told you lately that I love you?" Warren, 68, said after he came on stage to applause from the congregation on Aug. 28. "It has been my privilege to love you, pray for you, serve you, encourage you."

Standing behind the same hand-carved pulpit made by a church member the first year of Saddleback's existence, Warren closed out his 43 years of service by saying he's preached 6,500 sermons and studies in those four decades.

But on Sunday, he announced he would conclude with the same sermon he started with in 1980. "I have decided to repeat and re-preach the very first message I preached when starting this church, word for word, 43 years ago."

He urged the audience to "invest" their lives in something of eternal value.

Only around 50 people attended that first Sunday service on March 30, 1980, at the Laguna Hills High School, according to Christian Headlines.

Warren, a graduate of California Baptist University in Riverside, had received his Master of Divinity degree from Southwestern Baptist Theological Seminary just a year earlier.

Now known as one of the largest churches in the United States, Saddleback has grown to have more than 20,000 people attend services each week. According to the church's website, it has over 200 ministries and 11 campuses in the U.S. and in Germany, Argentina, China, and the Philippines.

During his sermon, Warren talked about a familiar theme that has made him a household name – being "purpose driven."

In 1995, Zondervan published his book The Purpose Driven Church: Every Church Is Big in God's Eyes, and in 2002 published a sequel, his New York Times best-seller The Purpose Driven Life. As of 2020, the book has sold more than 50 million copies in 85 different languages. The success of the book allowed him to give away most of his income and re-invest in the church and others.

The title of Warren's sermon that first Sunday was 5 Reasons This Church Is Guaranteed to Succeed. "It is good for churches to pursue success," said Warren. "God doesn't sponsor flops. After all, the church is Christ's body and it is God's will for every church to grow," Church Leaders reported him saying.

Warren explained, "Success is not size. Success is changed lives. You'll hear me say that a thousand times in the years ahead." He pointed to church health over church growth. "Healthy churches grow," he said.

Warren said God has five purposes that are summarized in the Great Commission and in the Greatest Commandment.

These purposes are encapsulated in the motto of Saddleback Church, according to Church Leaders.

Warren then went through a list of goals for the congregation, including the dream of welcoming 20,000 members into the church fellowship, discipling, training church leaders, sending out missionaries to every part of the world as well as adding a new church plant every year that Saddleback existed, Church Leaders reports.

"All of these dreams will be realized," he said. "Why? Because they're inspired by God and they're for his glory."

The retiring Saddleback senior pastor ended his message by asking the audience to join in the next part of the church's journey with new pastors Andy and Stacie Wood.

"I love you all so much," Warren said. "I know God, and the best is yet to come because this church is destined for greatness."

As CBN News reported in June, Warren announced his coming retirement last year in part because of ongoing health issues. He has been diagnosed with spinal myoclonus, which causes tremors and blurred vision, a condition that has gotten worse in recent years.

Warren also announced the church had named Wood, 40, as the new pastor and leader of the Saddleback Church. Wood had been leading Echo Church in San Jose along with his wife Stacie, a teaching pastor at Echo alongside her husband. Like Saddleback, Echo Church has ties to the Southern Baptist Convention.

In the mid-2000s, prompted in large part by his wife Kay, Warren and the church became active in responding to the global AIDS pandemic and to addressing poverty overseas, in particular in war-torn Rwanda.

At home, the church began Celebrate Recovery, a Christian 12-step-inspired program to help people deal with their "hurts, habits, and hang-ups." The program has been adopted by tens of thousands of churches around the country, according to Religion News. After years of struggle with mental illness, their youngest son, Matthew, committed suicide in 2013, prompting the Warrens to become advocates for those with mental health issues and minister to those affected by suicide.

Saddleback will celebrate the Warrens in early September, then turn the care of their beloved congregation over to the new pastors on September 12.

"For decades, we have admired and respected Pastor Rick and Kay Warren, and their work through the Purpose Driven Church model has been critical," Wood said in a statement. "We've been so blessed by their friendship, and after months of prayer and seeking counsel from others, we believe that God has called us together to step into serving at Saddleback Church."