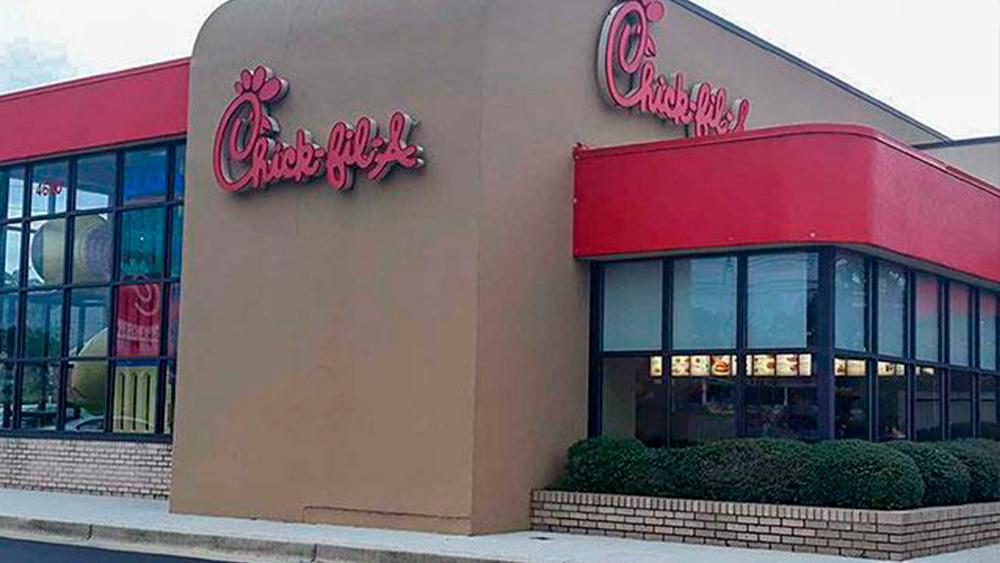 Chick-fil-A is known as a company based on Christian principles, but there's a new Chick-fil-A location being constructed in Marshal, Texas that's literally being built on the word of God.

David and Holley Snow, the franchise's owners, wanted to accentuate that their restaurant will "glorify God" and bless people. The Snows couldn't be there for the pouring of the foundation due to the birth of their second child Wynter. So they had their 4-year-old son Montgomery place a Bible, opened to Joshua 1:9, in the foundation during construction, according to the website Church Leaders.

Found in the Bible's Old Testament, the scripture is the Lord God speaking to Joshua as the new leader of the Israelites, telling him to "be strong and courageous" as he prepares to cross the Jordan River into the promised land.

"Have I not commanded you? Be strong and courageous. Do not be frightened, and do not be dismayed, for the Lord your God is with you wherever you go." -- Joshua 1:9

KNUE Radio reports the Snows figured "what better way to start a legacy in this community than with their children — the future."

"While we do serve delicious food, people are what's most important to us," the Snows wrote in a social media post. "Our purpose here is simple—to glorify God by being a faithful steward of all that is entrusted to us and to have a positive influence on all who come in contact with Chick-fil-A."

As CBN News reported, Chick-fil-A has topped the list of Americans' favorite fast-food chains for the last seven years.

The Snows' decision to place a Bible in the foundation of their restaurant did not go unnoticed by detractors on social media.

Critic Eric Skwarczynski posted photos of the burial and wrote, "They buried a Bible under their Chick-fil-a."  He then asked a follower to "make sense of this."

One user replied, "I don't know if I'd do it with an actual Bible, but I could easily imagine burying some sort of Biblical inscription. And I like the thought, if not quite the idea of destroying a perfectly good Bible."

Another wrote, "Actually, now that I think about it - I have an extremely worn Bible that my grandmother gave me when I was six. That would be perfect for something like this: an honorable disposition of something I loved that has otherwise served its purpose."

And another user replied, "When my folks were building their house, my mom put red ribbon in the walls to represent the blood of Jesus. The builders put the drywall up in 2 rooms & she made them take it out & redo it so she could put the ribbon in. They thought she was in a cult. What a great witness."

One user even joked they placed the Bible there to keep Skwarczynski out. But he even confessed he likes Chick-fil-A.

"On the contrary, I go way too much. That spicy chicken sandwich is too good. (Doesn't hold a candle to Popeyes tho)," he wrote.

The Snows are Christians and East Texas natives.  David, 32, played football at the University of Texas, graduating with a degree in corporate communications. He had a brief NFL career with the Buffalo Bills and the Pittsburgh Steelers as an offensive lineman. He received his MBA from LeTourneau University in 2014.

Holly graduated from the University of Texas in 2008 with a degree in broadcast journalism. She previously worked as a news reporter/anchor at KTRE, an ABC-affiliate television station before marrying David in 2012.

Construction on the Snows' Chick-fil-A location is proceeding. The franchise shared photos of their progress last month.

Church Leaders reports the owners' move to East Texas will be gradual. David will operate the restaurant, while Holley will stay in Austin with their infant daughter. Wynter has Down syndrome, a congenital heart defect, and an esophageal issue.

At just three days old, the girl has already had surgery to repair her esophagus, the first surgery of many Holly wrote in a Facebook post announcing Wynter's birth last October.

"We named her after Rhea F. Miller, the woman who wrote, 'I'd Rather Have Jesus' — a song I couldn't get out of my head before we ever were told any news about our girl," the Christian mother wrote. "We decided early on, we would rather our children have Jesus than anything else this world says is 'normal.'"

"Heaven is the goal, & if our girl can worship Jesus & point others to Him, it's worth more than silver or gold, houses or land, man's applause or anything this world affords," Holly explained.

"We truly believe that. Wynter is an answer to countless prayers, a daughter of the King & an absolute miracle — unlike anything we've ever witnessed on this Earth," she added.