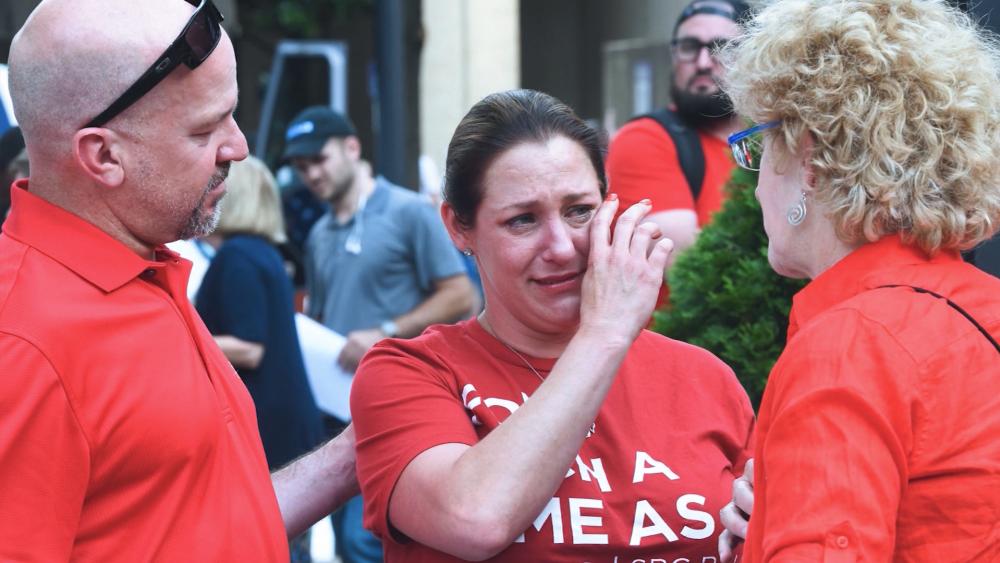 ANAHEIM, CA – When Southern Baptists voted for abuse reform at their annual meeting in June it represented a watershed moment after years of some of the denomination's top leaders stonewalling and ignoring victims' pleas for help.

As recently as 2019, Jules Woodson and other Southern Baptist abuse survivors stood outside the annual meeting in Birmingham, Alabama. They hoped that their presence and a bombshell "Abuse of Faith" Houston Chronicle report that revealed hundreds of victims of church pastors, would encourage leaders to hear their concerns.

Instead, they experienced distrust and outright scorn from some of those attending the meeting, known as messengers.

Survivor Dave Pittman, who suffered as a boy at the hands of his music minister recalls "the vitriol – the words that survivors were called by messengers walking into the convention. It was nasty."

Fast forward to October 2021 when the executive committee (EC) of the Southern Baptist Convention (SBC) agree to uphold a vote at the June 2021 annual meeting to waive attorney-client privilege as part of an outside, independent investigation into the committee's handling of sexual abuse reports. The decision allowed investigators access to communications between staff and legal counsel and an inside look into how leaders handled allegations. In May, the denomination's sexual abuse task force released the Guidepost Solutions report.

The stunning document, just under 300 pages, revealed how EC members and staff failed to properly respond to abuse reports over the last twenty years. It showed patterns of stonewalling and rebuffing victims and even credible reports of sexual assault by former SBC president Johnny Hunt. That report and follow-up recommendations by the task force led to significant change at the 2022 June annual meeting in Anaheim, California.

Outgoing president Dr. Ed Litton lamented the investigation, calling it a "gut punch" and the messengers ultimately approved a database to track predators in churches, the formation of a new abuse task force to consider further reform and a resolution that formally asked Woodson, Pittman and other survivors for forgiveness.

A small group of survivors not only attended the meeting but were encouraged to use a recovery room stocked with refreshments.

After the key votes, they greeted members of the abuse task force with hugs and tears.

"Now there's action," Woodson told CBN News. "There's something tangible that survivors can cling to and say 'they are doing something new.'"

Survivor Tiffany Thigpen said she hoped the votes would pave the way for more focused attention on the issue. "It's such a freeing feeling to think that maybe we can begin to do the work that we always wanted to do which is to hold abusers to account, to be able to keep them from moving to church to church and to keep people safe," she said.

Messengers like Dana Hall McCain and pastor Griffin Gulledge said that this year, Southern Baptists were determined to not only lament an egregious track record but begin to do right by survivors.

"I think anytime you have sin in your midst you must address it," said McCain.

"We care about abuse victims. We are horrified by what's been revealed and we came here to do the right thing," said Gulledge.

Newly elected president Bart Barber has vowed to turn the tables and make abusers the ones who feel unwelcome.

"It is time for Southern Baptists to realize how nimble and resilient our Baptist polity can be," he said, "to put sexual predators on notice that Southern Baptist churches are a dangerous place for them."

Barber will soon name those he's appointing to the new abuse task force, which will implement the predator database and consider a survivor memorial as well as an ongoing care fund.

Pittman says such a fund is vital for those who've been betrayed by their pastor or church leader.

"The very least that the SBC could do would be to create a fund to help them, to get them back on their feet," he said. "Because they would not be in that situation had [not] a minister of the SBC molested and raped them and destroyed their lives and destroyed their faith."

SBC pastor Todd Benkert has long called for abuse reform. "I think the real crisis for us has been how we respond when abuse does happen," he told CBN News.

The challenge he sees now is reaching the grass roots and changing the culture. "We have state conventions, local associations, local church – every single layer of that has different things that we need to do to address this issue," he said.

Other pastors, like Javier Chavez, say they're committed to helping survivors but want to avoid rushing new policies into place.

Chavez told CBN News he's concerned that the new database could smear an innocent pastor. "Let's not also make it a denominational, political witch hunt which is very common in scenarios like that," he said.

The sexual abuse task force says only those credibly accused will be named in the database. That could include someone who confesses to sexual abuse or has received a legal conviction or civil judgement.

For now, survivor advocates are waiting to see how the reforms play out as they continue to support other survivors.

"I do believe in the individual survivors who need to know and hear from me and other survivors that they're not alone and they can reach out," said Pittman.

"The cost is so great and it's something a lot of people don't realize," said Woodson. "But I do this because I don't want anyone to ever have to go through the trauma, the pain, the heartbreak, the destruction that became my life after my abuse. If I could just save one person from even feeling like they're alone, having been through it, then it's worth it to me."